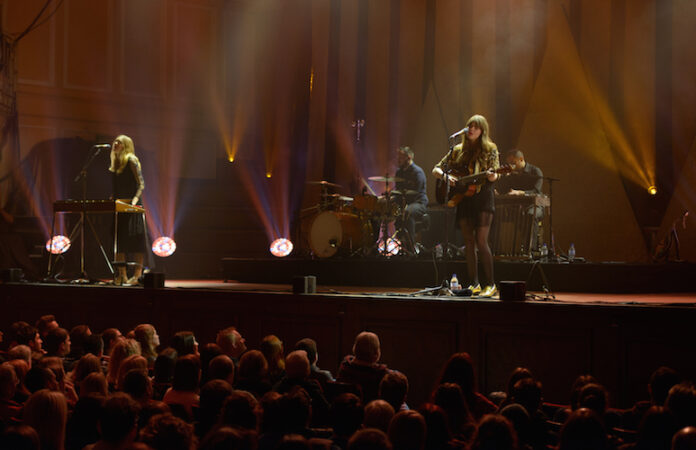 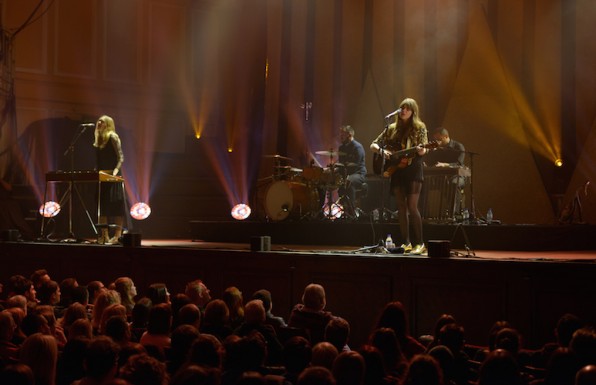 Newcastle City Hall could be a daunting venue for most bands, yet First Aid Kit take it in their stride and proceed to wow a packed audience with a breathtaking performance packed with surprises. Louder Than War’s Lee Hammond is left stunned and speechless.

Tonight one of Newcastle’s oldest and most iconic venues plays host to two sisters who are at the top of their game right now. Following the release of their third album – last year’s Stay Gold – they’ve taken to the road to bring their blend of Americana folk pop to the masses.

To some artists a venue such as the City Hall would be daunting, not First Aid Kit though. Opening up with the title track to their second LP, The Lion’s Roar they dispel any myths of nerves as they set about creating a Tuesday night party atmosphere. Whilst they maintain that atmosphere they do intersperse it with some of their more sombre works.

Blue creates a more suitably downbeat atmosphere but they’re quick to lift that, its safe to say that Stay Gold is a lot more upbeat when put alongside their previous works. My Silver Lining is the obvious stand out track, but Shattered and Hollow sound beautiful this evening, delicately picked guitar coupled with Johanna and Klara’s sweet, intertwined  voices. 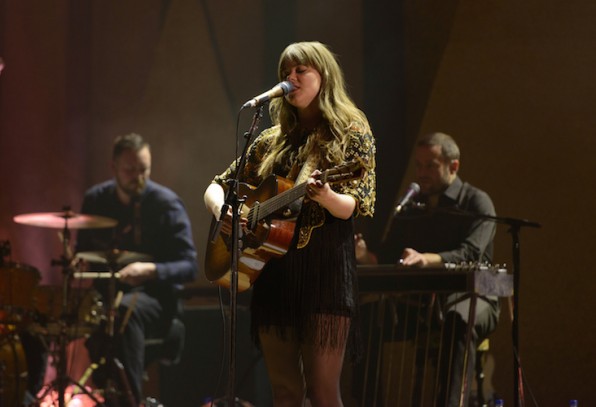 What they go on to do next is nothing short of breathtaking, they both take to the front of the stage and do something that so few other bands would never dare to do, we’re left dumbfounded. Without the aid of amplification just the sheer power of their voices they silence this huge hall with a beautiful rendition of Ghost Town.

It’s unbelievable and adds a whole new dimension to the evening, the amount of talent that these ladies possess is incomprehensible. It would have been amazing had they carried this theme on, yet I feel it may have spoilt the beauty of it at the same time.

The latter part of the set keeps the party going, with the aforementioned My Silver Lining going down a storm, but then another curveball from these ever-brilliant Swedes. A cover of Jack White’s Love Interruption, again showing their versatility they play it with the true ferocity that, that song demands.

Is there no end to these girls’ talent? Well I’m certainly beginning to think not. Master Pretender sounds every bit as good as it should do. As the band leaves the stage after Wolf, they still have one final surprise in store.

They return to the stage without their accomplices to tell a story of the Polar Music Prize and performing in front of the legend Paul Simon. Before playing arguably one of the best Simon and Garfunkel songs America, by this point we’re tied up in knots as to where they go next. However, they close out with the beautiful Emmylou.

This evening has proved what a talent First Aid Kit truly are, their sweet personalities emanate from the stage and command your respect whilst they dazzle you with their abilities. Tonight has left me filled with adoration and admiration for First Aid Kit as they truly have something very different and very special.

All words and pictures by Lee Hammond. You can check out more work by Lee at his Louder Than War author’s archive.