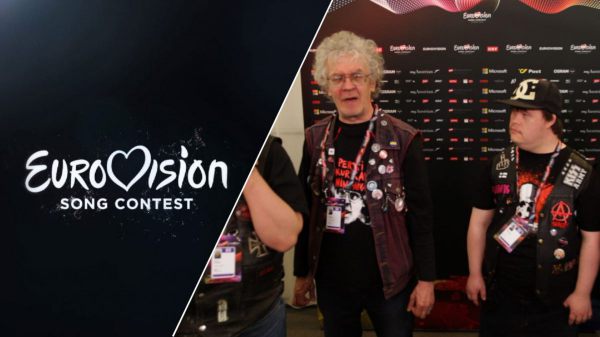 We have been keenly following the progress of Finnish punk band Pertti Kurikan Nimipäivät (PKN) as they initially suggested entering the Eurovision Song Contest 2015, to being selected to represent their home country Finland in a live TV vote; was this the chance to get a real working band, a punk band at that into Eurovision and no mater what the outcome to be broadcast to a worldwide TV audience of 195 million – At any given moment, an average of 61 million people were watching the 2014 show; can you imagine if just half of 1% took and interest in the band, visited their website then actually bought a CD etc…

Sadly the dreams of PKN came crashing down around them during the first semi final in Vienna as they were voted out by the judging panel – They are one of six entries going home, along with Danish boyband Anti Social Media – the first time Denmark has failed to get to the final since 2007.

Fans of PKN reacted to news they had not been voted through to the final, after they ranked among early favourites with bookmakers across Europe; taking to Twitter to express their disappointment;

Nitin Sood ‏wrote: “PKN made me proud of Finland. Thanks for being amazing, talented and gifted guys. I wish I had your strength and courage.”

Matt, tweeted: “Fuming that the Finland entry for #Eurovision didn’t get through. 4 guys with learning difficulties giving it their all to rock.”

Those of here in the UK can look forward to the delights of Electro Velvet performing ‘Still In Love With You’…or not.

If anyone remains interested Eurovision Grand Final will be screened live on Saturday 23rd May 2015.

PKN gained worldwide attention following the release of the documentary about their lives entitled ‘The Punk Syndrome’, whilst the band’s T-shirts bear the slogan ‘Can You Go On Stage With Shit In Your Pants?’

Each member of Pertti Kurikan Nimipäivät has grown up with learning difficulties and disabilities, the band have described how they have found ‘expression, release and noise in punk rock’.

In December 2014 they toured the UK for a second time with London based Oi! band Hard Skin, and have previously toured in Canada.

This development does not yet mean PKN will be gracing the Eurovision stage in Vienna, Austria in May, they still have to win through their national selection rounds – we would urge any readers in Finland, or people with friends there to vote for PKN, this could be the punk event of 2015!.

Pertti Kurikan Nimipäivät win in Finland! As such PKN will be at Eurovision 2015.

The Finnish entry was decided in a live televised show on Saturday 28th February 2015; Satin Circus won the jury votes, which only accounted for 10% of the total result. When the televotes came in it was clear that Pertti Kurikan Nimipäivät was the winner and thus will represent Finland in Vienna.

Their winning performance is available On Demand