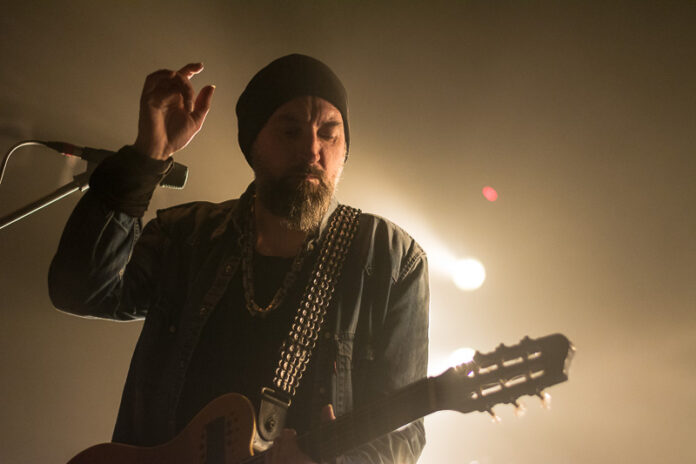 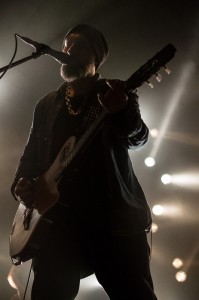 Fink is on the road again, touring throughout Europe right now. As part of the promo-tour for their newest album Hard Believer, they visited Slovakia last night – the fourth time already within the last five years. A surprisingly large following, built up gradually since they first performed there in 2009, resulted in a crowded, sold-out venue: a thousand fans gathered to see – but first of all hear – Fin(k) and his band live. And they indeed got what they came for: one and a half hour of older Fink hits as well as several songs from the recent album.

The bearded trio we know as Fink, i.e. Tim Thornton (drums), Guy Whittaker (bass) and frontman Fin Greenall (switching between his four guitars), were for this tour also joined by Chris Nicholls (guitar). Looking every bit as indie as his music sounds and backed by a live band, here stood a charismatic singer with an acoustic guitar (which he at times used as a percussion too) – without knowing, no one would be able to guess his past as a rave DJ. Although subtly, the electronic influences are still there; the newest songs tend to sound way less folksy than previous albums and lean more towards rock. For those who have never heard their music before, it could be described as a bit mystical, bit bluesy, very rhythmical, with an impressive voice on top of all that. A prime example of how simple repetitive patterns can create something far greater than its individual parts.

Alas, I must admit I wasn’t very impressed by their light show. Fink have their own light production for the tour and are often cited praising their light technician. It sounds like a very important aspect of their show and they make sure every concert is lighted exactly the way they prefer. But… imagine more than a dozen music photographers standing in the photopit shaking their heads in disbelief, going from eyerolling all the way to having a laugh about the absurdity of the situation. We could hardly see their faces although we stood right under the stage. The ultimate challenge: to take interesting pictures of a band who are lit rather dimly, boringly and primarily from behind, all this through a yellowish or grey-colored fog. I know they were trying to convey a certain feeling, but if they actually did, it was thanks to the music and rather in spite of the lighting. What might perhaps be suitable for an intimate club atmosphere does not always turn out very impressive on large stages.

I would say, go see Fink live by all means, but when you are already there, it would make no difference even if you closed your eyes, as most of the time you would only miss silhouettes partly covered in fog under moving yellow spotlights. Nevertheless, the music would definitely make up for it and pleasantly inspire you to see a better – your own – show behind your eyelids.