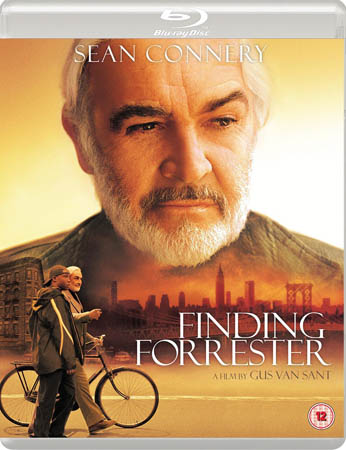 Jamie Havlin takes a look at an acclaimed film about the relationship between a reclusive novelist and a gifted young basketball player with writing aspirations of his own.

The film opens with a clapperboard snapping shut and a teenager rapping in a grim Bronx neighbourhood with a skyline dominated by blocks of monolithic flats.

This is where Jamal Wallace (Rob Brown) hangs out with his pals shooting hoops. He’s obviously the standout player, an exceptionally talented athlete and he’s clever too: he is soon offered a scholarship to elite Manhattan academy Mailor-Callow and he harbours a dream of becoming a novelist, so spends half his time wanting to be the next Michael Jordan, the other half striving to become the new James Baldwin.

As a dare, he agrees to break into his apartment of a local recluse known by the local kids as ‘the Window’ due to the amount of time he spends gazing out his apartment with his binoculars.

This is William Forrester (Sean Connery), the subject of urban myths and a man who never ventures outside and whose only human contact consists of visits from a younger man who brings him supplies of food and drink – and by drink I mean mainly whisky. Well, he was born in Scotland after all (which explains an accent I wouldn’t imagine being too common in the South Bronx).

As Jamal prowls inside the Forrester’s living room – cluttered with antiquated furniture, piles of dusty books by the likes of Chekhov and Kierkegaard and a typewriter – he is startled by the older man.

He rushes out, inadvertently leaving behind his backpack which contains a notebook with some of his writing. This is returned to him, annotated by Forrester, which intrigues the teenager.

Forrester can be infuriating but also displays occasional glimpses of sarcastic humour as when Jamal asks if he’s read all the old books decorating his home, the recluse replies: ‘No, I just keep them to impress all my visitors.’

The pair begin to bond over their love of writing and, as their friendship flourishes, Forrester begins acting as a mentor, while his protégé helps him confront his inability to face the outside world, both developing a deep admiration for one another along the way.

Jamal learns that his new friend is the author of a single novel Avalon Landing, a Pulitzer winner which he is currently studying in his English Lit classes – and I should point out here that there are a number of colossal coincidences in the plot and to enjoy the film fully it’s best if you can utilize some heavy duty suspension of disbelief.

There’s also a subplot of a possible romance with a wealthy student at Mailor-Callow, Claire (Anna Paquin), which is never developed sufficiently but despite these flaws the film is still very much worth watching, the best thing about it being the performances of the two leads.

Despite his Oscar winning turn in The Untouchables, Sean Connery still might be said to be an under-rated actor; think Marnie, The Offence and The Name Of The Rose for starters although he’ll obviously always remain best known for his iconic role as James Bond.

Here the chemistry between himself and newcomer Rob Brown is outstanding. It’s said that Brown only auditioned for the film in an attempt to make enough money to pay off his rising mobile phone bill and yet, cast as a lead despite a complete lack of any acting experience, he delivers a sensational performance.

Both were unfortunate not to at least earn Academy Awards nominations.

Gus Van Sant is an unpredictable director and this is much, much closer to one of his more populist movies such as Good Will Hunting – Matt Damon even pops up in a small role – than to his more experimental films like as his risible shot for shot remake of Psycho.

In addition to Good Will Hunting, Finding Forrester might be also be compared to Wonder Boys and even, in one scene on the basketball court, The Loneliness Of The Long Distance Runner.

It’s one of Van Sant’s most enjoyable works and like Connery’s acting, it’s also under-rated.

Trivia: Although the film is entirely fictional, Connery later acknowledged that he drew inspiration for his role from J.D. Salinger, the author of The Catcher In The Rye.

Forrester in the film is said to have won the 1954 Pulitzer Prize for Fiction although no Pulitzer award for that category was given in 1954.

For more on the film visit Eureka Classics.