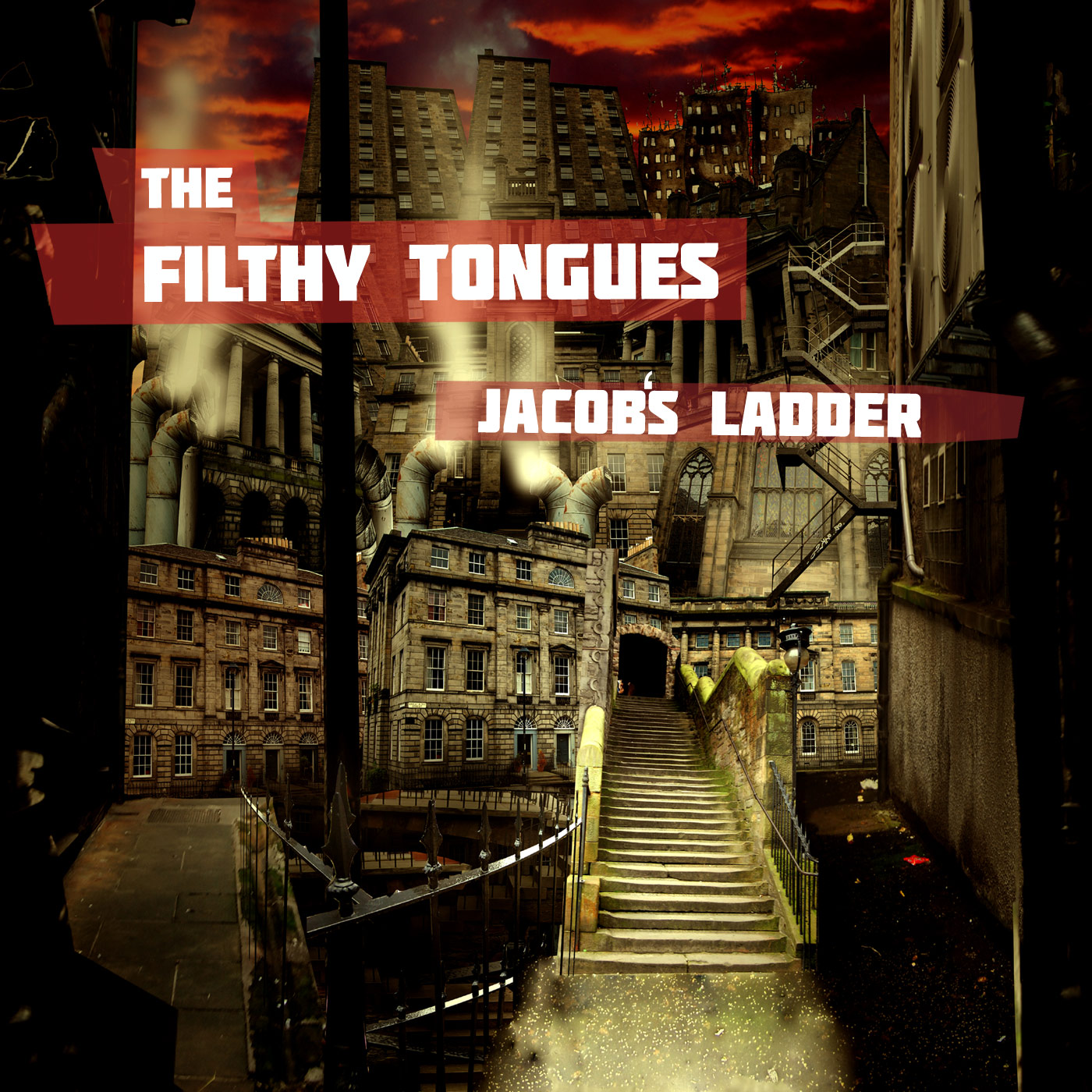 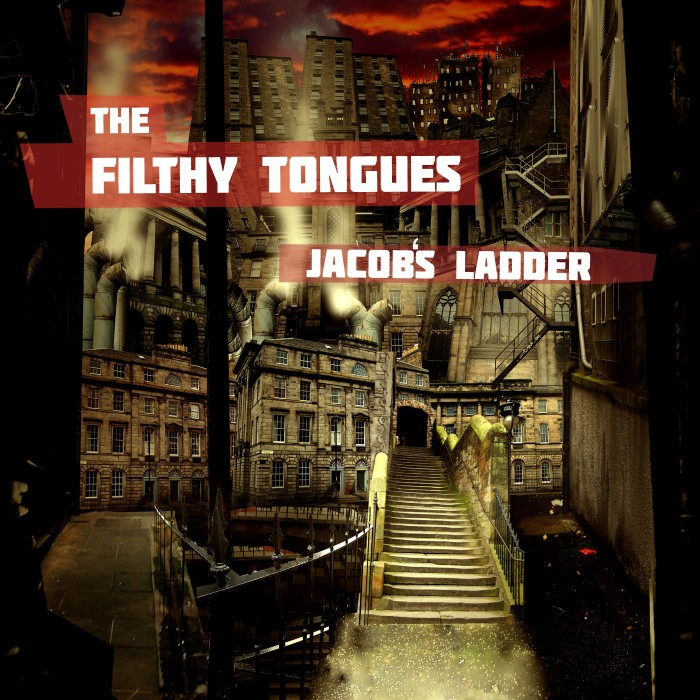 Former Goodbye Mr Mackenzie core trio deliver a vivid and visceral exploration of Edinburgh’s underbelly that recalls Nick Cave & the Bad Seeds at their most intense.

Goodbye Mr Mackenzie are fondly recalled as a relentlessly hard-gigging Scottish band who never quite made the commercial  breakthrough they deserved. Keyboardist Shirley Manson went on to international fame with Butch Vig’s band Garbage, but the band’s core trio of Martin Metcalfe, Fin Wilson and Derek Kelly have built a cult following as Isa & the Filthy Tongues, featuring Stacey Chavis on vocals.  With Chavis taking a break from her frontwoman duties, the Isa-less Filthy Tongues have embarked on some intriguing ventures, most notably a jaw-dropping collaboration with poet Paul Hullah, ‘SCENES’.

‘SCENES’ is a limited edition book of artwork by Metcalfe, containing poems by Hullah and an EP of breathtaking musical collaborations between the epiphanic poet and the stripped-down post-punk band.  I can’t over-look the opportunity to share one of its highlights with you, so take a few minutes to take a  listen:

Hullah has now returned to his professorial duties in Yokohama, and The Filthy Tongues have recorded their debut album, ‘Jacob’s Ladder’, its eight songs written by the Cerberus- like creative triumvirate of Metcalfe, Wilson and Kelly.

Metcalfe describes the album as “Pleasingly grotty and more than a bit gothic. All based around a dark neo-feudal Edinburgh’.  The Edinburgh backdrop- and no, we’re not talking about the pretty, tourist-friendly side of Scotland’s capital here- adds layers of reality and grubby affection to an album that explores the darker side of life with relish, revelling in gallows humour and precise, evocative imagery that demonstrates first-hand knowledge of the city’s sub-culture.

Overall, the mood is reminiscent of Nick Cave & the Bad Seeds at their peak; ‘Tender Prey’ and ‘Henry’s Dream’ are both brought to mind by the tightly-coiled drama and tension of these songs.

Metcalfe really knows how to deliver a salacious lyric, and his vocal delivery exudes an authority and authenticity which has been largely absent from Cave’s skilfully-crafted artisan products over the last two decades. The commonalities between the two singer-songwriters are perhaps the result of shared influences; Metcalfe’s work is steeped in the traditions of Jacques Brel, David Bowie and the Sensational Alex Harvey Band. Harvey was a massive influence on Cave and his co-conspirators even when they were at high school, clearly shaping both Cave’s vocal style and fondness for classic songwriting.

The Filthy Tongues’ songwriting on ‘Jacob’s Ladder’ also brings to mind the much-missed maverick Kirkcaldy-born singer-songwriter, Jackie Leven. Leven’s work explored masculinity and the psychology of men who were addicted to violence and intoxication, mirroring the extremes of his own life, Similar themes are explored to great effect on ‘Jacob’s Ladder.’

Metcalfe, Wilson and  Kelly form a tightly-wound, empathetic trio who could probably improvise till the cows come home without losing the dramatic tension that’s intrinsic to their music.  The songs are rooted in earthy blues and folk chord progressions, but their canny structures and killer choruses demonstrate a love for glam-era Bowie.  It’s classy, confident stuff, but ultimately this is a lyric-driven album, crammed with vivid characters and imagery.

The title track raises the curtain in grand style with a steadily-building sense of foreboding, as Metcalfe incants a fever-dream that takes as its starting point an ancient stone staircase known as ‘Jacob’s Ladder’, near Edinbugh’s Calton Hill. Metcalfe spins an impressionistic tale in which he appears to be seeing visions of the city’s past and present, mingled with scenes of distant lands (Jerusalem is mentioned, in particular).  It’s a heady, powerful opener that sets the scene perfectly.

‘Long Time Dead’ is another highlight, as the singer introduces us to several characters committed to a live-for-today lifestyle, including Danny, memorably described as  “a conquistador on wheels.” “He trundles to the bar”, Metcalfe continues, while building towards a grim but reality-based punch-line, “he lost his leg injecting but he had a lot of fun; he spent a fortune on the first, now he’s working on the other one”.

Building towards an intense conclusion, penultimate track ‘Children of the Filthy’ is another instant classic, a cinematic outsider anthem set to a prowling blues swagger which sweeps into Morricone territory, the filmic atmosphere continuing through the epic, near-mystical finale, ‘Kingdom of Ice.’

During the mid-60s ‘British Invasion’, veteran bluesman Muddy Waters ruefully pointed out that “the kids [in the US] are crying for bread, when they can get it in their own backyard.”  Waters was, of course, referring to American teenagers going wild for British R&B bands like The Pretty Things, Stones and Animals, while ignoring older blues artists closer to home.  Perhaps a similar dynamic is at play here; The Filthy Tongues remain a cult act within Scotland, while US (and Australian!) artists exploring similar territory are fêted.  On the strength of this album, that’s a puzzling state of affairs.

Let this three-headed dog lead you through Edinburgh’s underworld; perhaps it’s not the healthiest of tours, but don’t be surprised if you feel the urge to linger a while.

In concert, The Filthy Tongues are a force of nature, so you won’t want to miss the live dates that accompany the release of Jacob’s Ladder.