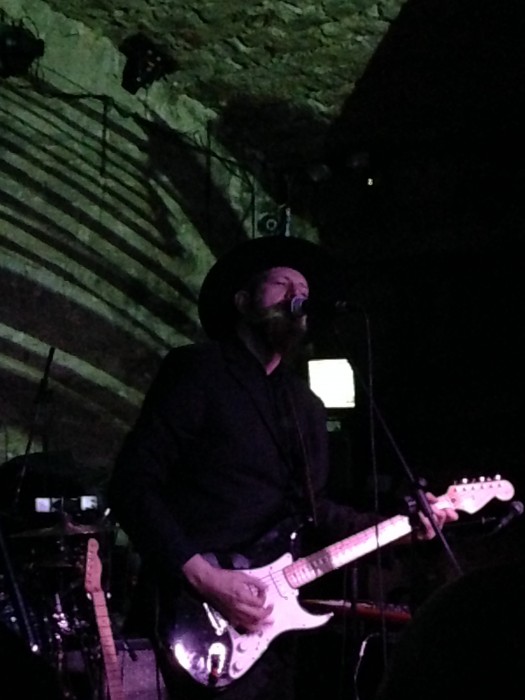 The Filthy Tongues are Edinburgh’s Angelfish minus Shirley Manson (Garbage), the band whose pedigree delineates back to the beloved Goodbye Mr Mac Kenzie, and with the visual and sonic artistry of Martin Metcalfe at the helm, alongside long term writing partner Derek Kelly, Fin Wilson and young Maestro David Scobie. The Filthy Tongues are perhaps one of Edinburgh’s best kept of secrets, and in previous incarnations secured no fewer than eight Major Label top 100’s in the UK at a time when that actually mean’t something.

Cabaret Voltaire in Edinburgh was at near capacity on the 5th of December, 2015, and shortly before they were due to take the stage, the audience were slightly pensive in anticipation. When they nonchalantly sauntered onstage juxtaposed in black ties, black-suits and black boots, it was like a scene from the Good The Bad and the ugly. Metcalfe donned a wide brimmed Pilgrim hat, perhaps a prop from an old John Carpenter horror, and looking terribly Tarantino-esque with a silver fob watch hanging from a chain at his waist. That dastardly old Devil is after all in the detail.

Initially, it seemed the top end had fell out of the guitar sound, but was quickly recovered. Glancing askew, a wry smile crossed the coupon of the boy next to me. Don’t you love it when Artists make the effort? The only thing missing was the tumbleweed blowing about stage left in the cavernous recesses of this recently renovated old Edinburgh haunt; and speaking of haunts, was that the ghost of Hugo Ball mingling in our midst?

There was tacit knowledge lurking in the consciousness of the throng that the Filthy Tongues were showcasing brand new material from a forthcoming album, and having previewed four of the tracks already, relished the thought that herein was a band representing the dark, macabre side of life on the underbelly of Auld Reekie! New material embraces subject matter close to thine own beating heart, thine own Edgar Allen Poe inclinations. and thine own Burke & Hare type hardships!

Metcalfe & Kelly’s world and narrative hover’s in a thin space between the seediest shooting galleries of Leith, a Frosty Jack imbibing alcoholic millieu around Edinburgh’s Hunter Square, the Wild West of Billy the Kid, and a new spiritual terrain punctuated by the words Drug Free emblazoned in white across the back of his belt …!

We’re all Children of the Filthy and Jacob’s Ladder, penned in its entirety by Derek Kelly, is the first of the new compositions and has a hauntingly ethereal chorus: ‘Hallelujah – from the top of the hill’, and evokes thoughts of the veil ripping in the temple as Christ expires on his bloody cross, his soul descending into hell, but with a foreknowledge in the minds of the bystanders there on Calvary – victory has been won (perhaps over Metcalfe’s own addiction), and the best is yet to come!

Holy Brothers is new and Dust is an older Mac Kenzies number, while Long Time Dead, another of the new compositions is nothing short of a Masterpiece and to compare it to Nick Cave & The Bad Seeds would be an unfair comment to make. Metcalfe & Kelly are writing from there own emotional bedrock, and the authenticity embedded in these lyrics would stagger a corpse:

‘Here comes Danny rolling in, smelling like a sewer. a conquistador on wheels, he trundles to the bar, he lost his leg injecting, but he had a lot of fun, he spent a fortune on the first and now he’s working on the other one!

What can one say to that? There’s a gritty realism that stands alongside any of Irvine Welsh’s narrative, Pete Doherty’s compositions on Anthem of Doomed Youth or Jim Carrol’s People who Died

Next came Suffocate Me the dark and sultry single that Angelfish released on MTV, capturing the attention of Steve Marker, Duke Erickson & Butch Vig, and setting in motion the beginning of a process that would see Shirley Manson depart Angelfish for Super Stardom in GARBAGE, and sadly removing an active ingredient that would have rendered Angelfish Scotland’s most iconic Post Punk, New Wave band ever! Perhaps not as sultry as when Shirley sang it, its a crowd-pleaser nevertheless.

Bowhead Saint is a highlight of the set, performed with gusto and panache, its a song about a sixteenth century Holy Wully, covenanter and hypocrite noted for his fiery, spirited style of preaching and denouncement of all things hedonistic and carnal while banging the arse off of all and sundry on the QT. Performing art that neglects the dark side is neither real nor does it reflect the reality of human nature. It lends itself so well to the overall aesthetic of the band.

Goodwill City, is from Mac Kenzie era, and harkens back to a time when Edinburgh was noted for the HIV/AIDS epidemic and became a Goodwill City but for members of Thatcher’s backbench calling for AIDS sufferers being isolated and exiled on an oil rig! Not much has changed really!
Trash It is a nihilistic Angelfish song referring to a posed question about what to do with a random bag of speed, and the answer: Trash It! Similarly, ‘Mummy Can’t Drive’ is a bout a trip to a Prince concert in Glasgow when said mother retorts to her child while coming up on MDMA: ‘Mummy Can’t Drive’. Green Turns to Red, is a Mac Kenzie’s song about the Hungerford massacre of 1988, while Blacker than Black adds to the sonic chiaroscuro, with a subtext dealing with adrenaline junkies, and connecting warfare/battlefield scenarios to an addictive process.

The evening is finished with Port of Amsterdam, a cover of Belgian, Jaques Brel but also notably the B Side of David Bowie’s, Sorrow. The Filthy Tongues have made it their own and it finishes off a set has everyone chattering, including the author, contemplating that 2016 may likely see a long awaited Magnum Opus of an album from this under rated gem that is coursing along in Scotland’s capitol. Watch this space for what will be a powerful new album in 2016: The Gig: Nine out of Ten!

All words by Harry Mulligan, whose Louder Than War author’s archive is here.