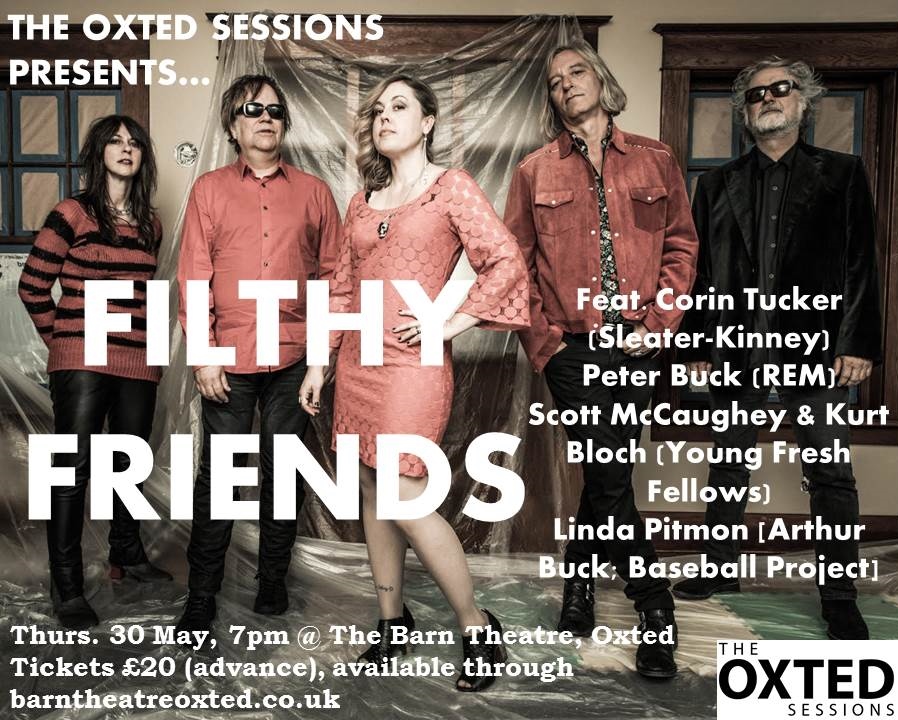 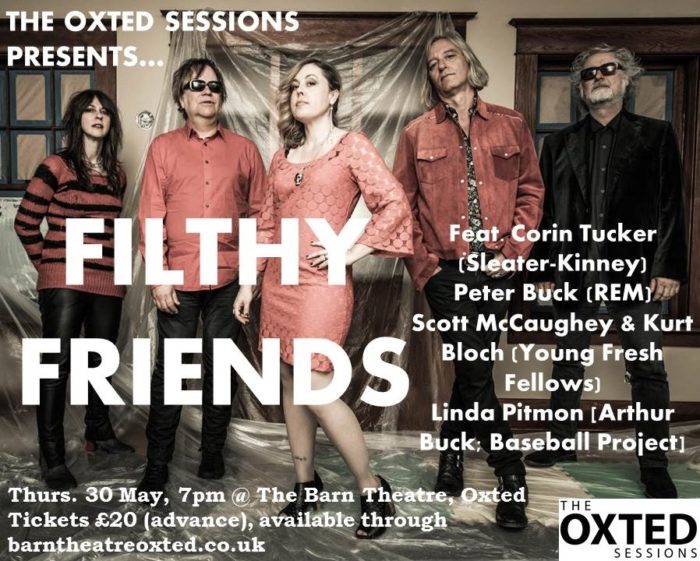 The Oxted Sessions are delighted to announce that Filthy Friends will be visiting for an intimate gig at the beautiful Barn Theatre on Thursday 30th May.

You may not have heard of Filthy Friends, but their members have spent the past forty years re-shaping the landscape of American rock music. The creation of Corin Tucker (co-founder of the hugely influential Sleater-Kinney) and Peter Buck (R.E.M. guitarist, Rock and Roll Hall of Fame inductee) Filthy Friends are a force to be reckoned with.

The first release from Filthy Friends, filled with scorchingly melodic rock, came as a small, delightful shock to the system. Tucker and Buck teamed up with indie stalwarts Scott McCaughey and Kurt Bloch to create a crackling melodic whole on debut album Invitation (released 2017)

Now, with their follow-up—Emerald Valley, out on Kill Rock Stars on May 3rd—the Friends have proven their collective mettle, crafting a thematic suite of songs that finds the quintet digging deeper into their bag of musical tricks, and giving Tucker room to rage about and mourn the fate of our planet and the people who inhabit it.

The core idea came from a demo Buck shared with Tucker for a grinding blues song that eventually turned into this new album’s title track. The minute she heard it, Tucker says, it sparked something within her: “I had this long poem growing in my brain,” she says. “It turned into a sort of manifesto about the kind of place we are at as a country, but also as a region. Just taking stock of where we’re at and feeling like I can’t believe we let things get this bad.”

From there, the Friends address growing concerns over oil production and distribution (“Pipeline”), gentrification and income inequality within the band’s hometown of Portland, Oregon (“One Flew East”), and taking on the voice of the desperate souls that are getting crushed under the wheels of capitalism (“Last Chance County”). The band paints these themes with many different shades of the rock palette, nestling a snapping punk tune between a bit of jangly pop and an almost-shoegaze ballad, with stops along the way for songs that burn as hot and move as slow as lava, and tunes that stay steady and fast as a rocket launch.

Emerald Valley is also a testament to the indefatigable spirit of the Filthy Friends themselves. Scott McCaughey bounced back from a stroke he suffered in late 2017, which curtailed the band’s tour plans, and is playing with more fire than ever; while the band were also able to bring a new member into the fold, with drummer Linda Pitmon coming on board to replace Bill Rieflin, without an ounce of power lost.

We could all take a lesson from Filthy Friends. As proven by Emerald Valley, when a group of like-minded people gather their individual strengths together, and point them toward a singular goal, there’s no telling how powerful they can become and what an impact they can make on the world at large.

Filthy Friends visit The Barn Theatre, Oxted, to play a very special Oxted Session, on Thursday 30th May, as part of a European tour.

Tickets will go on sale on Friday 1st March at 12pm, priced at £20 in advance, £25 on the door, and are available through the Barn website – barntheatreoxted.co.uk.