Home Film Whiplash – film review. Brilliant film about a drummer, his mentor and... 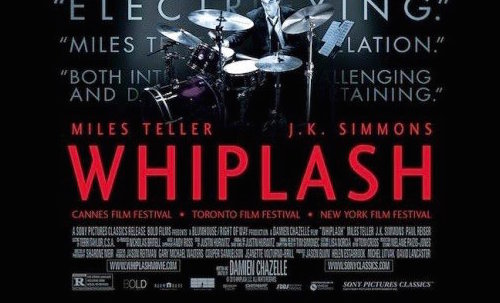 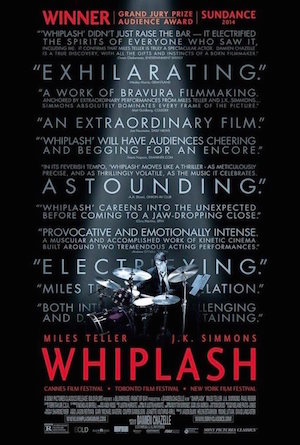 Hotly tipped in this year’s award season, Whiplash is the taut drama about a talented young drummer, his mentor and how far someone should be pushed in pursuit of maximising their abilities.

A black screen. We hear the sound of drums that speed up and keep speeding up. Now we see Andrew Neiman, a promising young student at a prestigious New York music school, who is absolutely determined to fulfil his potential. He stops, makes a small adjustment to his kit and then starts practising another routine.

He’s lost in concentration as he plays, at least until he realises he’s being watched by a muscular, bald man in his late 50s with an air of supreme authority. This is Terence Fletcher, the musical director of the college jazz orchestra and the man best placed to help Andrew nurture his potential.

Fletcher asks him to play some double time swing and Andrew launches into the task and quickly loses himself once more in concentration. That is until the door is slammed shut and Fletcher gone.

Whiplash is a simple but surprisingly propulsive drama about these two characters.

You know all those films about inspiring teachers that students grow to love?

Well, this isn’t one of them. This is the story of their toxic relationship and it’s much closer in feel to the first half of Full Metal Jacket than Fame.

Fletcher is quickly shown to be an expert in mind games and other forms of manipulation and he also clearly possesses a sadistic streak, the kind of man that would think Alex Ferguson never took his hair-dryer treatment techniques far enough in the Old Trafford dressing room. Instead of hair-dryers though, Fletcher uses metal chairs, or drums, or music stands, or whatever else happens to be in his immediate vicinity.

He’s even pretty threatening when he tells students that their playing is, “not quite my tempo” but when he starts unleashing a stream of homophobic insults or slaps a student in time to the beat he can become truly terrifying.

In his favour though is the fact that he does firmly believe that his methods are the most effective way to bring out the very best in his students and maybe even give the world a new Charlie Parker. Indeed, his favourite anecdote concerns the teenage Parker, who, while jamming with Jo Jones one night, made a mistake so glaring that the drummer hurled a cymbal at his head. An ignominy, according to Fletcher, that had the effect of convincing Parker to obsessively practice and ultimately become Bird, the jazz legend.

Andrew is more than happy to go along with Fletcher’s approach and if asked by him to jump, you imagine him inevitably asking: “How high?”

He’s both insecure and yet fiercely ambitious too. He doesn’t just want to be a fantastic sticksman, he wants to become a twenty first century Buddy Rich. During a fraught dinner for family and friends, we see that he could do with some brushing up on his social skills and witness his arrogance too. And I bet Louder Than War readers will cringe at the quote on his bedroom wall: If you don’t have the ability, you wind up playing in a rock band.

Every time that Fletcher pummels his psyche to the brink of breaking point, Andrew responds by pushing himself harder and, with the same ferocity, pummels his snares, tom-toms, cymbals and bass drum. Even when Simmons makes him bleed. Literally.

In fact, the best line in Whiplash might just be when in the wake of a tortuous, endurance testing drumathon to find the best candidate for the orchestra, Fletcher calmly instructs the losing musicians to, “Clean the blood off my drum set.”

Miles Teller is a completely new actor for me while J.K. Simmons is a face I half recognised but couldn’t quite place.

Both give the kind of performance that makes me want to check out as much of their previous work now as I can find.

Yes, the film did hit a very occasional bum note and, bearing in mind Fletcher’s keen regard for his own reputation, I wasn’t entirely convinced by one of his actions towards the end. That aside, even if, like me, you’re allergic to jazz and your idea of a great drummer is Moe Tucker or Reni, then you’ll still find much to admire here.

Along with the stand-out performances (and J.K. Simmons deserves his Golden Globe win and Oscar nomination) there’s a tight script, some thrilling editing and very assured camera work throughout.

It may only be January but I do fully expect Whiplash to be one of the best ten films I see during 2015.

You can find the film on IMDB here. It’s also on Facebook.

All words by Jamie Havlin. More from Jamie can be found at his Louder Than War Author Archive.