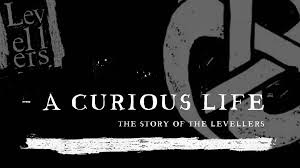 There are so many great tales to be told in rock n roll and so many of them are getting told in an avalanche of documentaries and books but few can be as endearing and plane off the wall as the Levellers story.

Ostensibly a folk punk band or a punk folk band who managed to smash and grab a whole bunch of gold albums and become quietly massive when the music media was looking the other way, the Levellers seem like a well oiled machine who had a plan.

It turns out they were certainly well oiled but more in the alcoholic sense as a disparate, desperate and dysfunctional group of characters somehow fell together and bumbled into the big time with a series of brilliantly melodic songs that defied consensus and fashion and struck a raw nerve with a rebellious period when the last strands of the punk rock generation had one more desperate go to overthrow the establishment with merrie making and song.

Director Dunstan Bruce was perfectly placed to make this film having been one of the key players in Chumbawumba- a fellow anarchist leaning punk band with a twist who took their cues from Crass before setting out on their own quirky quark of a journey. He could have made a straight rags to riches tale but thankfully has reflected the band in all their heart warming madness.

This is no normal band.

Things, though, are far more endearing and off the wall in Lev-world. If you are expecting the usual rock sludge of idiotic clomping around then you will be bounced a swift curveball in the first scene when Levellers bass player Jeremy Cunningham goes home, fumbles with his front door keys and is caught feeding two seagulls in his back garden which quickly set the mood.

Jeremy accidentally dominates the film with his eccentricity and loveable, obsessional behaviour. The camera follows him around as he shows a huge history book collection which he lovingly cackles over, pawing over the creaking shelves of ancient dusty tomes before explaining his paintings after climbing through a smashed door in the bowels of the band’s Metway studios.

Everywhere the camera turns he seems to be there, the key cog in a band of odd bod cogs, there he is relating how he met singer Mark Chadwick whilst trying to cop off with his then girlfriend ‘but ended up with him instead’. He attempts to explain the band’s working methods and ends up as confused as the rest of the group when the collective’s own inner machinations are exposed. Putting the fun into dysfunctional he seems like the the most unlikely driving force in a band brimming with talent from its inner core songwriters to Mark’s magnetic rasp of a vocal. There are no passengers in the group and they glow when talking of each other’s talents

This is a brilliant and heart warming film about a group who were born out of the white heat of punk politics and tempered this with an English Civil War of folk. They never compromised. They just carried on from the squats to the arenas. They were the key festival band of the late eighties, they had a run in with Michael Eavis as Glastonbury went from counter culture to multi media and documented the rise and fall of the free festival circuit with an astute intelligence and songwriting nous. This made them some of the truest documenters of their era- a keen eye that was ignored by the music press which had its own selfish agenda at the time.

Dunstan Bruce perfectly captures the mayhem of the band and their surrounding culture, his warm documentary style is perfect for telling the complex stories and he is as good at capturing the innocence and romantic heart and soul of Jeremy or the heartbreak of his hard drug years as well as brilliant clips of the his parents who glow with a blushing pride for their son.

If there is a better rock film made this year I want to see it as this perfectly captures the insanity of idealism and the community spirit of a band that really is a family that extends beyond the rehearsal room and all over the world.