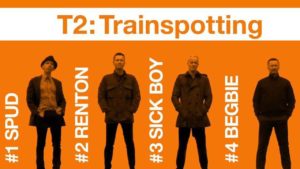 If you’ve missed the press around the release of this, you must have been in suspended animation. Joe Whyte chooses life and reviews for LTW.

Twenty years after the original generation-defining film, Trainspotting 2 returns with a fairly lengthy revisit to our anti-heroes on their being reunited through circumstance in the crumbling pubs of Leith and the cobbled, Victorian architectural grandeur of Edinburgh.

I’m sure every LTW reader is familiar with the original movie; its zeitgeist-catching appearance 20 years ago was an arrow of quicksilver through the heart of not just the Scottish film industry, but the wider world; Hollywood stood up and took notice, too. That movie’s pacey, rip-roaring trip through the dank underbelly of Edinburgh’s junkie scene was an immediate hit with the Britpop-era it (accidentally) targeted even if it was, in reality, little like Irvine Welsh’s filth-encrusted, desperation-bleeding novel. Many people at the time pointed out that few real supposedly-scheme drug users were as articulate as the protagonists of Trainspotting nor did they look like they’d sprawled from the pages of a GAP or American Apparel advertising catalogue. Begbie aside, the cast of the first movie were probably as far removed from the dangerous streets of Craigmillar or Pilton as to be extremely unlikely. Of course, its fiction; it’s not a documentary. It’s entertainment, albeit blood-spattered, syringe-plunging, infant-death and betrayal entertainment. And people loved it.

It’s been dissected, reviewed and pored over to its bare bones; I recently read an article that posited Renton’s “It’s shite being Scottish” soliloquy in that Highland wilderness train station as being partly attributable to the later push for Scottish public awareness in the run-up to the IndyRef.

Pretty tenuous if you ask me, but still, it shows the mark which that movie made and why, even now, Trainspotting remains such a touchstone. Not forgetting, of course, that soundtrack. There can surely be few people that were in their twenties in 1996 that don’t own that CD. It was utterly crucial. It featured many of the then cutting edge stars of underground (and not-so-underground) music and sold by the bucket-load. It was part of the accidental genius of Trainspotting; the music, the electric energy of the script and that where-the-fuck-did-that-come-from advertising campaign that remains one of the most iconic and copied movie posters of all time.

This aside, of course, Trainspotting was a resounding success on the screen. Few movies have grabbed the pulse of a generation before or since quite like Danny Boyle’s masterpiece and of course, director, screen writer and the young cast of virtual unknowns were catapulted into the stratosphere. Given the tensions between Boyle and Ewan McGregor in later years (apparently over the casting in The Beach) it’s probably more miraculous that this sequel was made than the characters actually surviving 20-odd years. Much of the commentary from film buffs and fans in the run-up to the sequel have basically been anxieties over whether it could live up to the hype and not taint the beloved memory of the original movie.

Rest easy. Those anxieties are unfounded. The movie (I’m not sure where they got that “T2” in the title; a nod, perhaps, to the second Terminator movie which was similarly anticipated and agonised over?) is a fitting legacy and is again testament to the talent of Boyle, script writer John Hodge and their team.

Given the end of the first film, it’s perhaps understandable that the themes of revenge and betrayal loom large across the new movie; the other striking themes are loss, redemption and the understanding that age catches up with us all. Renton returns from Amsterdam, where he’s spent the last 20 years, as his mother has passed. An emotional and typically stiff male Scottish bonding between himself and his father (James Cosmo) sees one of many nods to the original movie when he enters his unchanged childhood bedroom and puts on Iggy’s “Lust For Life” album and snaps it off just as the first beat of the title track hits. I’m not sure if I’m mistaken, but the holdall that Renton carries in several scenes may in fact be the heist bag from the first movie. There’s a wee nod to the influence of David Bowie on the characters, too, as Renton flicks through his pile of records, stopping wistfully at the Bowie ones.

Lets get this straight; T2 is fairly slow at points; the snappy, whiz-bang of the original, as well as those freeze-frame moments that have became a Brit-flick standard is also there at times before you get the idea that this falls at all flat. Perhaps, reflectively of the ages and attitudes of the characters, the main action is often a little ponderous; a scene where Begbie chases Renton through a multi-storey car park is at least twice as long as it should be and its denouement where Renton reprises one of the classic scenes of the first movie seems a trifle tacked on.

By the same token, one of the stars of the movie is Edinburgh itself. The ghostly cobbled alleys and garish nightlife is as central to the script as the action. A lot of the joy of the movie is the revisiting locations and people we’ve met before; the Banana Flats remain a crumbling monument, the decaying streets of the old port retain a seedy glamour and Mikey Forrester (a slightly stiff Irvine Welsh) appears briefly in another nod to the past.

The girls from the first movie are a little underused; the sassy schoolgirl Diane (Kelly McDonald) is now a dowdy lawyer and I wondered, if with her star being firmly in the ascent, that the producers couldn’t afford McDonald for more than a few minutes. Spud’s estranged wife Gail is a gritty presence and there’s a sweet moment at the end with her when it becomes clear that he (Spud) is in fact actually the Irvine Welsh character from the series of novels. If you remember, in the books, Spud is the central narrator, a fact that seems to have been lost with Renton’s role in the first movie. New character Veronika (Anjela Nedyalkova) burns the screen with her pulsing sensuality and Robert Carlyle’s Begbie brings an endearing pathos to his role as a father as well as the head-butting, manic-staring psychopath of old.

As regards character development, it’s clear that these guys and gals remain rather unsavoury sorts. Despite the warmth we all probably have for their characters since way back then, they are (and remain) a bunch of thieving, back-stabbing, girlfriend-stealing, weak and easily-led addicts, be it an addiction to drugs, booze, violence (or in the all-new Renton’s case) running. That weakness and fallibility is what draws us to them; we’ve all known them or been them in the real world. Spud probably comes out best in the new film; from a suicidal, ostracised junkie at the start, to a thoughtful and hope-filled writer at the end, he draws the viewer into his world. He’s no longer the simple, knockabout comedy turn. he’s now the character that the rest satellite around.

It’s not perfect; it’s a little slow at times but then aren’t we all twenty years later? Go see it. Choose life. Choose Trainspotting.

All words by Joe Whyte. Read more from Joe Whyte in his author archive.