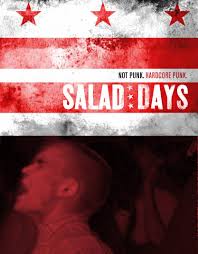 Not so much a potted history and more of a cultural snapshot, Scott Crawford’s movie ‘Salad Days’ is a tighly directed and refreshingly visual examination of the Punk Rock scene that exploded, flourished and arguably died (or at the very least evolved into something else altogether) in the US capital city throughout the 1980s.

The obvious contenders are all present in heaps – Bad Brains, Minor Threat, Fugazi, Shudder to Think and Jawbox as well as a ton of lesser known but equally key groups such as Government Issue, Void, Rites of Spring, Marginal Man and Dave Grohl’s pre-Nirvana outfit Scream.

For the most part, the movie follows the traditional format of a mixture of talking heads interviews and scratchy old VHS recordings of historical gigs, but it’s cut together with a pace the evokes the US Hardcore music it documents – and with a twist – director Scott is himself an interviewee – when the US hardcore scene exploded kicking and screaming on to the scene, Crawford was a twelve year old fresh faced boy who found himself at the epicentre, attending as many all-ages shows as he could, writing fanzines, taking photographs, interviewing bands and absorbing the music.
Interestingly (and something that had never occurred to me) the fact that DC is the centre of US Government is key to the evolution of the scene: a large proportion of the city’s surprisingly small (half a million) population work in or for the government.
Washington DC is the beating heart of arguably the most powerful nation this planet has known so far and as a result of this, political awareness and activism was very much at the forefront of the generation of angry teenagers that created the DC hardcore scene. Many of the bands were born out of disaffected youth wanting to make a statement or bring political issues to the attention of their peers during the incredibly turbulent years of the Reagan administration.

If you didn’t know – the DC Hardcore scene didn’t just make a racket – they made a racket about everything from capitalism to vivisection, women’s rights to racism, unemployment to government corrpution – you name it, these switched on kids wanted to tell the world they were angry about.
Even when the songs weren’t about politics, political awareness percolated throughout how the scene functioned whether it be Dischord Record’s intent to keep the retail price of their records to level anyone could afford, giving us the world’s first all black punk band (Bad Brains), or making as many shows open to all ages.

The latter practice being responsible for the offshoot genre/movement of Straight Edge – a scene where kids were proud to not take drugs or drink alcohol like the rest of their high school peers. In order to make sure that no under age drinking took place in venues that served alcohol, anyone under 21 had the backs of their hands marked with a simple marker penned ‘X’ so that the bar staff knew who they could and couldn’t serve. This black X became a symbol of pride amongst young punk rockers into the DC scene – it made a statement – Punk Rock in DC was all about the music, they didn’t need booze and pills to have a good time.

Of course Minor Threat/Fugazi front man, Dischord founder and all round nice guy Ian MacKaye features heavily in the interview clips along with other ‘big guns’ that will hopefully ‘sell’ the movie – Dave Grohl, Henry Rollins etc, but because Crawford himself was integral to the scene we get considerably more depth than usual, as there’s plenty of input from the ‘little guys’ – promoters, fanzine writers, sound engineers and plain old joe average gig goers all get to tell their stories. This really helps the viewer get a really well rounded immersion into what was a very unique and influential culture that eventually paved the way for the flourishing world dominance of early 1990s American alternative rock. You could argue that without DC hardcore, there might not have been the likes of Nirvana, Sonic Youth or Dinosaur Junior. In fact J Mascis and Thurston Moore show up at several points throughout to help illustrate this point eloquently. I was also pleasantly surprised that the film has a section dedicated to it’s sister DIY black music movement, ‘Go-Go’. Bands like Trouble Funk and Def Jam’s Junkyard Band often appearing on the same bill as these predominantly ‘white boys-and-girls-guitar’ bands.

In a summary, it’s a fascinating, well paced, stylish film which leaves no stone unturned that is a must see if you have any interest in the origins of alternative guitar music from the US. Although screenings in the UK are sadly limited to a few arthouse cinemas, the DVD is due for release in September. If I’ve whetted your appetite, the trailer and more info can be found on-line here:https://saladdaysdc.com/