Home Music Bands Fields Of The Nephilim, The Men That Will Not Be Blamed For... 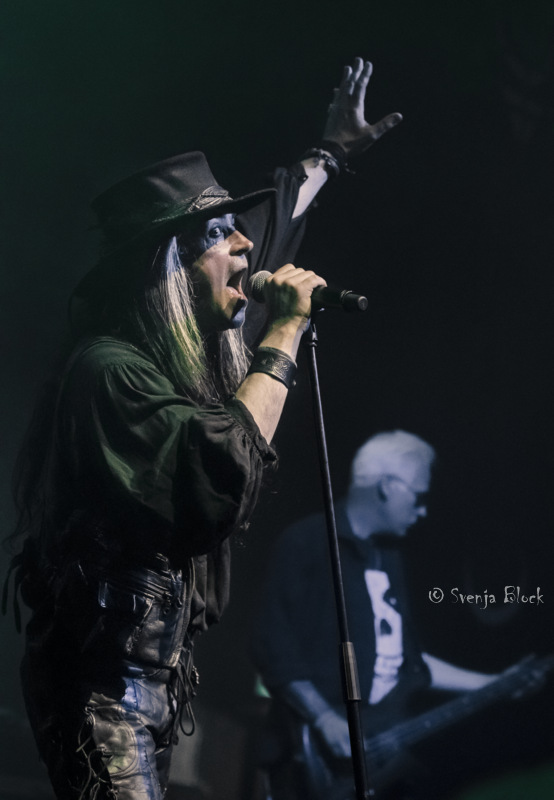 North London gets a dose of gothic cinematic rock from Carl McCoy’s Fields Of The Nephilim, with support from manic steampunks The Men That Will Not Be Blamed For Nothing. Review by Anne Johanna. Photos by Svenja Block.

A whopping 29 years since the excellent 1987 debut Dawnrazor and only four band-approved studio albums later, Fields Of The Nephilim are doing a special Summer Solstice show in London concentrating on their third album Elizium, released in 1990. Hailed as their best and most enthralling release by many, Pink Floyd/David Gilmour engineer Andy Jackson produced an album that was the culmination of what the two previous albums Dawnrazor and The Nephilim had given promise to – an atmospheric, film-like journey through darkness and light. Following the live album Earth Inferno in 1991 the gothic rockers went on a long hiatus with the intention to regroup when the time is right. That didn’t happen until Mourning Sun in 2005, and Elizium was the last album with the classic line-up of Carl McCoy, Tony Pettitt, Peter Yates, Paul Wright and Alexander “Nod” Wright recorded together. Widely embraced by a variety of underground cultures from goth to metal and far beyond, Nephilim have been crowned as one of the most influential bands in its genre.

The Men That Will Not Be Blamed For Nothing (TMTWNBBFN for, erm, short) are an interesting choice for support. Headed by Andy Heintz of the fun, frightening and uncategorisable Creaming Jesus (1987-1994), TMTWNBBFN only recently toured the US following Heintz’s remarkable recovery from throat cancer. The band blast through their 30 minute set with rigour and good-humoured rage. The toga clad, black metal make-up wearing Andrew O’Neill and bassist Marc Burrows are seasoned stand-up comedians in their other lives and crack a few jokes inbetween songs. Jez Miller’s job behind the drum kit certainly isn’t boring with these live wires holding the fort at the front. Their entertaining set sprouts a decent enough crowd of die-hard Nephilites halfway through although it’s still a vast contrast to the huge crowd they drew at the Download Festival the previous weekend. Musically the band veer effortlessly from something akin to industrial goth to Irish traditional drinking songs with some straightforward punk and metal thrown in. Chuck every single music genre under the Summer Solstice sun into a cement mixer via a neo-victorian anti-establishment blender and you have TMTWNBBFN. Gothic gloominess is nowhere to be seen or felt as these characters step off the stage.

Fields Of The Nephilim have promised the entire Elizium album tonight and true to their word, the intro of Dead But Dreaming brings Carl McCoy and his gang onto the dimly lit stage. For Her Light kicks things off good and proper with McCoy wearing his trademark hat and appearing to have found the elixir of agelessness. True to the album, At The Gates Of A Silent Memory follows and Sumerland (What Dreams May Come) is epic. There isn’t much of a stage show going on, just heaps of dry ice and simple strobe lighting. As the venue is nowhere near full, the hoped for intense atmosphere is missing and despite the music being spot on, it’s difficult to get the full immersive experience of the whole album.

The band play the entire Elizium album in order, only omitting Submission for some unknown reason. Psychonaut gets a good reception with human towers forming, and the doomish Mourning Sun from 2005 sounds as impressive as on record and closes the main set. There are encores in store though and Prophecy, the first Nephilim track in more than a decade released in March of this year, is a surprisingly standard rocker and sticks out from the rest of the set list. Despite mixed reception from fans, it does not lessen the expectations from a new Nephilim album, after all it is a long, long time coming. McCoy has always been an advocate for personal evolution and doing things when the time is right. It’s the respect for allowing the creative process to unfold naturally, no matter how slowly, that keeps the intrigue going around the man. As always, it’s the old anthems such as the stunning Moonchild, the soaring Dawnrazor and the shamanic Last Exit For The Lost that get the biggest cheers of the night, with the faithfuls revelling in their rapturous bliss.

Whereas the two albums preceding Elizium are classic goth albums in their own right, Elizium is an altogether more ritualistic voyage relying on a changing atmosphere whilst moving along with fluid ease. There is the sublime single For Her Light which is most reminiscent of the first album, whereas the album as a whole is a creation of an all-round experience. As for this evening it’s all fair and square to intend for the music to do the talking, but in this instance the cinematic quality of Elizium was slightly lost in the pared-down show in the hollow hall of the Forum. McCoy’s individualistic take on all things esoteric is omnipresent but the experience tonight wasn’t quite as intense as hoped. Although their musical releases are few and far between these days, there’s no doubt that Fields Of The Nephilim will keep moving through the hazy mists of time for as long as Carl McCoy’s vision is alive.

Fields of the Nephilim will perform a Winter Solstice show at the Shepherd’s Bush Empire, London on 21 December 2016.

Fields of the Nephilim can be found online here: fields-of-the-nephilim.com. They’re also on Facebook.