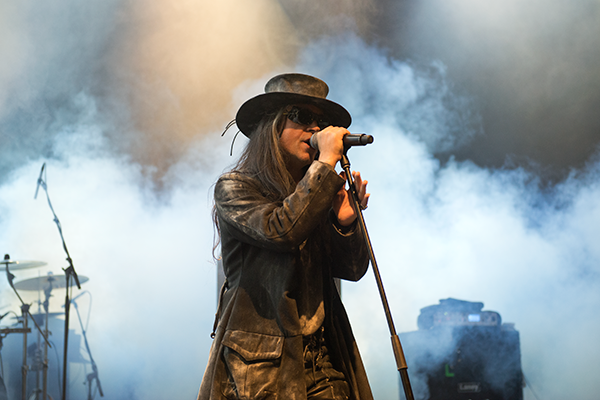 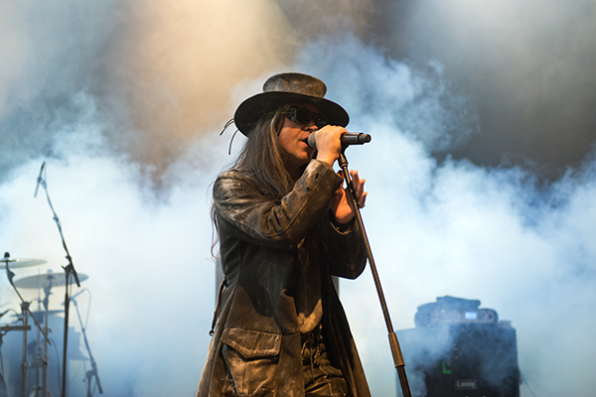 Fields of the Nephilim photo © Tess Donohoe as are all others on this page.

Fields of the Nephilim, HIM, Dolomite Minor

Last weekend Fields of the Nephilim celebrated their 30th anniversary with a brace of live shows at Shepherds Bush Empire. We were told that there was a very good chance new material will be debuted, so a memorable performance was duly anticipated. We sent Nick Holmes (words) and Tess Donohoe (photos) along to check out one of the shows see how the night panned out below.

On a gloriously sunny but chilly Saturday in December a noticeable number of darkly dressed people congregated around Shepherds Bush Green in London. The pubs were already filled with Queens Park Rangers fans sinking a few pints before heading along to the match and a few raised eyebrows at the assortment of outfits in a variety of colours, black and black. Thankfully there was no air of antagonism as the soccer crowd moved on, no goths versus soccer problems. Despite stereotypes these particular goths were in full-on party mood to mark the 30th anniversary of a hugely important band in their lives as well as the history of rock and metal music. Some had travelled from as far as Denmark, Italy, Canada and even Australia. Musical comrades also turned out to pay tribute including The Mission’s frontman Wayne Hussey, who lives in Brazil. Such is the call of Fields of the Nephilim. 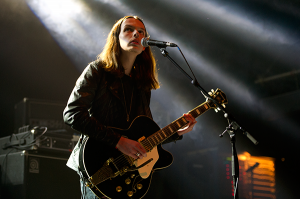 Dolomite Minor (see photo right) are a duo of young lads from Southampton. It is unlikely they were born when special guests HIM formed in 1991 let alone when Nephilim began. Before nostalgia would take over later it was good to see Max (drums) and Joe (vocals, guitar) receive a warm reaction from the crowd, some of whom would have also attended the previous night’s show. The pair evoke the sound of Black Sabbath with vocals akin to youthful, stoned Iggy Pop, maybe a bit of Black Rebel Motorcycle Club in there too. The set was short and sweet with Max getting up and parading around his kit while Joe came across as rather shy. They have played at Glastonbury, are already booked for Denmark’s Roskilde festival next year and they must have won some new admirers here. They should have a bright future ahead of them.

There was a time when Ville Valo of HIM was rarely off the cover of Kerrang! magazine as the pin-up boy of goth rock. Though a few years older it was clear that he is still that for some. An ear-splitting female chorus screamed as he took to the stage, possibly deafening cats in surrounding boroughs. Valo’s friendship with Carl McCoy was cemented when the long-time FOTN fan brought them to his Helldone New Year event in Helsinki back in 2007. It was only the second gig after a period of musical hiatus for McCoy. That night the Finnish frontman was one of the most eager in the audience at the legendary and intimate Tavastia club. Normally HIM would sell out the likes of the Empire in their own right, but there were obviously no second thoughts about McCoy’s invitation. The mood onstage was one of excitement and peppered with silliness. Valo, who often stays fairly static at the mic, put the stand aside and let himself go. His voice was stronger than it’s sounded in a long time as he danced his way through a best of HIM set including bittersweet opener “The Sacrament” plus fan favourites “Buried Alive By Love”, “Funeral of Hearts” and “Razorblade Kiss”. Some kind of in-joke was clearly at work as he constantly sparred with bassist Mige and the two appeared to tease drummer Gas, hard at work behind a sound screen. By closer “When Love And Death Embrace” the ladies had screamed themselves hoarse and the atmosphere in the characterful old theatre was one of feverish anticipation. 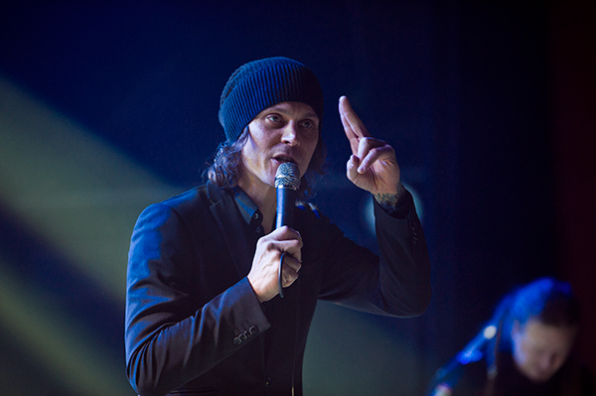 Photo above: Ville Valo of HIM by Tess Donohoe

When the lights went out and smoke filled the air the stage was set for a grand entrance. There they were, shadowy figures emerging from the mist as a vocal aria washed over the venue. But wait a minute, one was missing. Then a sonic boom Hans Zimmer would be proud of. As the tension of “Shroud (Exordium)” built to its crescendo the unmistakeable bass level growl of Carl McCoy echoed around the walls. The sound of shattering glass and a further boom heralded the arrival of the frontman, welcomed by the audience like a returning hero. Without speaking a word to them he threw himself into “Straight To The Light” and the place went apeshit. Playing a very different set from the first night, FOTN powered through a series of classics including “Preacher Man”, “The Watchman”, “Dawnrazor” and “Moonchild”. All were played with devastating precision, and the return of original bass player, Tony Pettit, added extra weight to the earthshaking sound. 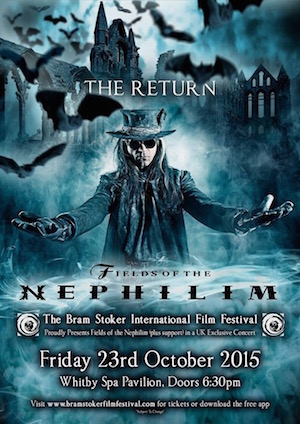 As heavily rumoured this wasn’t just about past glories. The first new material since 2005’s “Mourning Sun” album was revealed. McCoy left the stage as the band, including a spookily hoodied guitarist, played what sounded a bit like “Pretty Hate Machine”-era Nine Inch Nails. Kind of a gothic rock disco number. When he returned something had clicked. At most gigs McCoy tends to stroll about in a slow, deliberate manner. Maybe a few Red Bulls during the brief break or simply the atmosphere had affected him. He picked up the mic stand and rocked out, to the obvious delight of the audience and himself. The new song has a definite hard rock vibe and it was a tantalising tease of what may be coming next year. During main set closer “Last Exit For The Lost” and encore starter “Psychonaut” singer became conductor, standing at the edge of the stage and waving his arms to encourage the 2,000-strong choir to join in. Grown men clambered over each other to wave and gesture at their leader. The last song of the night, “Mourning Sun”, was like a statement of intent. McCoy roared “I’m alive again! I will rise again! We will rise again!” The effect was mesmerising.

After the 2007 comeback, the “Ceremonies” concerts of the following year and last year’s “Revelations” shows these latest gigs were definitely celebrations. Some parts of the next chapter have already been revealed, with FOTN confirmed to play two headline sets at Roadburn Festival next spring at the invitation of Wardruna and Enslaved. They will also return to Bram Stoker Film Festival in October (see poster above). There are rumblings suggesting more new music and a further series of special concerts next year. Exciting times in the land of gothic giants.

Look out for an exclusive interview with Carl McCoy and Tony Pettit coming soon!

All words by Nick Holmes and all the photos © Tess Donohoe. More writing by Nick on Louder Than War can be found at his author’s archive and more photo’s by Tess can be found either here or at her website: tessdonohoe.com. Finally, Nick tweets as @oldenick666 and Tess as @tess_donohoe.