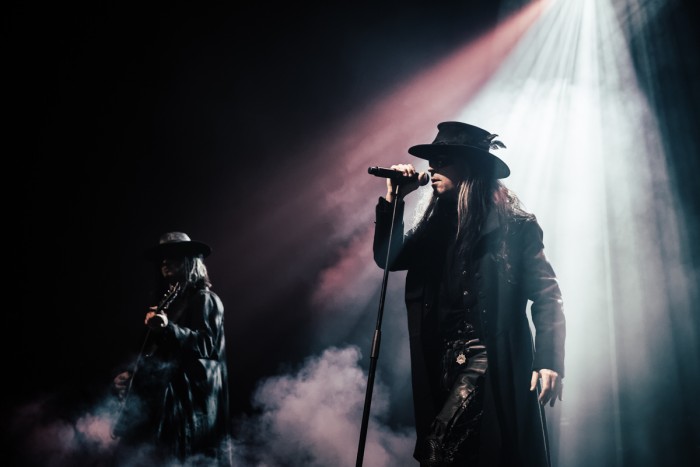 Fields of the Nephilim

Fields of the Nephilim rode into Kentish Town last week for their annual pre-Christmas gathering. Paul Grace was there to witness the five men of the Apocalypse deliver a seriously cool yule showdown.

I first saw Fields Of The Nephilim at the Reading Rock Festival in 1987. The sun was setting, the stage full of dry ice, and the band covered head to toe in flour (it was meant to give a weather-beaten appearance, like dusty characters from a spaghetti western). The unconvinced members of the audience took great delight in throwing bottles of piss at them. I, however, remained convinced.

Fields of the Nephilim have since been through many incarnations – they’ve lost members, gained members, taken extended leaves of absence, and today, just two of the original band members remain – bassist Tony Pettit and vocalist Carl McCoy.

Music releases are sadly few and far between these days, however, their pre-Christmas London shows have now become something of an annual tradition in the Nephilim’s calendar. This year, we’re treated to two shows – an intimate gig at Islington’s O2 Academy, followed by a second larger show, which was originally due to take place at the O2 Shepherd’s Bush Empire, but was postponed and relocated to the O2 Forum Kentish Town due to structural issues at the Empire.

Coincidentally, the Forum has historical significance for Fields of the Nephilim, as it was here that their critically acclaimed 1988 live video, “Forever Remain”, was recorded.

Despite the date and venue change, there is a very good turnout tonight, and the Forum is a sea of black clothes, spiky hair and of course, the occasional fan covered in flour.

At 8:45pm the lights are dimmed, the stage fills with their signature dry ice, and the guitarists and drummer emerge. The spooky scene is set and the Forum seems to tremble in tense expectation.

Fields of the Nephilim initially tease us with the macabre instrumental textures of “24th Moment”, after which the haunting outline of vocalist Carl McCoy finally appears, like Darth Vader on the bridge of a star destroyer, and they defiantly launch into 1987 anthem “Dawnrazor”.

McCoy’s razor-blade growl immediately pierces the mist and resonates throughout the venue, the distorted and delayed guitar melodies adding to the sinister vibe – like blood dripping from a blade in a dark and cavernous catacomb. 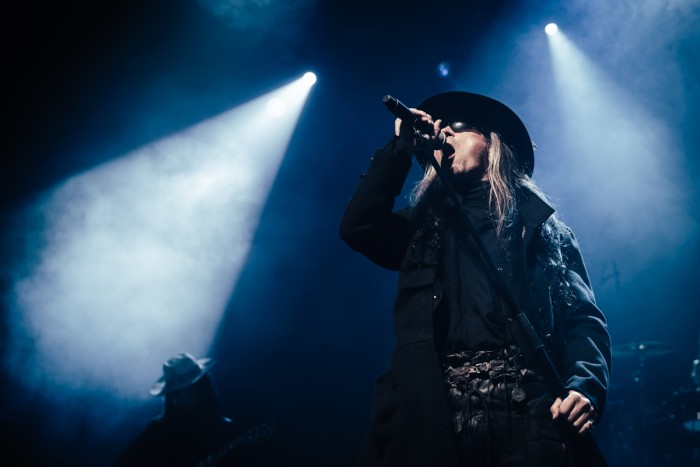 Their stage presence is simple but effective – five men in silhouette with occasional strobing, little movement and a ton of dry ice. There’s no need for fancy stage sets or tricks, the music very much speaks for itself, and we’re carried on a nostalgic journey through darkness and light.

Their biggest commercial tune, “Moonchild”, triggers a huge reaction which sees fans building human towers, sitting and standing on each other’s shoulders – a common sight at Nephilim gigs, and a reflection of the camaraderie of their dedicated following.

McCoy spends most of the first half of the show menacingly perched in his trademark stance, haunched over the mic stand, and occasionally spreading his arms out out like Jesus on the cross. Later on, he steps things up a notch, twisting the mic stand round and round, and screaming at the audience like a man possessed – which they love and respond with arms outstretched. 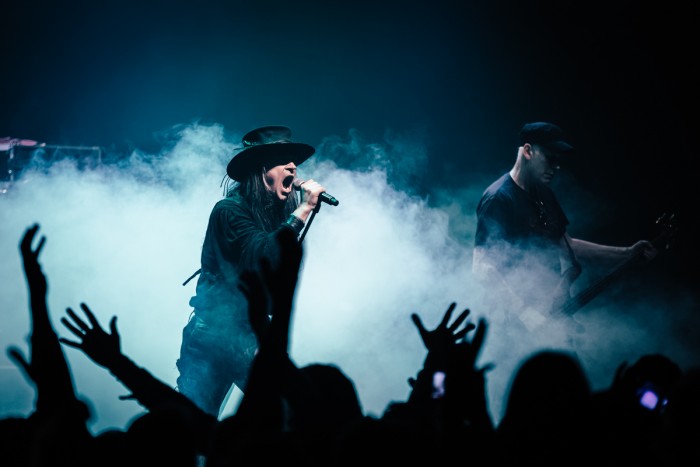 Tonight, Fields Of The Nephilim are very much on form, and full of the otherworldly character we’ve come to recognise them for. “Love Under Will”, “Vet For The Insane” and “Mourning Sun”, to name but a few, are all delivered with precision and drive. It’s not all about the classics though – we’re given two unreleased tracks which perhaps suggests a new release for 2016.

For the first encore, the familiar chords of “Psychonaut” are played under frenzied strobing, and underpinned by organic tribal percussion, rolling bass lines, and McCoy’s dark, pagan chanting. The effect is both intense and impressive.

They end appropriately with “Last Exit For The Lost” – a 10 minute epic journey, starting slow and low, but finishing (very) high and mighty.

A truly awesome and confident show – I only hope that we don’t have to wait until next Christmas to experience it all again.

You can find Fields of the Nephilim online here: fieldsofthenephilim.com. They’re also on Facebook and twitter as @FOTNofficial.