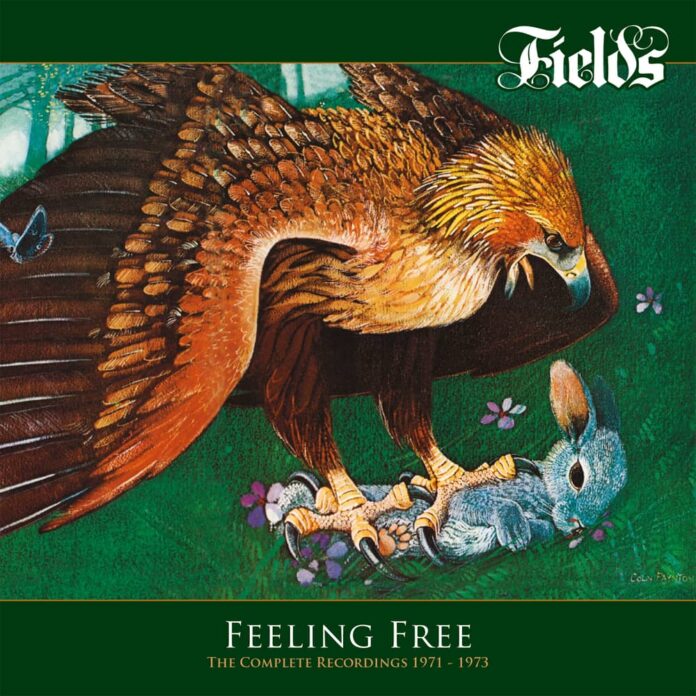 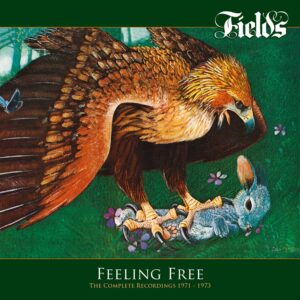 All the surviving recordings from 1971 to 1973 by progressive trio Fields, a band headed up by keyboard maestro Graham Field, late of the better-known outfit Rare Bird. This includes Fields’ self-titled album released by CBS Records and the unissued until 2015 follow up Contrasts. Ian Canty remembers when it was all fields around here…

In 1971 keyboardist and founder member Graham Field left the successful prog rock act Rare Bird. The reason behind this was mainly because of the financial repercussions of the contract they were signed to. He earned only £140 in a year and that was despite the band scoring a UK hit with the Sympathy single, his own tune. To add insult to injury, the statement he was sent didn’t even include a cheque for the paltry amount, so he unsurprisingly took the decision to move on rather than bankrupt himself. The favourable track record of Rare Bird meant that the CBS label quickly snapped him up to supply them with three LPs.

With a record deal in place, Field sought out potential collaborators for his new venture. He consulted with his friend Robert Fripp to this end and these conversations yielded ex-King Crimson drummer Andy McCulloch. McCulloch in turn was pals with a guitarist called Alan Barry and he put him in touch with Graham. Fields asked Barry if he would be willing to mainly sing and play bass in this new aggregation because he wanted to continue the path he had set out on with Rare Bird i.e. moving away from a guitar-dominated sound. Alan, a capable vocalist, agreed and this completed the first line-up of Fields. With the personnel in place, they worked on their debut album and took in many promotional appearances to promote it, particularly in mainland Europe where the band built up a following.

Any prog-phobics will be pleased to hear that having the keyboards lead Fields makes them a surprisingly accessible proposition on their self-titled debut album from 1971. Consisting of 10 tracks that are quite concise might help as well. The LP starts with the arresting sound of the A-side from the band’s sole 45 A Friend Of Mine. Fields are powered along here by Graham’s organ and some busy percussive work. The following When The Sun Still Shines is more of a crunchy 1970s rocker, where Barry gets to cut loose on some fiery guitar licks and then Not So Good initially takes things down a notch, aided by a prominent piano line. The song itself seems to concern the suffering environment and “the use things up and throw them away” culture of the 1970s. Sadly the lyrical content is still relevant today.

Three Minstrels has a medieval folk influence in its lyrics, something that on occasion made prog a bit of a sitting duck for parodists, but Fields just about get away with it through the hyperactive drumming style employed. The gently emerging sound of instrumental Slow Susan is really nice before the rolling funk Over And Over Again has the organ zapping all over a driving rhythm, with the vocal finally arriving two minutes in. Feeling Free then comes with a pronounced blues feel to the piano intro and from there develops into an evocative slice of melodic 1970’s pop/rock.

More or less a laidback acoustic strum, Fair Haired Lady is again song focused, but isn’t one of their strongest efforts. However, all is forgotten when A Place To Lay My Head barrels in. Stepping into view with a stop start r&b strut, this gives Alan Barry the opportunity to really flesh things out with his guitar. Finally for Fields The album we have The Eagle, with the main character of the song presumably influencing the front cover design. Keyboards stab duel with guitar, before things really go down to a quasi-classical laidback atmosphere. Then, after a laidback break when you might find yourself unaccountably wanting a cigar, the band come back to life with a vengeance. Finally, we are gradually taken back down to the piano in a bit of a chaotic Les Dawson manner, before signing off sweetly.

Like everything on this first Fields album there is an economy displayed which means the showing off never goes over the top and this certainly adds to the record’s appeal for those outside of prog circles. As bonuses on this disc, we get alternate takes of the album tracks Slow Susan and A Place To Lay My Head and two numbers culled from a BBC session taped just before Christmas 1971. A Friend Of Mine gets versioned agreeably and it is joined by a non-LP item, the sunny pop nugget titled Wouldn’t You Agree.

The album was a reasonable seller and the band were popular live, but from here Fields encountered choppy waters. Firstly, Alan Barry decided to leave. Field and McCulloch assessed the options and picked ex-Supertramp bassist Frank Farrell as his replacement. Having got over that obstacle they found that CBS’ London staff, who had been receptive to Fields, were dismissed en masse. In their place were a new team from New York which showed little or no interest in what the band were doing. As a result, the label passed on the new material Fields were recording, which led directly to the band splitting up. Disc two of Feeling Free is drawn from these later sessions, which had to wait many years before the release as Contrasts on RPM in 2015.

Beginning with a police siren and battering drum attack, Let Her Sleep, Contrasts’ opening number, trades on Field’s nimble keyboards and a steady stepping bassline. Then all slows down until it practically hovers in the air. The vocal and a more insistent beat then impose, though again we soon drop off into quieter realms, before the process restarts. This is pretty much standard prog territory to start off with. But after another sound sample, the bright momentum of pop tune Wedding Bells breaks out, which finishes with a solo violin section. This then segues into the downbeat blues feel of an impressive Someone To Trust.

Wonder Why, which sports a quite danceable, funky swagger and high backing voices, comes next, with another pumping-keys prog-pop number Music Was Their Game proceeding after an excerpt of countryside noise. The delicate sound of The Old Canal is charming and attractive and a lively electric organ workout Put Out To Grass sweeps by. After another bucolic sample, we go to the last item on Contrasts Storm. Starting very quietly with duet vocals, an urgent tempo quickly asserts itself and a playful mood appears to dominate, with synths drones utilised in a pop/rock context. In summary, Contrasts perhaps doesn’t quite live up to the first album but is valuable as a more than decent recording from the time.

The final three tracks included on Feeling Free are extras featuring the second lineup of Fields. Field co-wrote Set Yourself Free with Frank Farrell and it is one of the band’s musically complicated but darn catchy outings. They were very pop for a prog band and the next effort, the simple and enchanting The River, hammers home the point. All that is left is an r&b keyboard instrumental called Spring.

Feeling Free has a fair helping of very attractive tunes and makes clear that Fields represented the more accessible wing of prog. That is a good thing. They didn’t want you to suffer for their music, something which may have occasionally been the case with a few of their contemporaries. The first LP is really impressive – it has stood the test of time well with lots to recommend about it. Contrasts is not quite as consistent, but is still a worthy enough effort. If you’re wanting to jump into prog but don’t know quite where to start, Feeling Free is a very good collection and a decent place as any to ease oneself into progressive waters.