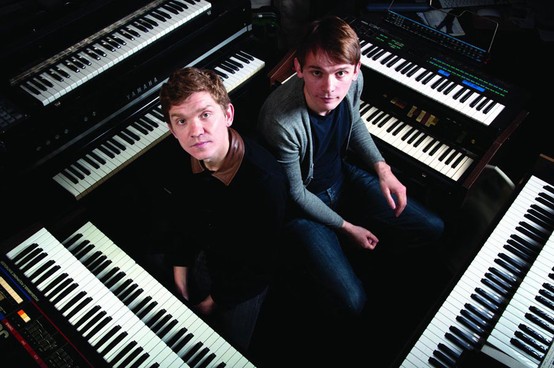 Sunderland’s fluctuating fourpiece Field Music have, individually, been floating around the “mainstream indie” (for want of a better term) scene in various guises for a while now. Their fourth album Plumb is out this week, and has been attracting widespread acclaim. Here’s what Andrew Golding thought of it.

Plumb has more ideas in its little finger than the collective creators of the 2012 hit parade put together. It took me three goes before it kicked in. With 15 tracks clocking in at 36 minutes, I initially found it a bit disconcerting and disjointed, but then I realized that I’d had my iPod on Shuffle for the first two passes. Once I managed to get the sequence correct and took a step back, the seemingly random dots suddenly formed a picture. Perfect little sandcastles, built to order then abandoned, waiting for the sea to wash them away.

A lot of thought has gone into making the album work. Thinking, as we all know, is not necessarily a good thing in rock’n’roll. Here though, everything just works. A relentless pursuit of perfectionism, Plumb is constantly moving target. I love that on ”ËœStart The Day Right’ I can hear Pet Sounds, Steve Howe, Soft Machine, Steely Dan and XTC’s ”ËœSkylarking’ kicked out of shape and skillfully built back into something else. I love the two drum kits thing on ”ËœA New Town’. ”ËœIs This The Picture?’ could have been stretched out for six or seven minutes, but is quite content to sod off after two and a half. I’d love to look at their record collections. I bet I’d find all the albums I used to have to hide when my punk rock mates came over. Nothing is overstated and nothing outstays it’s welcome. 21st Century music is supposed to be about easily digestible moments, but Plumb kicks that into touch and demands you listen to is as an album. The harmonies are lush, but used sparingly enough not to overwhelm. The arrangements are clever, but never “clever clever”.

I’m guessing that Plum might not be the everyone’s taste, but it’s bordering on genius and I, for one, love it.