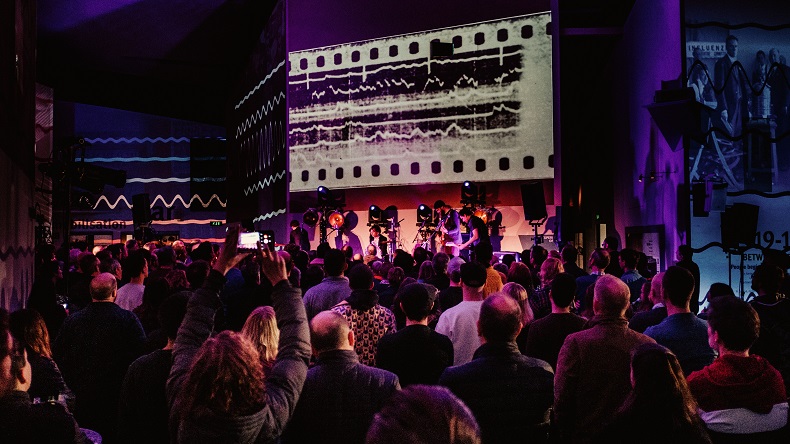 Back in September 2018, Imperial War Museums launched their Making a New World season, exploring how the First World War shaped the society we live in today. In a deft bit of programming, the museum commissioned Mercury Prize-nominated Field Music (David and Peter Brewis) to create a new sound and light performance to reflect this theme. As well known for their thoughtfulness and stupendous work ethic as their erudite pop, they seemed the perfect choice. The piece would debut at IWM North in January.

For initial inspiration, the Brewis brothers were shown a ‘sound range’ image from the IWM archives that illustrates the very final moments of artillery fire on the Western Front.

The band said, “The image shows the minute leading up to 11am on the 11th November 1918, and the minute immediately after. One minute of oppressive, juddering noise and one minute of near silence. This was the starting point for our suite of new songs. It was also the start of a new world.”

Each song captures a moment from WW1 and links it to a political development or technological advancement from the following 100 years, illustrating the fact that the consequences of the conflict continue to vibrate across the globe.

Walking into IWM North for the gig, it’s easy to see the impact of the sound range artefact. Each of the main gallery’s dramatically angled walls features a different floor-to-ceiling projection of a historical moment relating to WW1. (David Lloyd George is captured at his most imperious.) Over these images, six parallel lines wobble and flatline, giving the room the quality of a giant life support machine. It is these strands that draw the whole show together, and like all the best visual conceits, the genius is in its simplicity.

When the band starts up the lines pulse in time to a series of clatters and booms – found sounds the brothers captured by hurling random objects around in their studio. And then the song-stories start, with explanatory text running across the vast wall behind them. Coffee and Wine evokes the signing of the Armistice agreement in a private train carriage in 1918.

Best Kept Gardens, which deals with the story of Dr Chris Addison (Minister for Reconstruction in 1917), and his impact on the history of social housing, is classic Field Music. David Brewis handles vocal and drum duties with trademark nonchalance, and then, over a mellifluous descending phrase about roses and evergreens, the full panoramic FM harmonies come into play. That brotherly vocal blend has always been a thing of beauty, but it’s the additional lines from Liz Corney (keys) and guitarist Kevin Dosdale that create that truly widescreen sound.

Dosdale, also responsible for the visual elements, deserves recognition for the way in which he brings each story to life in text – such an important part of the overall piece.

There is often a contagious joy that emanates from Field Music when they play live, visible in their broad smiles and exchanged looks on stage. Last night felt a little more restrained. The song cycle was performed without pauses for banter or applause, and without the usual instrument swapping between David and Peter. This seemed appropriate for the subject matter, and the audience was rapt and respectful. Still present in the overall sound were nods to George Harrison, XTC, Prince and Queen, but this suite, with its twinkly glocks and filmic instrumentals also called to mind the High Llamas and Van Dyke Parks.

Peter Brewis takes the mic for A Change of Heir – a song about Dr Harold Gillies, a surgeon who pioneered skin graft techniques for wounded soldiers, and later performed the first gender reassignment surgeries. It’s this refrain that has stayed with me the most: if the mind won’t fit the body, let the body fit the mind, sung almost as a lullaby.

Only in a Man’s World is the best song I’ve ever heard about sanitary towels (did you know they were invented by a company that manufactured surgical dressings for WW1 soldiers?). It sees David channelling David Byrne in his taut yelp, “why should a woman feel ashamed?”

An hour in and we get Money is Memory, a song about the bureaucrat responsible for paying the final instalment of Germany’s War Reparation debt. Sounding like the next Field Music single, it boasts great sizzling guitar stabs that put me in mind of Carlos Alomar on Bowie’s Station to Station. The transitional rhythm track that follows slows woozily like a pitched down record and dissolves into a final meditative instrumental, Independent State. After a slightly awkward ‘is this the end?’ pause, the audience erupts, aware that that it has witnessed something unique – something musically transcendent and emotionally edifying.

In the accompanying brochure for the gig Field Music wrote: in writing these songs, we felt we were pulling the war towards us – out of remembrance and into the everyday – into the now. And that is the feeling that hangs in the air as the crowd, somewhat reverently, files out of Salford’s most awe-inspiring building into the January night. 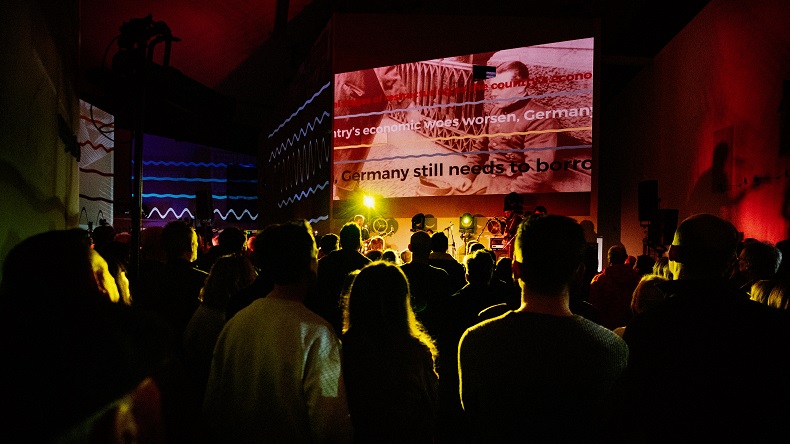