Louder Than War are big fans of Field Day, rating it one of the countries finest city centre festivals. Our man Keith Goldhanger was down at it for us this year and his review of Day one, in which he mainly re-united himself with lots of bands he’s already raved about on these pages before, can be found below.

East London, and the weather forecast looks grim but it fails to behave like the weather man threatened. It’s noticeable that not many came too prepared for the worse, therefore one can only assume that there’s probably a little phone app somewhere that some of us don’t have on our rubbish “pay as you gos” that means the forecast we saw on our TV is not worth the licence fee.

Therefore it’s with our heavy boots we trundle down a stop or two on the Central line to moan about the price of beer and chips and ask ourselves more than once during the day “Whatever did happen to Clock Opera ?”

Balloons … well there seems to be quite a lot of people really getting into the party spirit approaching the park, but there didn’t seem many once we got closer to the entrance gates…

And bands … some of them we’ve seen an unhealthy amount of times already this year and one artist in particular we welcome back with open arms and ask ourselves if this performance will be bettered all day, all weekend or indeed, all summer. 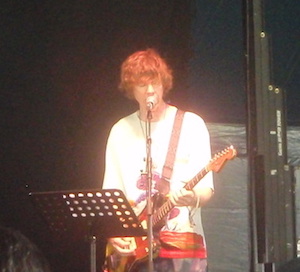 “Hi, this is our first gig, my names THURSTON (MOORE) , we’re from London” … says the very tall man from Sonic Youth (see pic right, © Keith Goldhanger) and then goes on and introduces us to 25% of My Bloody Valentine (Deb Googe), James Sedwards (Nought) and drummer Jem Doulton. With a bigger font on those posters this four piece could have been much higher up the bill than two o’clock in the afternoon. We get tunes based around one note that changes in tempo and frequency, chugging along with different bursts of intensity and we get a set of tunes that also sounds so laid back and glorious that we walk away humming Sonic Youth’s “Schizophrenia” wishing these new tunes to our ears were more familiar. We get the coolest band in the field that not everyone here is actually aware of yet. OK, there’s half a dozen other things going on at the moment in this park but this has proved to be a very good reward for some of us that got out of our beds on time today.

After a sneaky look at SKY FERRIERA & ARTHUR BEATRICE on the main stage (both very agreeable bands to listen to in the sweltering sun) and a trip around the other stages that make some of us realise we really aren’t as hardcore as we’d like to think we are (The massive “Bugged Out” tent seemed to be hosting very noisy bass heavy sounds and contain thousands of getting-messed up people high on Red Stripe) it’s back into the inappropriately named “Crack” tent to have a mid afternoon dance to SIMIAN MOBILE DISCO. Lots of bleeps, thuds and howling screeching sound bites that really kick this crowd into wild abandon. The chatting of reacquainted friends and the selfies below the “Crack” Logo have now ceased and the day has started.

It’s kinda common knowledge that Dev Hynes, Blood Orange, Lightspeed Champion & Test Icicles is all the same person spread over more years than some of us dare to count on our fingers, but the afternoons BLOOD ORANGE set had us phoning friends to check this was really the same guy. His cool demeanour and dozen plus associates on the main stage Dev made this something special that was certainly a popular choice for those starting to obtain their first sun tan of the year.

WOMANS HOUR on the Shacklewell Arms stage seem to be having technical difficulties, but after that cover version that you have to work out yourself for maximum effect and that first single about love having no rhythm, we clap out hands as they leave after the briefest of sets.

It’s at this stage of the proceedings when some of us have to remind ourselves that if you, the reader, want to know about some of the other bands that one or two of us haven’t raved about far too much about this year already, then we have to pull ourselves away from the obvious and seek out new life, new civilisation and to boldly go … yeah, you know… 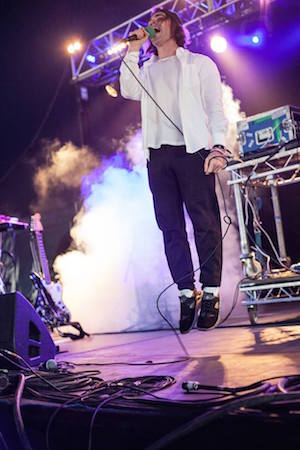 But JAGWAR MA (see photo right © Kiera Cullinane) are on and not everyone we know has seen these yet and when people say things out loud about not really knowing what to do next then you can’t go wrong with this lot. We’re ready to party and sod going to seek out something different. We’ll call this our dinner time, our time, our special time when some people would simply go and sit on a hill and read a book. I’m taking a lunch break and what could be better than to go and see this band again? We’re all in full swing again and we want to go and see these Australians that sound better than the Stone Roses ever did and dance our arses off again even though it’s still daylight. Again, we see a big crowd, arms in the air and singing along close to lung bursting verocity (sic) and again we wonder when this lot will be moved higher up the bill on events such as this and become the favorites of this nation’s youth and dancing hobbyists. Jagwar Ma did in London what they did in Liverpool recently and tore the bloody place apart. A few more years and a few more albums like their debut and there’ll be a generation of people booking their babysitters so they can take the evening off and dance like it’s 2014. The sun lowers and JON HOPKINS’ big thudding beats on the main stage are skimmed over in order to look at something new to us on the Shacklewell Arms stage called MONEY. Yet again plagued with a struggle to look relaxed due to what may have been on stage sound problems, this quartet played (and drank) their way through a set of tunes that were laid back, slow, joyous and dreamy. They remind us of those days when Joy Division or U2 were just additional bands on the circuit that filled out social diaries like countless others who are now resigned to the odd appearance in our John Peel sessions folders.

EAST INDIA YOUTH played the same stage a year previously at midday in front of a handful of people and played pretty much the same set of tunes today. The same set of tunes from his debut “Total Strife Forever” album. An album that some of us can’t stop listening to and a set of songs that get us swooning with delight one minute and punching the air the next. The tent is filled with hundreds twelve months later and it’s a joy to watch an audience singing along one moment and dancing their socks off the next.

Metronomy are on the main stage, we have a quick look. We should be at the front stroking our chins and discussing the indie dance crossover sound of 2014 that causes this lot to pull a huge crowd. Some of us, however, still believe that their debut single “You could easily have me” has never been bettered and there’s a bunch of blokes about to cause a fuss back at the Shacklewell Arms stage that go by the name of THE FAT WHITE FAMILY.

In front of hundreds and causing the first real old school mosh pit of the weekend – and a Glitter band singalong after the electrics have been turned of so we can all go home without too much fuss. They get better and better as the year progresses and we’re struggling to say different things about them except that there are people here in this tent watching and enjoying these headliners like they’ve not enjoyed a festival headline band for years. The Thurston Moore attendees have ended their day with a Fat white Family show. The bits inbetween have been great entertainment and the rain held off.

A well behaved audience leaving the site almost broken but consciously still geared up for another day tomorrow – some of them rummaging through those Amnesty boxes outside that are still in the same spot as they were ten hours previously … un touched by whoever put them there. The party continues for some….

All words by Keith Goldhanger. More writing by Keith on Louder Than War can be found at his author’s archive. He’s also on SoundCloud, Facebook, and tweets as @HideousWheeelInv. Photo of Jagwar Ma by Kiera Cullinane.