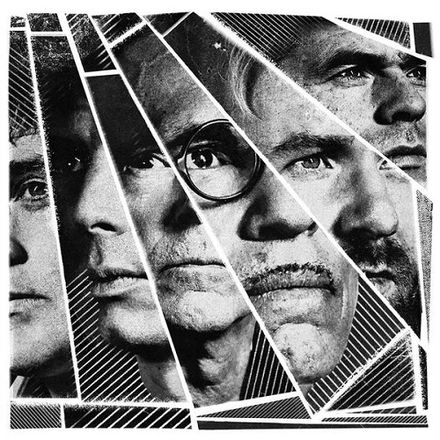 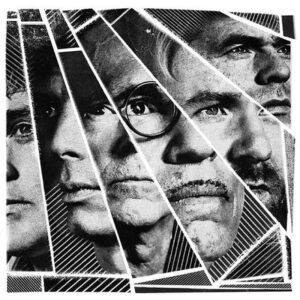 A collaboration ten years in the works, Franz Ferdinand and Sparks join forces as FFS. Fergal Kinney finds out if the album is big enough for the both of them.

IT was in 2004 that Franz Ferdinand, in the midst of the whirlwind success of their debut album, were first caught by the Mael gaze. In the angular, wry art-pop of ‘Take Me Out’, Sparks quite rightly felt they had found kindred spirits. This intuition paid off. Slowly. Alex Kapranos was indeed a massive Sparks fan – Franz Ferdinand’s early rehearsals had involved a rendition of the ‘Indiscreet’ track ‘Achoo’ – and the two bands promised to be involved with one another before the tide of both their careers got ahead of them.

It’s hard to view Sparks as anything other than their own private world – not unlike the Fall, only with a pencil moustache instead of Holsten Pils, quietly beavering away at their craft whether fashion is on their side or not at that particular moment. For Franz Ferdinand however, their output since their colossal selling debut has largely been more compromised and patchy until 2013’s real return to form ‘Right Thoughts, Right Words, Right Action’. Fresh from the creative success of that record, a chance encounter between Kapranos and the Mael brothers (at the dentists) saw the two bands finally in a good position to begin their merger.

‘Johnny Delusional’, the first track on the album, makes instant sense of the new world of FFS. Disco-tinged with chopping, art-rock guitars before an infectious pure pop chorus, it’s very much of the same DNA of Franz Ferdinand and Sparks yet unlike anything else they’ve managed to achieve separately. The character studies of ‘Dictator’s Sun’ and ‘Little Guy from the Suburbs’ are in turns wry and unsettling, whilst ‘Police Encounters’, with its ‘bomp bom diddy diddy’ refrain is a thrilling cocktail of Franz Ferdinand’s dancefloor sensibilities and Sparks’ idiosyncratic pop. Kapranos clearly has a fan’s relish for entering into the Sparks world, and within the collaboration it’s Franz Ferdinand who concede most ground – in short, the record sounds more like a Sparks one than it does a Franz Ferdinand one. Take ‘So Desu Ne’, harking back to the band’s work with Giorgio Moroder on the ‘Number One Song in Heaven’ album, or tracks like ‘Piss Off’ and the excellent ‘the Man Without a Tan’ that owe much to the classic ‘Kimono My House’ sound with which the band are still associated.

Vocally, the dynamic between Russell Mael and Alex Kapranos is one of the real strengths of the album, intent on forging a genuine collaboration between their two voices as oppose to a compromise of separate but equal. This is a wise gamble – both do a good line in crooning, have a great ear for a punchline and interact with much of a Nancy and Lee dynamic. And though an FFS sound is found across the album, it is seldom formulaic, only tracks like ‘Save Me From Myself’ and ‘Things I Won’t Get’ guilty of lacking the excitement that makes the best of the album thrive.

The penultimate track is a near seven minute satire on the dynamics of collaborations, and you could be forgiven for suspecting it all about to become a bit arch and knowing. Fear not – ‘Collaborations Don’t Work’ is ambitious, experimental and often incredibly fun. Starting life as a lo-fi strum before running the full gamut of Pythonesque high camp, shrieking insults and sizzling crooning, this is the real high water mark of the album. “I don’t think you’re really trying” Russell Mael screeches, whilst later Kapranos retorts “If I ever need a father it won’t be you old man”. This is an album brimming with (very good) character studies, but it’s when FFS turn the gun on themselves that it really works. Final track ‘Piss Off’, a vaudeville hymn to the joys of solitude (“get to the point and point to the open door”), is a kinetic sweary joy and, along with ‘Collaborations Don’t Work’, one of the album’s enduring highlights.

On paper, much about the FFS album was always going to work – these are two artfully minded bands with much of a shared sensibility and obvious affection for wry yet dramatic pop. But what makes this album stand out from other collaborations is the extent that both bands are willing to concede territory and find something genuinely interesting in the process. This is a rich, rewarding album from two virtuosos of art rock – collaborations do work, but seldom as well as this.