Fever, a great new guitar band from Southampton, release their debut single. Ged Babey asks himself – can you judge how good a band are on just two songs?

Louder Than War gets hundreds of bands and artistes submitting music for review every week. How do you sort out the wheat from the chaff.? The pearls from the swine? The truly great from the mediocre…?

A great band, in my book, have to have an immediacy (all the early punk bands had it, but I’m not neccesarily talking about the pure mania of punk rock ) It might be a hook or a vocal inflexion or a chorus or just something indefinably memorable about a song that makes you want to hear it again immediately the very second it finishes. And then again…

Well, Shell Shock by new, young Southampton band Fever is one such song.

They are an indie guitar band who seem to fall somewhere between the Grunge and Britpop genres (Gritpop I suppose!) and avoid current beardy-hipster woollyness. The NME  described them at the end of last year as “something between the Grateful Dead and the Wytches” (which could explain why so few people read it any more).

They rock, but in a slack, melodic way. What would’ve been called “the b-side”  – a song called Why – is a two minute slice of Libertine pop but its Shell Shock which is the eye-opener, the game changer.

I still can’t work out what the first 10 seconds remind me off…. but once the first chorus kicks in it sounds amazing; kinda like early Muse (when they were interesting and bearable) playing in a garage or the great lost post-punk band The Sound or the Nineties great lost band Stony Sleep. There’s just something about the singer’s wavering voice that convinces.

Shellshock by Fever can be listened to below or on Soundcloud.

It could be a one-off, the only really good song in their repertoire, a fluke… but somehow I don’t imagine it is.   But for now, just have one more listen…then another.

You can buy the single from I-Tunes and other such retailers and is free to download from the band via Facebook or at their gigs.  The single launch details are on the flyer below.

All words by Ged Babey, find his Louder Than war archive here. 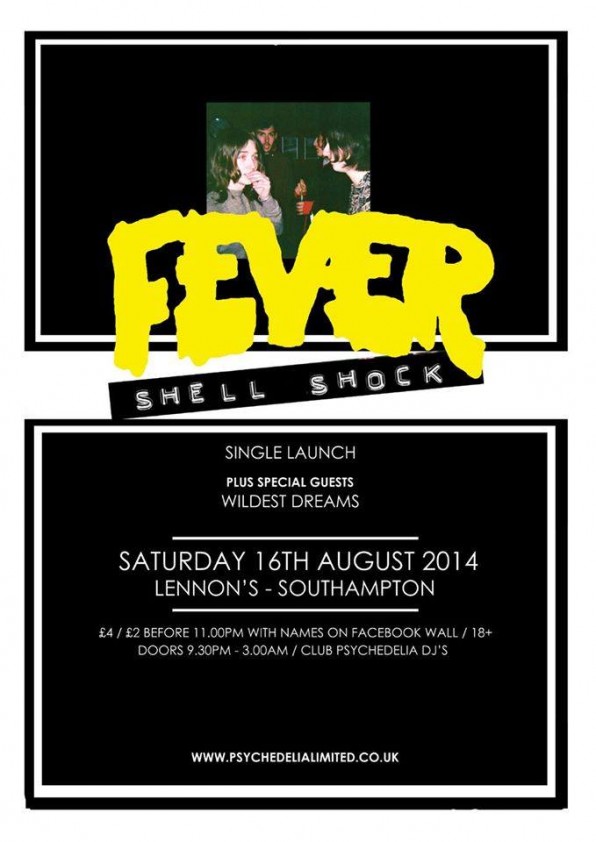