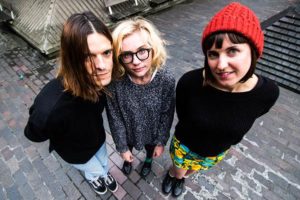 Fever Dream are Adrian Fleet (guitar, vocals), Sarah Lippett (bass) and Cat Loye (drums) and they are currently ploughing the fertile and ferociously fucking noisy furrow that the welcome resurgence of shoegaze is currently reaping. They have managed to build up a wealth of support since their formation including praise from Lauren Laverne at BBC Radio 6 Music.

With Heads Will Roll, Fever Dream seem to be drawing inspiration from lush soundscapes by bands such as MBV, Slowdive and The Telescopes. Yet the lyrics, mixed with noise interludes and some fierce sonic dissonance, allude to more of a Sonic Youth or Pixies influence.

Either way, the throbbing bass and noisy start shows great promise. The stop-start vocals, and noisy instrumentation are reminiscent of Garbage at their best. The all-encompassing noise is pretty full on and played out loud (without a heavily pregnant GF upstairs as I have now) must be gorgeously intense.

It’s all over too quick and leaves this listener wanting a hell of a lot more from this band. Nice stuff.

The Fever Dream album, Squid, was released on 29th September on Club AC30