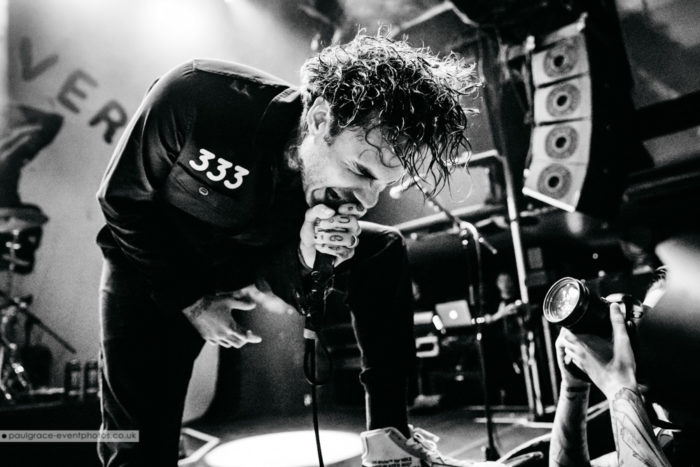 “Let’s give a shout-out to the NHS!”, isn’t the type of banter you’d expect from a Los Angeles-based band onstage. But The Fever 333 aren’t your average band. Louder Than War’s Andy Duke reviews the trio’s explosive gig in London and discovers why they have big love for the UK’s healthcare system.

The O2 Academy Islington is filled to capacity. Slavery songs puncture the hot air via the venue’s PA. And, thanks to a curtain being draped across the stage, little is given away in terms of what to expect from the band’s stage show. Anticipation is as heightened as the crowd are restless. As the lights dim down, the audience’s spring-loaded legs prepare themselves to be unleashed. Eyes start zeroing in on the black and white news footage that’s projected onto the stage – curtain still in situ. Sub-bass drones rumble the floor as a pre-recorded announcement advises everyone about the cause and treatment of fevers. In tandem, a lone figure in a black KKK-style hooded glory suit stands menacingly in front of the stage. The footage is a nightmare vision of warfare, demonstrations and dictators. The health alert message gives way to sound bites referencing racism and hate. And, with an almighty sonic boom, the curtain drops revealing yet more people in black hoods. All emblazoned with the angel number – 333. As the intro to Burn It makes its looming presence known, the original lone figure takes off his hood. Its lead singer Jason Butler. The Angel Klansmen quickly disperse leaving just the three members of the band to kick off the show in earnest. By the time the first chorus arrives with its “sometimes you gotta burn it down/build it up again” mantra – Butler and guitarist Stephen ‘Stevis’ Harrison have bounced their way over every millimetre of the large stage. This is a high-octane gig from the off. And it speaks volumes that the crowd know every word of the track despite this first offering having not been released. There’s no letup in the energy levels as snare hits and sub-bass drones provide the foundation to the vocal dominated intro of We’re Coming In. By the time the intentions of the ‘boys in blue’ are questioned in the song’s middle-eight, Butler has managed to climb to the top of the lighting rig. And, high up in the rafters, he rallies his dominion of fans with the shouted repeat of ‘we’re coming in, motherfucker’. Meanwhile, drummer Aric Improta is jumping up and off his stool and/or kick drum at every given opportunity. There are some musicians who celebrate space in music, however long or short, by disappearing into the shadows and embracing the silence. In the case of Improta, however, it’s merely opportunity to launch cymbals, tom toms or himself into the air. But when he returns to the kit, the precision and rhythmic dexterity on display is an outstanding force. 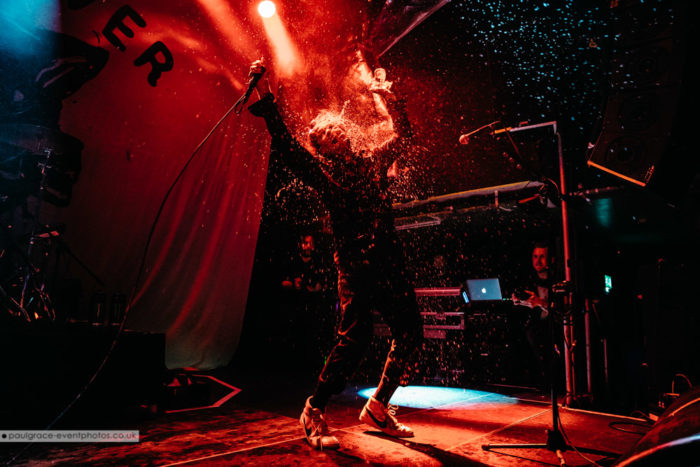 Despite being compared by critics to Rage Against The Machine, which is indeed apt, I see a more wide ranging set of influences in The Fever 333’s live set. Thanks to the group’s well-honed grasp of extreme dynamics, where verses are sparse and choruses are everything but – there’s ample room and opportunity for the trio to traverse the stage. And, when not masterfully executing his ‘tight as you want them’ guitar riffs, Harrison takes on the frenetic role as Butler’s wingman while the electro-infused low end takes over from his six string. From a visual standpoint, where the guitarist and singer alternate sides of the stage with rapid fire speed, this recalls the highly effective partnership of Chuck D and Flavor Flav from Public Enemy. And, with his beatbox impressions and machine gun vocal delivery – it’s safe to say that Butler has an affinity with rap music both past and present. But there are many more shades to what is offered in his stylistic canon. The ex-Letlive vocalist can do effortless pendulum swings between hardcore screaming and a pristine anthemic delivery that wouldn’t be out of place on a Linkin Park record. Alongside the politically-infused and passionate material is a pop sensibility that, ultimately, gets the crowds singing. And the attendees do that very thing with great collective might as the band launch into the emotive chorus of Made An America. This lot are as heavy as their tracks are catchy. But catchiness isn’t at the expense of Butler’s mission. On Trigger, for instance, the Inglewood-born singer addresses his strong views on gun-control. This is understandably a very sensitive subject matter Stateside. And, with hardcore punk fans coming from both sides of the political fence – Butler and his band are acutely aware of how taking sides can create derision. While Butler’s views are as strong as they are clear in his lyrics, the charismatic singer handles his politically-themed banter in a measured and diplomatic way. Ultimately, he urges everyone to feel free to challenge the forces that they fear may be trying to control them regardless of party allegiances. He also delicately conveyed his opinions on the high cost of healthcare in the US by praising the glories of the NHS. “My mother is Scottish and I used her details to get them to fix me over here. Here’s a big shout-out and thanks to the NHS!”. 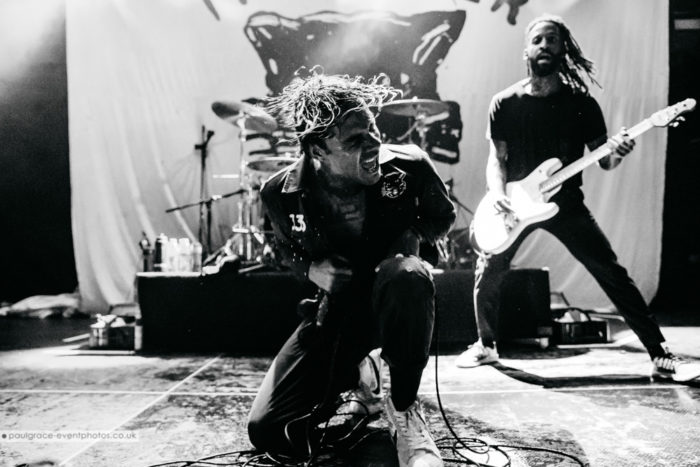 While praising a nation’s healthcare onstage is certainly novel, the band occasionally delves very nearly into well-ploughed rock clichés. But they get away with it by making unique tweaks. Drum solos, for instance, could be considered an overwrought addition to a set no matter how well executed they are. And Aric Improta is a world-class drummer. But, when you turn a drum solo into a call and response exercise with Butler’s beat box – it becomes a USP in the set. And, in a way, this represents the appeal of the band. They’re ultimately much bigger than the sum of their parts and it’s this alchemy, chemistry and passion that makes for an enticing and engaging performance.

Championing the subjugated is an important theme for Butler. Prior to performing Southside, an ode to the part of Los Angeles that he calls home, Butler urges fans to not feel ashamed of growing up in ‘the ghetto’ adding that “adversity isn’t something to strive for but also isn’t something to be ashamed of”. He also performed an exercise involving submerging the venue in total darkness and asking audience members to raise their hands (and keep them up) whenever a minority characteristic he recited was relevant. The end result revealed a fully illuminated venue and a complete show of hands. The minority became the majority. Music, as Madonna once exclaimed, makes the people come together.

Following incendiary versions of Prey For Me, One Of Us, Soul’d Me Out and Walking In My Shoes (the last two of which feature on their debut release Made An America) – The Fever 333 finished their set with Hunting Season. As the track reached its climax, Harrison began swinging his guitar in time to the flashing strobe lights and cymbal stands were brandished with the wild abandon of a post victory flag wave. “I can’t believe this is happening to me again”, Butler gasps just prior to thanking the crowd for a special and unforgettable night.

Music has got a lot more exciting thanks to The Fever 333. And that fever is spreading. Long may it be contagious.

Watch The Fever 333’s video for Made An America here.