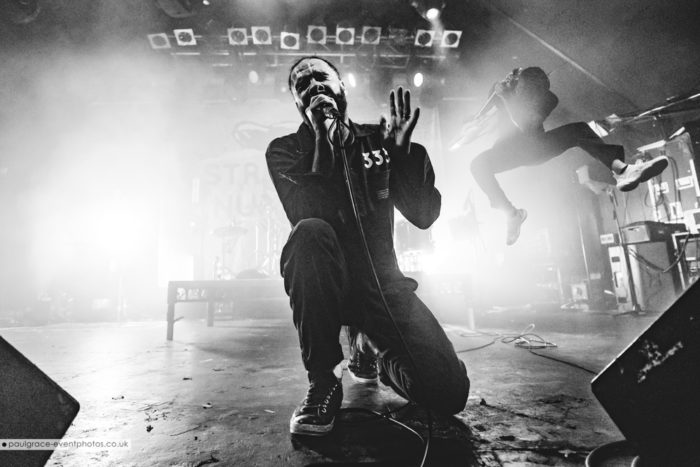 Fever 333 bring their urgent call for community, charity and change to London’s Electric Ballroom and deliver an explosive show. Paul Grace photographs and reports for Louder Than War.

I was first made aware of Fever 333 at Download last year when I asked my fabulous photographer friend Jenny who she was most excited about seeing at the festival. “Definitely Fever 333..they’re unreal!”, Jenny enthused. Fast forward to the Friday afternoon and the energy that the Los Angeles trio brought to Download, together with the impact they left on the crowd was nothing short of awe-inspiring. Moreover, their spiky fusion of punk, metal, rap, hip hop and activism had also opened the eyes and ears of the music press as rave reviews swiftly followed.

I therefore jumped at the chance of heading to Camden’s Electric Ballroom to experience the Fever 333 adrenaline rush once again. Since Download 2018 they’ve released an album (Strength In Numb333rs), received a Grammy nomination for best rock performance, and have continued to spread their mission statement of  ‘community, charity, change’ across the world. Referring to their live shows as “demonstrations” rather than gigs, Fever 333 deal head-on with systemic issues of immigration, race, class, warfare and inequality. In Trump’s America and Brexit Britain, these guys are angry, want change and want it now.

There’s no support at Fever 333 gigs – if there was it would simply dilute the poignancy of the message.  The capacity crowd are buzzing with anticipation, and at 9.30pm the house lights dip, a growling bass, distorted vox, and angry chants filter through the sound system. Suddenly an almighty cry breaks, “There’s a mother fucking fever coming!”, as singer Jason Aalon Butler, drummer Aric Improta, and guitarist Stephen Harrison explode onto the stage. The slamming attack of Burn It opens and within seconds the packed room reaches fever pitch as limbs fly everywhere and all hell breaks loose. 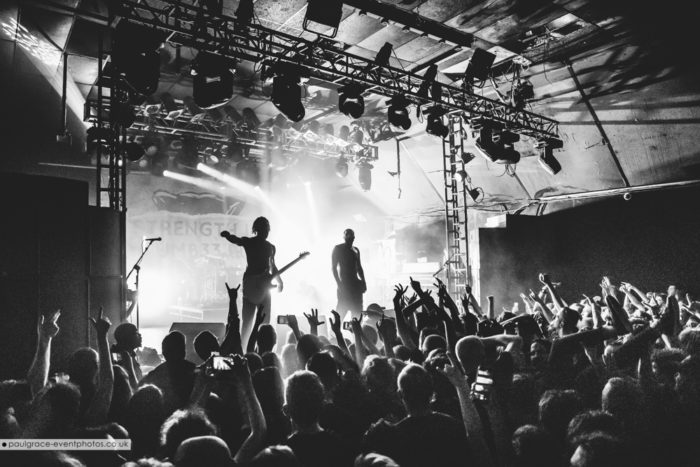 It’s a truly remarkable sight and so sets the scene for tonight’s emotive demonstration. Like a persistent kick in the face, the trio blast through a 60-minute roller coaster ride full of emotion, music and discourse.

Their biggest tune to date, Made An America, has the crowd singing along, while Harrison jumps and twists, guitar firmly in hand, without missing a note. A formidable feat.

Preaching to the converted, the demonstration is fused with an overwhelming feeling of community and togetherness. Without doubt, however, it’s the conviction with which Butler delivers their message that takes Fever 333 to the absolute next level. In One Of Us, the singer goes for the jugular by calling out the sexist culture that exists within the music industry. He screams, “Tonight there is no room for that misogynistic patriarchal bullshit…women should feel safe to be in this room, they should be celebrated and respected!”.

Butler is known to climb pretty much anything and everything at Fever 333 demonstrations, from lighting rigs to balconies, but tonight doesn’t stray too far away from the stage (apart from a brief appearance in the pit during Prey For Me). Guitarist Harrison, however, appears triumphantly at one point on top of a speaker stack.

Fever 333 bow out after a double song encore; We’re Coming followed by Hunting Season, the latter featuring an impromptu drum solo with Butler bashing the drum skin with his mic.

Tonight’s demonstration is proof that Fever 333 continue to rise and are already a mighty force to be reckoned with. Towards the end of the show, Butler revealed how he was worried about filling their next London venue in November (The Forum), which is almost double the capacity of tonight. There should be no cause for concern though as, judging by tonight’s reaction, their loyal following will turn out again in droves – myself included.