Home Blogs Festivals, fundraisers and plenty of music to end the month in Manchester 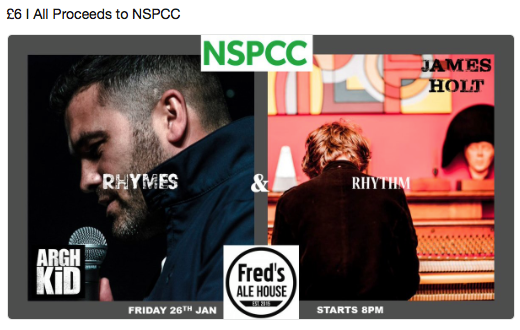 January is a month where some of the most exciting developments in music can happen. What do I mean? Although you may associate Summer with festivals and celebrations, these early months of the year are an opportunity for you to catch talent at its freshest and most innovative.

In Manchester, there is a massive array of events and music-led opportunities occurring towards the end of January – from festivals to spoken-word and rhythm combinations. Here is just a selection:

Rhymes & Rhythm – (The rescheduled ARGH KiD and James Holt ‘Rhyming Home for Christmas’ collaboration) at Freds Ale House
There will be an hour of rhythm and rhymes raising money for NSPCC this Friday 26 January at Freds Ale House, Levenshulme, 8pm onwards. Even better, it’s a collaboration between the poet of powerful ‘pub toilet sink realism’ ARGH KiD and musician and singer James Holt – so you can expect street-smart words with wonderful tunes. This popular line-up was due to take place towards the end of 2017 – but a reschedule means there has been time for even more exciting developments. There are even rumours of a collaboration… – Recommended donation £6 on the door, all proceeds to charity.
https://fredsalehouse.com/live-music/argh-kid-fri-01262018-2000

Tilted Music Festival
Want a bit of something marvellously wonky to end January with? Tilted Music Festival is happening for the first time in Manchester’s Northern Quarter at AATMA this weekend: with an all-day event on the 27 January 2pm-3am. So that’s more than 12 hours of live bands, poets and DJs.
Some picks include prolific songwriter John Sterry AKA BILLIONAIRE, Code: Marla in its fusion of electronic music genres with live rock based elements, Mutabase delivering fierce feminist punk and Vieon creating emotive and evolving electronica which is out of this world. £4 Early Bird/£6 Standard/£7OTD
https://www.wegottickets.com/event/427124

LuCoo Live All Dayer
Another all-day event in Manchester’s Northern Quarter on this Saturday 27 January, but based in Jimmy’s NQ and with a distinct Psychedelic feel and lots of live action. A number of musicians are sure to create a mood like no other including a headline set from Dantevilles as well as music from Hello Operator, Gardenback, Louie Louie, The Goa Express, The Nix and Maddy Storm. Times are from 3pm til 11pm and sponsored by Pabst Blue Ribbon. A marvellous line up: so be sure not to miss out – this is fresh, fiery talent at some of its finest.
https://goo.gl/11hGBh

Stampede Festival
A new urban based festival for a taste of something fresh in the north – celebrating multiple Manchester music artists and bands within the urban genre. It’s set to take place on Saturday 21st July at the AJ Bell Stadium in Salford, with the first line of acts being released this Thursday 25th at 8pm. Then be savvy the following morning, as Early Bird tickets for ONLY £15 will be available on a first come first serve basis and will be on sale from 9 am on Friday 26th – so avoid the stampede for tickets and get in early.
https://www.facebook.com/StampedeFestival/

Manchester Meltdown Event 5
The fifth instalment of Ian ‘Moet’ Moss’ curated music nights along with German Shepherd Records at Manchester’s Northern Quarter venue The Peer Hat – be there on Wednesday 31st January from 7pm. Only £3 on the door gives access to see 5 different artists including Four Candles, Monkeys in Love, Nick Alexander, Mark Corrin and watch as Black Helicopters become their new namesake – Diagonal Science. A night of raw, resonant local talent not to be missed, sure to add to the already outstanding success of weekly events all this month.
https://www.facebook.com/events/147284282641423/

DAS ICH + special guests Astari Nite, St Lucifer & Room 1985
One to note for next month is what is set to be a blistering line-up of underfloor noise and electronica which really will get February off to a good start.
On 2 February at the Ruby Lounge in Manchester the legendary DAS ICH – German pioneers of the genre ”Neue Deutsche Todeskunst” (New German Death Art) in the 1990s – will be headlining, with electronic music of ultimate intensity.
Special guests include the new-wave post-punk blend of Astari Nite, the industrial anti-pop inventiveness of St Lucifer and the Psychedelic Space Rock vibes of Room 1985. Awesome. Doors 7pm: don’t miss out.
https://www.facebook.com/events/806155782897496/