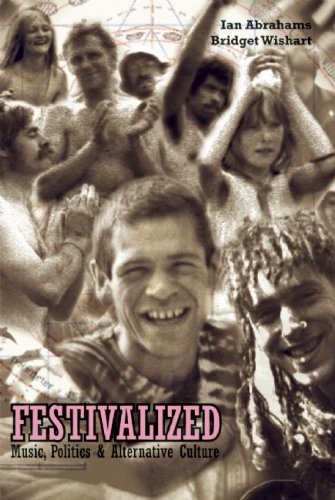 Out now via Gonzo Media Group

Louder than War have a read of this fascinating insight into the counter culture movement of the free festivals during the 70s, 80s and 90s.

Subtitled ‘Music, Politics and Alternative Culture’, Festivalized is a fantastic introduction to the British Free Festival movement of the 70s and 80s, through to the raves of the early 90s. Written and compiled by writer Ian Abrahams and ex Hawkwind, Hippy Slags, member Bridget Wishart, they have managed to craft a ‘beginners guide’ slash starting point for anyone interested in reading about this fascinating time in Britain’s cultural past.

Drawn together from interviews from around 50 key contributors, including Nik Turner, Mick Moss, Chris Hewitt, Michael Dog, Keith Bailey, Penny Rimbaud, as well as seasoned attendees and people integral to the ‘movement’, this book reads like not only a who’s who of the instigators of the festivals, but also the tales of the ones who helped set up the festivals, sourced the sites, dodged the police, sweet talked the farmers, dodged the police, supplied and fixed the (rudimentary PA system), paid the farmers, erected the stages, bought the grass, oh and dodged the police. And it is also an eye witness account of the performers and the attendees that helped make the ‘events’ what they were and were witness to what the ‘free festival movement’ would become.

Right from the start, the writers acknowledge that this is no way a chronological history of the movement, and certainly not a place to come to see who played at 7.30pm on Saturday at the Windsor Free Festival in 1973. There are other places to get that info. Instead, what you get are stories and anecdotes direct from the people who were there at every stage of the way and the story is built up by these fascinating, often hilarious tales from the beginning, right to the (inventively) bitter end. And to some degree, there was a bitter end. The book may not intend to be a chronological overview of the free festival scene, but if you have any prior knowledge of the movement, then you will know that the continued patronage of these festivals, combined with a growing counter culture growing within the so called ‘new age travellers’ community, at some point brought it to the attention to the government and ‘the establishment’.  And they subsequently felt the need to intervene, which ultimately culminated in the devastating and brutal events of the ‘Battle of the Beanfield’ which is well documented elsewhere and angrily retold in the eponymous Levellers song off their 1991 Levelling the Land album.

However, coming back to the crux of the book. What you have are the people and stories merging to create a well documented and absolutely fascinating time of the music, culture, sexual freedom, political and capitalist changes affecting the British people between the 70s and early 90s. There are tales of broken down vehicles, near misses, arrests, successes, failures, quagmires, violence, peace and babies being born at sunrise. Part of the beauty of this book is the documenting of a time when people were free (to a certain extent) to do whatever they wanted to do as long as finances and circumstances allowed. Part of the depressing side of this book is way that the establishment, the government, life (?) can get in the way of said freedom and liberty. However, even among the counter culture people involved in this time, there was capitalism at work. Drugs don’t come for free. If you wanted to get high, there was someone who profited from it. And I’m guessing this fact was just one of the reasons that that the ‘free festival movement’ had to be shut down. There is always money to be made by a person wanting to ‘drop out’ of society for a weekend. And thus came the festivals that we have today that are heavily policed, heavily priced and are heavily burdened by health and safety laws. And to a certain degree, this isn’t a bad thing and some fringe festivals are still bucking this trend and trying to keep the organic and ‘free’ elements as much as they economically can. But I fear things will never be the same way as presented in ‘Festivalized’. The world has changed too much.

This is a great book and essential reading for a time that may never be seen again. It is historically important (and accurate) and should be used as an aid to inform future generations of both the possibilities and dangers of embracing counter culture. The contributors are engaging and tell such brilliant stories and anecdotes. On top of this you get some great photos and some festival layout diagrams that are both fascinating and again, historically important. The content is at time hilarious and at times very emotive. At times it is sad and it is also infuriating. But, it is never boring. A great must read.