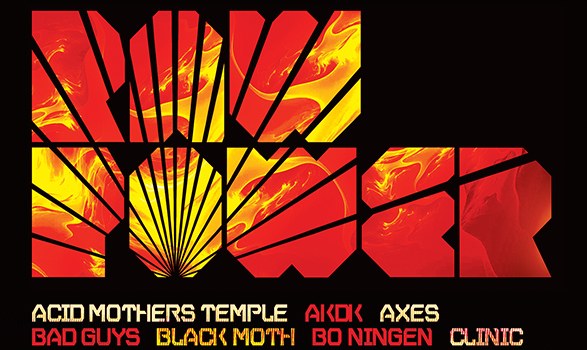 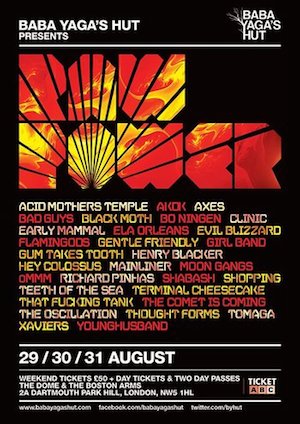 Taking place across a couple of venues in Tufnell Park, London, at the end of August is Raw Power Festival featuring some of the best psych heaviness, space rock, synth craziness, left field electronica and much more. The line up looks incredible and we’ve got a brilliant mix of artists playing it to whet your appetite with below along with more details about it.

Festival organiser Anthony Chalmers has been promoting some of the best, most eclectic and exciting gigs in London for some time now, so it makes sense that when he puts his mind to programming a whole festival it’s going to be pretty damn unmissable.

And such is the case with Raw Power Weekender. Flying under the banner of Anthony’s usual promotion unit, Baba Yaga’s Hut, Raw Power Weekender, over the weekend 29th – 31st August, will be featuring a typically extensive bunch of maverick performers running the gamut a whole host of genres as listed in the intro above.

It’s not often those of us living out in the sticks are jealous of London dwellers, but it certainly is in this case.

A complete list of artists playing the festival can be found below, but names that jump out at us as we scroll down the list include our own Evil Blizzard (of course), Bo Ningen, Teeth of the Sea, That Fucking Tank, Acid Mother’s Temple, Thought Forms, Clinic, Henry Blacker and Girl Band. But frankly even trying to pick highlights from a lineup as excellent as this is an exercise in the perverse.

Tickets for the weekender can be purchased from this link right here with weekender tickets costing £50 (day tickets & two day passes are also available.) The festival will be taking place across two stages at The Dome and The Boston Arms. For up-to-date news on the festival you’re advised to tick “going” on the Facebook event page. Meanwhile, Baba Yaga’s Hut itself can be found here on Facebook and on twitter as @byhut – which you probably already know if you live in London.

Last week we asked Anthony if he wanted to throw a mix together for us featuring some of the bands playing the festival. He agreed before coming back to us and asking if we’d be ok with just embedding his usual weekly show off of Resonance FM if he made it a festival specific one. Needless to say we had no problem with that. So the mix / radio show / podcast has already been aired once, in the Baba Yaga Show’s usual Friday noontime slot on Resonance FM (which also makes this a handy little plug for that!) Check it out below.