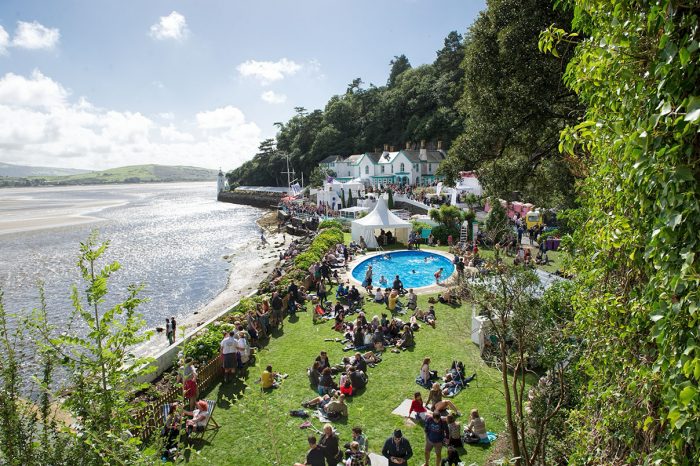 Louder Than War photographer Melanie Smith reports back from the unique boutique family festival N°6, set in the idyllic setting of the Italianate Portmerion village on the North Wales coast, built by the architect Sir Clough Williams Ellis. Also famous for the 1960’s cult TV series The Prisoner, its now in its 5th year and bigger than ever – a festival like no other!.

It all started for me on Friday, the weather was glorious, the sun was out and the scene of the most beautiful festival had been set. The obligatory trek around the site to get to grips with stages and how realistic shooting the bands and events you want to see proved to be a daunting task as the area is quite vast in size. It has a plethora of music, talks, well being sessions, comedy, cinema, food and cabaret. The age range of punters are wide ranging, from kids, to pensioners and everything in between, but its great to see older people enjoying themselves, like the two pensioners on the bus, still smiling from their day, wearing glittery face make up. Who said festivals are for the young? 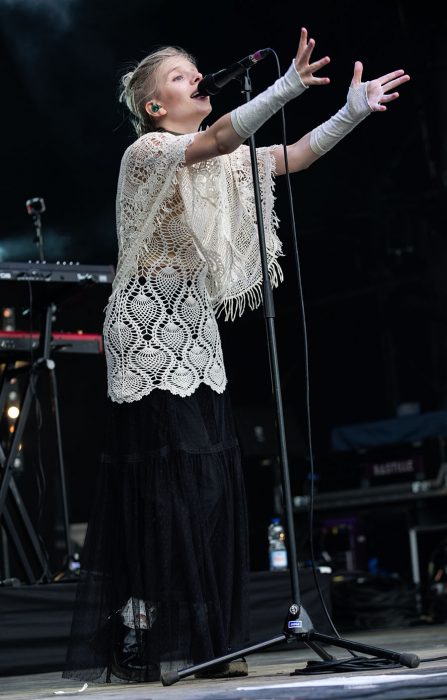 Starting off in the woodlands area, catching Manchester band Horsebeach at the ‘In The Woods’ stage. Leeds band Eagulls are next in the Grand Pavilion, where an irritated George Mitchell (vocals) spouted about things going wrong at festivals whilst waiting for their sound to be perfected.

Then it was time for the main stage to commence, first up were Liverpudlian buzz band Clean Cut Kid who managed to entertain the punters with their upbeat rhythms. Welsh songstress Gwenno packed out the Grand Pavillion with an awesome set and the Norwegian singer Aurora took to the main stage and proved to be both a sound and visual delight, as she seduced the crowd with her ethereal delicate music, which fitted right in with the surroundings.

The Kaiser Chiefs Ricky Wilson jumped and bounced around the N°6 stage like a man possessed, despite having one of his legs in a brace, straight into  ‘Everyday I Love You Less and Less’ then straight into ‘Everything is Average Nowadays’ and the huge crowd which had amassed sang along. 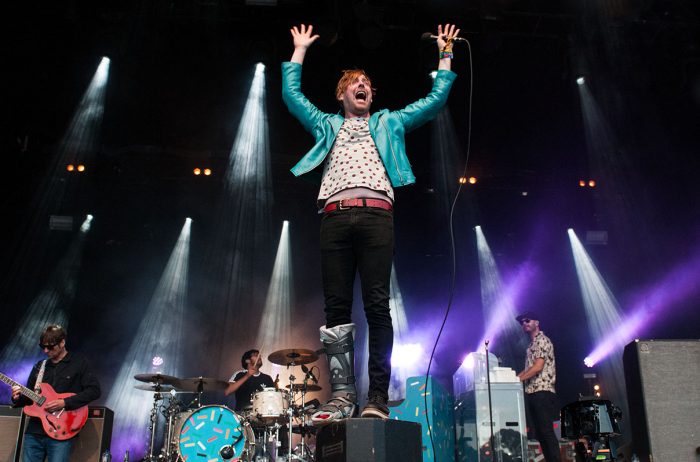 Back in the centre of  the village known as The Central Piazza we were a little captivated by the Brythoniaid Choir from Blaenau Ffestiniog, who sang classic songs from artists such as New Order ‘Blue Monday’ and the Liverpool anthem ‘You’ll Never Walk Alone’.

The parade followed with a crowd of fire torch carriers, lead by Mr Wilsons Second Liners. We ended the night with a trip to the Meirion Rouge tent to see a bit of late night cabaret, in the form of Jones & Barnards escapology performance, followed by artist Miss Behave who did unspeakable things with her tongue and that was my Friday night done and dusted. Read on below for Saturday night, which proved to be far more challenging.

Saturday had held such promise, but due to the shocking weather of heavy rain and wind a lot of the scheduled shows were cancelled, the Woodlands area had to be closed for health & safety reasons and a variety of parades and performances didn’t take place. Although we had the festival app on our phones it didn’t update due to having no phone signal. The ground was very muddy and the rain was pretty consistent throughout the day. The indoor tents were packed out from people taking refuge so it was difficult to gain entry. However I did manage to capture a few of the artists on the main stage, such as Stockport’s own Blossoms, on top form and receiving a lot of adoration from the rained on crowd. Roisin Murphy was quite the professional as she performed in the heavy rain as it showering onto the stage, despite saying it was a health & safety concern up here.

John Bramwell from I Am Kloot was entertaining the troops down at the Central Piazza, then came the turn of the Salford punk poet Dr John Cooper Clark introduced by poet Luke Wright. By now we were really beginning to flag, wet, tired and weary, so we remained for the lantern parade and then hot footed it to the coach.

Back at the park and ride we got stuck in the mud and had to be towed out, so we decided not to risk going back the following day as weather forecasts were not good. This proved to be the best decision we made as the following day all hell broke loose and the car park resembled a swimming pool in places. No one can predict the weather, but unfortunately and tragically it really did impact badly on this festival.

Photos and words by Melanie Smith. More work by Mel on Louder Than War can be found at her author’s archive. You can find her on Facebook and Twitter. Photography portfolio can be found here and Flickr