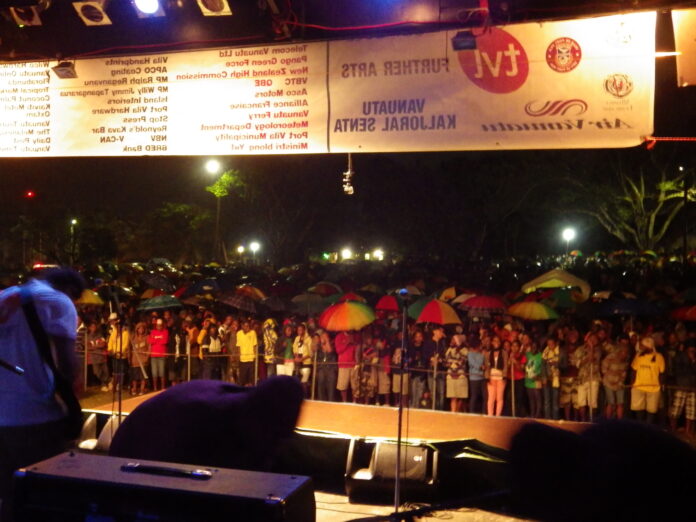 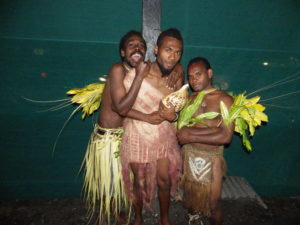 He’s usually found reporting on the Australian music scene but our man Simon Proudman headed to the Pacific Islands in October for Festival Napuan.

One of the biggest annual music festivals in the Pacific Islands happens in Port Vila, Vanuatu every October. The Fest Napuan showcases the best in Pacific music, and attracts bands from New Zealand, Australia, New Caledonia, Papua New Guinea and the Solomon Islands as well as from the many small islands of Vanuatu. We were there to experience a festival that shared one major thing in common with Glastonbury apart from great music, huge amounts of rain and mud.

Located at Sarafina Park just outside the CBD there are already traffic jams of local buses, privately owned converted transit vans in various states of disrepair. The festival is big event in town and even the torrential rain which is bouncing off the road in its ferocity does not prevent a huge turnout. The park is surrounded by palm trees, and although wet, the air is still tropically warm. If you are going to get wet, you might as well do it in warm rain than cold drizzle.

Due to travel issues a number of bands from other island nations have not been able to make the 19th Fest Napuan, leaving the local bands to headline. The crowd reaction is noticeably calm, watching beneath a sea of umbrellas but rarely doing more than engaging in modest clapping. That is until the Friday headliners take the stage, ‘Stan and the Earthforce’. Stan risks electrocution as he gets off the stage and dances on the slippery platform in front as the rain pours down. Security have a hard time restraining the front row and cannot prevent a stage invader dancing with the lead singer as the band belt out their Vanuatan reggae songs. 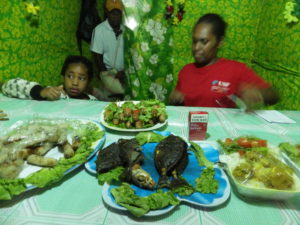 One thing that does differentiate Fest Napuan from the other festivals we have attended was the vast array of food and drink options available from the palm and coconut leaf covered stores which surrounded the park on all sides. Chicken and rice dishes, a staple of the Pacific, could be bought for two pounds, or a whole fish and rice for three pounds. British festival goers would be overwhelmed with the choices and prices. Cold local Tusker beer could be had for under 2 pounds a bottle, or you could risk the numbing effects of the local throat numbing and sedating drink of choice, Kava, for 50 pence a cup.

The rain continued to pour on each of the three days, soaking the crowd and the French film makers darting around trying to record the festival as part of a documentary on Pacific life. Reggae beats constantly vibrated around the park as families picnicked on the grass. The Rasta way of life has a strong following here, and special mention should be made of sets by ‘Smol Fyah’, ‘Young Life’ and a band from the Solomon Islands called ‘Solomon Group’ in the descriptive and helpful program. All played great songs to an increasingly appreciative crowd.

The highlight was ‘Hora Mona’ a band from the Northern island of Espiritu Santo with a Maori lead singer. Dressed in traditional clothes they played mainly Vanuatu custom (tribal) music. The bands percussion instruments were traditional slit log drums and they played with such enthusiasm that they kept breaking the drum sticks that were being used to create an echoing powerful sound. A conch shell was produced creating a noise not that dissimilar to wailing guitar feedback. The crowd stood amazed as the Maori singer did a ‘Hakka’ dance at the end of their set, complete with much shouting and violent rolling of the tongue. The response, in a typical shy Melanesian way, was small bouts of giggling along with a smattering of polite applause. 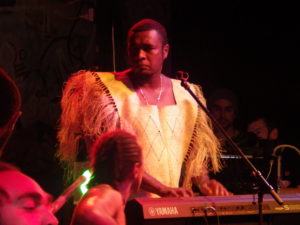 The festival was very well organised, as soon as a band finished a local dance troupe would come onto the platform in front of the stage and mime and dance to recent hits, while the next band set up. Despite the terrible weather it all went incredibly smoothly and the crowd melted away at just after midnight as the last act finished. The tiny nation of Vanuatu has won the title of ‘Happiest place on Earth’ twice in recent years and with festivals as good as this one you can see why.

All words by Simon Proudman. More from Simon on Louder Than War.