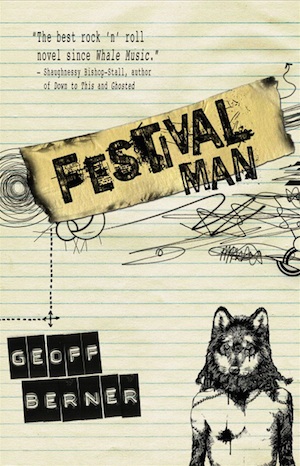 Geoff Berner’s debut novel Festival Man is crammed full of exceptionally witty stuff.  Elisabeth Robson has been a fan of the Whiskey Rabbi for years and has eagerly awaited this, his first written work.

Geoff Berner, the sardonic and hugely talented Canadian accordionist and poet’s debut novel, Festival Man, was a surprising read.  I expected a tale packed with wit, vivid musical anecdote, sleaze, substances and crusties, and I got it.  But what was unexpected was how the music industry, and more specifically the Canadian festival circuit, was portrayed with such absolute precision. Clearly this author has lived the life of a regular touring musician and has picked apart his personal sketches of the life; the politics, the characters, and how the whole operation is run the behind the Marshall stacks.

Festival Man is the story of the rather sad, but in many ways uplifting and always amusing life and career of Campbell Ouiniette – band manager, raconteur, self proclaimed music expert and bullshit artist. His story is told via the fictional discovery of his memoirs written on yellow legal pads. His bullshit is not merely for bullshitting’s sake, but makes up every fibre of his being: his survival technique – how to stay afloat and on top of the game amidst a sea of bigger and better bullshitters: specifically concert organisers, rival band managers and musicians themselves, all who might actually have their shit together. Cam Ouiniette has seen it all, knows them all and drank all their booze. He is nothing if not passionate, full of charm, wants to tell the story from his point of view and not as the loser his peers think he is. The reader finds himself  being pulled into the tangled web of Cam’s attempts of robbing Peter (usually by means of government arts grants) to pay Paul, in order to maintain his massive ego and need for success, and to get his band to the ‘big time’. This is depicted by Berner with the expert eye of someone who has certainly bought that t-shirt. Berner’s own name occasionally crops up in Ouinieete’s narrative as ‘that lying Jew’, a self-depreciating nod, but funnily he never actually explains why.

If you are a fan of music biography and documentary you will eat this novel up for breakfast. Geoff Berner manages to portray the scene like it is in a witty and inspired way, and for the music consumer he lets you peek into backstage relationships. One comes away feeling a quiet satisfied frustration. Ouiniette is the consummate anti-hero, but I can say no more. There is a twist to the story and I don’t want to give the game away. I can tell you that I didn’t want it to end.

The biggest gift that Geoff Berner has bestowed upon the reader is an exclusive downloadable digital album, which includes an array of wonderfully eclectic artists and bands covering the best of Berner’s work. The most notable contributors include Kaizers Orchestra from Norway and unique Canadian folk singer, Rae Spoon.

Geoff Berner will be playing 2 shows in London this coming week: