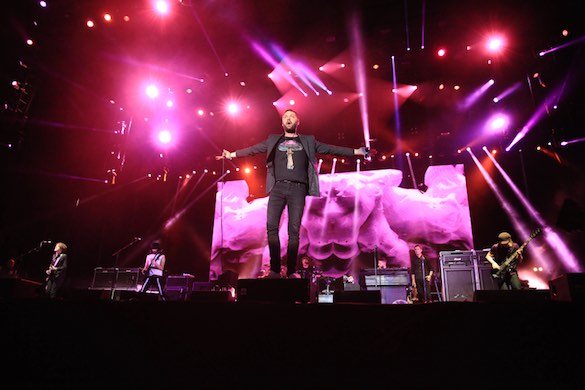 Photo of Kasabian above © Hayley Taylor

Sun, sand, amazing music and a tan in the shape of a vest – what more could you want? Stephen G Marsden soaks up all that Benicassim has to offer.

A lot of people are in love with going to festivals.  Even the ones who don’t really fancy it can see the appeal. Seeing bands you’ve loved for years and discovering bands you will love for years to come all while devouring the British landscape. But that rain. And that mud. For some people its too much to bear. Not even the privilege of being bitten by the same midges as Dolly Parton can draw some people out.

But there’s a nifty little solution for this muddy conundrum situated on the East coast of Spain: Festival International de Benicassim.

Every year the small town attracts 80,000 music lovers in search of sun, sangria and good music.  2014 was FIB’s 20th run out and in the past has boasted headliners such as Oasis, The Stone Roses, The Cure, Muse, The Arctic Monkeys and many more – add this to the gorgeous sunshine, relaxed atmosphere and great european beer and wine and you have a recipe for success.

As a British festival goer, one of the things I loved about FIB was the diversity available at such a small festival. Without this diversity I would have not discovered Mucho.

Mucho, based in the picturesque town of Toledo, Spain are a Psychedelic pop and rock band with a great energy. As one of the first bands to play the main stage on the Thursday night, I had no idea what to expect but their indie tinged Smiths-esque La Casa En Pied and Si, Quieres, No had the crowd of all nationalities singing back to them, dancing and getting into the spirit of the weekend ahead. The sun was going down and the crowd was ready to party well into the morning.

Because of the heat during the day in Benicassim, the festival kicks off at 6pm with the headliners playing at 1am. On Thursday night the headliner was the energetic and charismatic Tinie Tempah. Wearing an orange vest (just come from the beach perhaps) he played a set of his up-tempo hits. Songs like Pass Out, Wishing On A Star and Miami 2 Ibiza had the 30,000 strong crowd dancing, singing and twerking until the early hours of Friday. 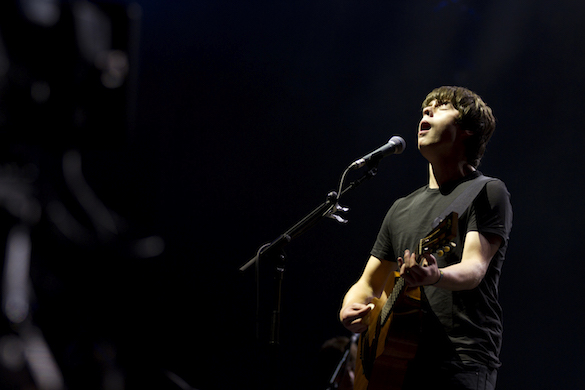 Another day of sun, beach and enough vest shaped tans to shake a stick at, it was time for Fridays line up. Although there was some confusion due to set timings being changed, I managed to catch Tom Odell and his piano based love songs. Tom Odell is relatively new to the mainstream music scene but despite that is an accomplished and passionate performer. As he sang Another Love and Grow Old With Me thousands of adoring fans sang back to him. As Odell came to the end of the set, the audience began to swell in anticipation for another young prodigy, Jake Bugg. Coming from the midlands, I’d heard much said about Jake Bugg and was intrigued to to see if his reputation matched his live performance.

As he came to the stage the crowd gave their most enthusiastic cheer of probably the whole festival. The energy gathered and the most amazing atmosphere came over the site. Starting his set with some of his more energetic songs he built it to a crescendo and then showed his musicianship with the ballad Broken as the sun set on Benicassim. Then as he launched into Lightning Bolt the crowd came alive for what was potentially one of the best reactions to a song I have ever heard. 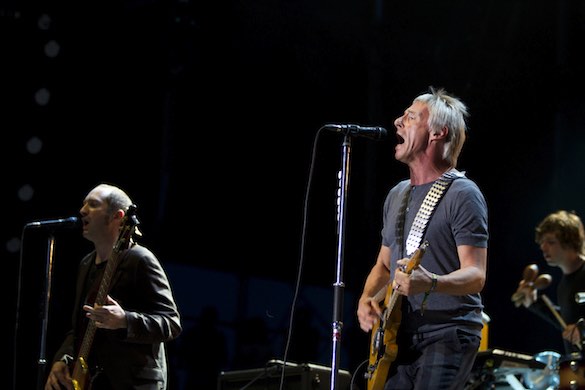 Next came one of the acts I was most excited about – Paul Weller. Ive followed Weller’s career since my Dad introduced me to The Jam and the Style Council. His last three albums 22 Dreams, Wake Up The Nation and Sonik Kicks’are all a testament to Weller’s songwriting and a great example of how an artist can grow and evolve as times change. His set included songs from all his incarnation s- audience sang along with hits like Sunflower and the introspective Wild Wood. 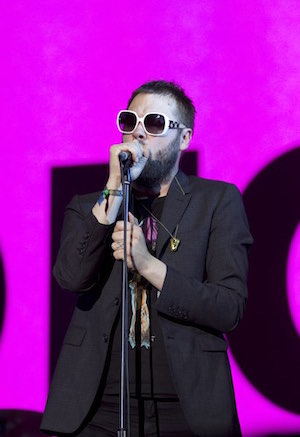 The headliner of the night was Kasabian. Fresh from their Glastonbury headline slot and their homecoming gig at Victoria Park in Leciester, Kasabian were (apologies for the pun) on fire. Kasabian achieved a great balance of playing songs from their new number 1 album 48.13 and playing classics. You could see exactly why they headlined Glastonbuy and the crowd was chanting the guitar line from Fire for a long time after the last chord was played.

Another day of sunbathing in factor 50 (my scottish ancestry means im awful at sun tanning but great at tossing a caber) and it was time for day three of the four day festival.

All the talk from the crowd tonight was around the Libertines reunion but I still wanted to see others before their headline slot. My tip from the weekend was a band named Telegram. Telegram are a london based indie quartet with a high energy sound. Their song Follow got the crowd on the Trident stage stomping their feet, nodding their head and dancing away in the still hot Spanish sun. With notable supporters including Toy and DJ Mark Riley, these guys will be one to watch for the future.

I made my way to the mainstage to get ready for the Libertines and found Lily Allen playing a great set. Fresh from her triumphant appearance at Latitude festival she played a mix of songs from her first two albums and the new Sheezus. Allen is an act I have never seen before and perhaps like many, dismissed on the grounds she is a pop artist; but one of the things that seeing her live has shown me is that she has a lyrical edginess to her as she sings about drugs and single motherhood. The audience lapped up her London swagger and gave her an enthusiastic and wild send off as she finished her set.

Up next was the main event for the night, the newly reformed Libertines. Last week their gig in Hyde Park was stopped a couple of times due to fans climbing the rigging and pushing too hard to get to the front. There was none of that in Benicassim. Carl Barat and Pete Doherty played a blinding set full of hits like Don’t Look Back Into The Sun and Can’t Stop Me Now with the energy and eagerness of a new band but the experience and skill of one that had been together for years. The audience loved it as much as this writer did, showing their appreciation by singing long after Pete, Carl, John and Gary left the stage.

I still fancied a bit more music and took the short trip past the food stalls (after grabbing some €5 cheesey chips) to the Trident stage to see Example. Example had drawn a massive crowd given that he was on the smaller stage and this only amplified the energy. He made the audience bounce for an hour and fifteen minutes playing his plethora of dance/rap hits including Kickstarts and Change The Way You Kissed Me. 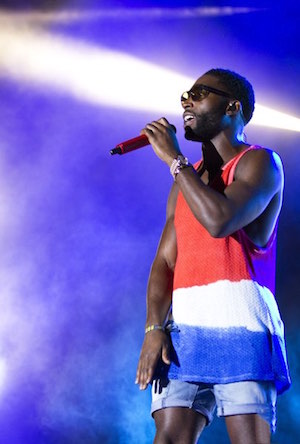 By Sunday I was in a definite and structured routine of beach, sun, nap, ice cream, nap, beer. All tinged with a little bit of sadness that this was the last night. It really did feel like a holiday.

The night kicked off with Kodaline playing the sun to thousands of their fans. A particular emotional point of their set was the beautiful All I Want. As they reached the climax of the song you could feel the emotion and atmosphere in the crowd – an amazing live act and definitely one to put on any playlists you have.

Another band I hadnt really heard of but was keen to check out is Hozier. Hozier (real name Andrew Hozier-byrne) is a singer songwriter from Bray, County Wicklow in Ireland. He wrote a song named Take Me To The Church protesting about the discrimination against homosexuals in Russia that had been taking place which subsequently went viral on youtube. His set was nothing short of amazing. his style, similar to Leonard Cohen and John Lee Hooker has a bluesy and soulful feel. Check out From Eden.

The headliner on Sunday night was the Scottish singer/songwriter Paulo Nutini. The crowd was full of young women, with a few very jealous boyfriends reluctantly holding their girlfriends on their shoulders. Paulo started with the soulful Funk My Life Up which got the crowd swaying in time with the bassline and beat of the kick drum. He went on to play songs from his previous albums including Alloway Grove, Pencil Full Of Lead and Candy. He was beckoned back on stage after his set for an encore of Last Request singing harmonies with the audience.

As the night was beginning to turn into morning there was just time to see one more band. Being an adopted Mancunian, it only made sense to see The Courteeners. Pushing my way to the front you could tell a lot of die hard fans were here to see Liam Fray and his band. Playing a mix of new songs and old the crowd went mental for Not Nineteen Forever. Dancing, singing and a moshpit saw the Spanish festival well and truly done.

I’d recommend the festival to any music lover who enjoys the sunshine. They have a great range of music at the festival and like every festival I attend I wish it was longer so I could see more. Every act had a glint in their eye while playing because of the carnival atmosphere of Festival International de Benicassim. Even some of the artists I’d previously written off put on amazing performances and I cant fault any of them.

The week had all the ingredients of a perfect holiday – sun, sand, amazing music and a tan in the shape of a vest.

All words by Stephen G Marsden. This is Stephen’s first piece for Louder Than War.

Images by Hayley Taylor. More work by Hayley can be found in her Louder Than War archive.