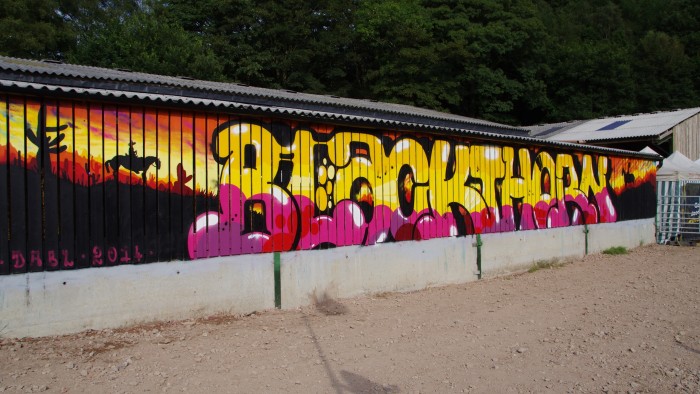 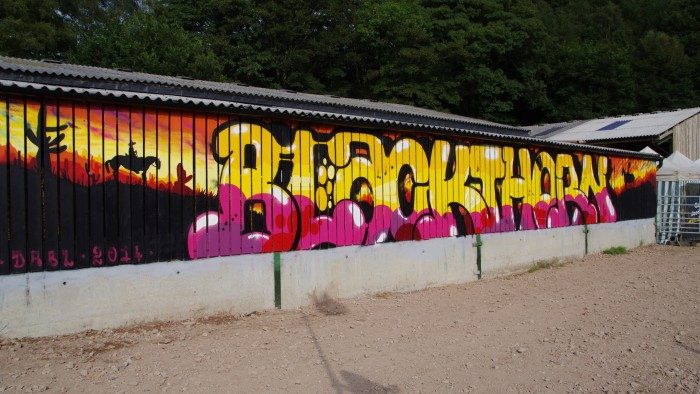 We return to Whitebottom Farm for the second day of Stockport’s Blackthorn Festival. Louder Than War’s Dave Beech reviews.

Staying at home proves a wise decision. Back on site by midday, fuelled by little more than and a gin and tonic and a ham sandwich, we look and feel a little less delicate than some of last night’s more ardent partiers. It’s obvious too though that many have opted to arrive today, with families, couples and bands turning up in a steady stream. 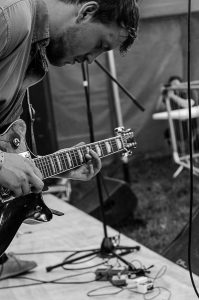 Arguably the strongest of stages this year is the Paddock Stage, a veritable who’s who of Manchester’s grassroots, presided over by the ever-present Mr Peeps, it was little exaggeration when people were overheard saying there wasn’t much point in moving anywhere else. Kicking off at 12:30 with Educated Risk, a young band who seem a little timid when on stage but show promise for their age, it might be a little too early for some of the crowd. Both here and over at the Meadow Stage for openers Plastic House there’s a distinct lack of an early crowd. Fortunately this is rectified once people have filled themselves with an ample amount of pizza and Prosecco, both of which seem to be in full flow by the time Kashmere take to the Paddock stage.

A Stockport-based four-piece and a rock band if ever there was one, Kashmere harbour all the sleaze and swagger that goes with the label, and though they may look the part, they’ve fortunately got the chops to back it up. An impressive mid-afternoon crowd fills the tent for a set which includes latest single Blow Your Mind and gets the afternoon off the ground for us properly.

A quick lunch break sees us wander over to the Meadow Stage to catch a little of Fly the Bird’s set, melodic and a little easier going than Kashmere, it’s a brief and welcome respite from the aural assault our ears have just taken. Back at the Paddock, Plastic House take the place of dropped-out Gas Panic, this time playing to an ever-growing crowd and really tearing the tent’s roof off. 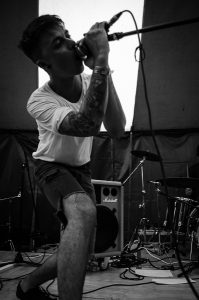 What proves to be one of the strongest sets of the day comes from a band who’ve only recently formed and for whom this only their second gig. Types rose from the ashes of former Manchester bands and emerged much more realised than the sum of their parts. Richly emotive and reverb heavy, there’s elements of ’80s post-punk and ’90s shoegaze to their sound but they don’t get bogged down in nostalgia. Instead, singer Adam Walsh pounds the stage with little more than a microphone; a backdrop of effortless guitar and drums providing the perfect accompaniment to his characteristic vocal delivery.

With little reason to head elsewhere and in fear of missing Ist Ist, we remain at the Paddock Stage for a beer and to ready ourselves for the impending chaos that promises to be their set. It doesn’t disappointed. Thunderous bass and drums provide a brooding and impactful backbone that stays steadfast throughout while an imposing baritone provides vocal depth and adds to the brooding atmosphere. There’s reason people are getting excited about this band.

A brief break and back to the Paddock to catch Larkins, one of Manchester’s brightest up and coming acts who pull in the biggest crowds of the day and give us arguably one of the most well received sets. Having already earned themselves favour with bloggers and fans alike thanks to their sleek and contemporary indie pop and incendiary live shows, tonight is no exception, with the band drawing in those on their way between stages to see what the fuss is about. They might not have headlined, but it’s only a matter of time. 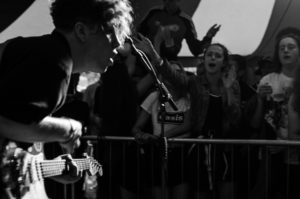 On the matter of headliners, a band who need little introduction on Louder Than War are alt-funk four-piece No Hot Ashes, who waste little time dropping banger after banger on a crowd who are almost begging for them. It’s a typically raucous set which takes the songs we’ve come to love and expect over the last few years such as Goose and Skank as well as tracks that aren’t as familiar for those of who haven’t seen them since last festival season. Once again a closing set that’s over all too soon, the Paddock shuts its doors for evening, sending the majority of the crowd over to the Meadow for Stella Grundy.

We instead bolt for the Main Stage to catch the tail end of New York Tourists whose emotive brand of alt-rock is as emphatic and as well received as ever, though from our position in between the two barns that make up the area does sound a little weaker than we’ve heard them previously. It’s something that unfortunately seems to dog Barron’s set as well; another band for whom festivals are taken in their stride and the crowd sits mainly in the palm of their hand.

With tired legs and tired heads we opt not to wait around for Stereo MC’s and instead make another educated decision to head for the car and the safety and sanity of our own beds. At least until tomorrow.