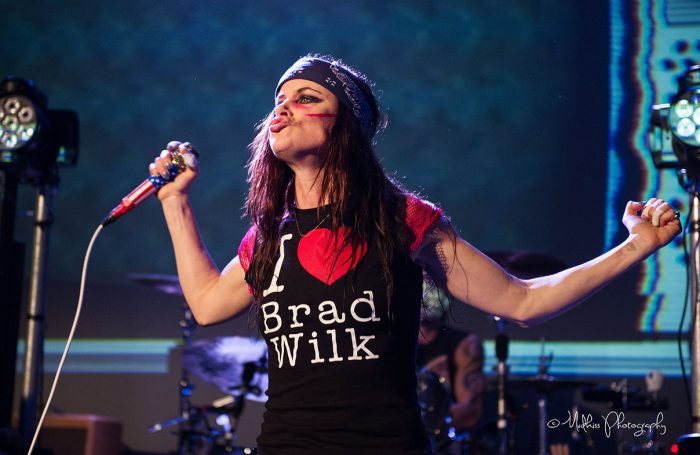 Louder Than War reviewer Davey Brett and photographer Melanie Smith feedback on their adventures at Festevol where Juliette And The Licks steal the show as bands and music fans flock to the edge of Liverpool’s Baltic Triangle for an all-nighter of impressive shows, with female-fronted bands showing the lads how it’s done.

Credit where credit’s due, the Festevol team deserve a pat on the back. Not only did they treat music fans to an impressive line-up across four unique stages – all within a minute’s walk of each other – but they also managed to put local talent at the forefront of a one-day festival bill that also boasted big names. All this, whilst still only charging fifteen quid a pop for an early-bird ticket (and allowing for a breezy door policy that allowed the more cash-strapped punter to smuggle a few tinny’s in to stay well-oiled throughout the day).

Perhaps the most understated move on their part however, was to provide a line-up full of female-fronted bands at a time when big festival bills are still dominated by the band patriarchy. This welcome move was no more evident than the absolute power-coup of enlisting headliner Juliette And The Licks, an achievement made only the more impressive by the fact that the night’s show was one of only a handful of British dates for the Oscar- nominated frontwoman. 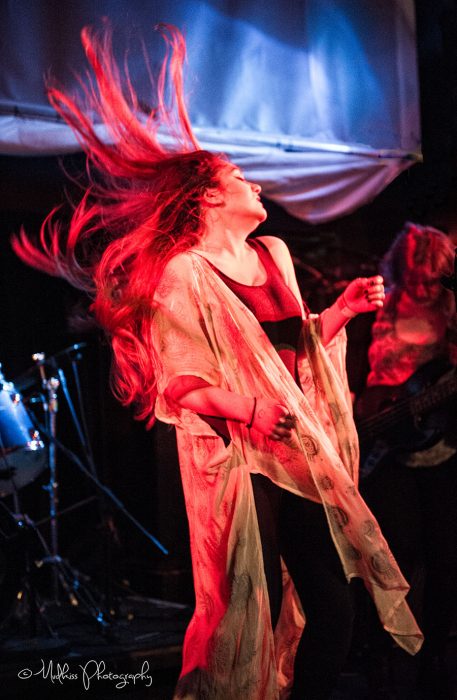 Kicking off the day’s trend of badass female-fronted bands was Indigo Moon on the District stage. The ragtag bunch tore through an eclectic and meaty set punctuated by Ashley Colley’s powerful vocals. ‘Running Circles’ and ‘A Cloud of Strange Events’ were set highlights, but the entire performance was an enjoyable watch, not least because the band looked like they were enjoying themselves but also because they really laid into the heavier parts of their songs, with the change of tempo on ‘Running Circles’ as a prime example of their music being launched out into the crowd.

Next up were Cardiff punk-rockers ESTRONS. Although the band’s set was slightly hampered by the cavernous and slightly empty space of the Furnace stage and its technical difficulties – Taliesyn Källström and her band ripped through regardless as if they were playing a sold- out 100 Club. New single ‘Drop’ was a screechy-vocal-laced belter worthy of its own moshpit whilst ‘Aliens’ was a more groove-based offering that still smacked of the ferocity the band are more than capable of. The infectious ‘Make A Man’ saw the set out with three minutes of frantic energy, cementing it as one of the must-see festival tracks this summer. 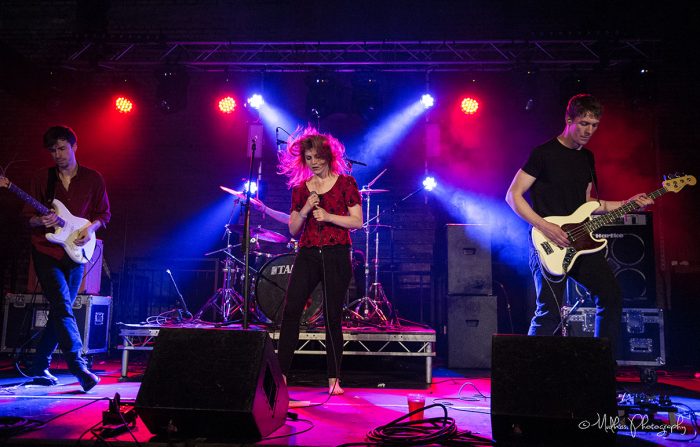 As far as the day’s performances went, Pumarosa were very difficult to beat. Playing the Camp stage and urging the crowd closer to the barrier, the band stormed through a layered and cinematic tour-de-force of a set, leaving the crowd looking at each other with dazed looks, as if seeking nodded confirmation that what they just witnessed was real. ‘Dragonfly’ kicked off proceedings, easing the crowd into the band’s huge and atmospheric sound, while ‘Cecile’ and ‘Honey’ showcased the band’s ability to craft a groove and make the most of a saxophone, before standout track ‘Lion’s Den’ knocked the crowd for six. Storming in on a grand atmospheric piano, ‘Lion’s Den’ sounded ridiculously vast, as if it were written to soundtrack a Christopher Nolan film trailer, a huge soundscape of a tune for frontwoman Isabel Munoz-Newsome to twist her body around at the front of the stage. ‘Priestess’ closed the set with its slow-building and euphoric groove, interspersed with saxophone and Munoz-Newsome’s incredible voice. It was enough to leave you walking away from the stage with goosebumps and you’ll no doubt be hearing more of them over the summer. 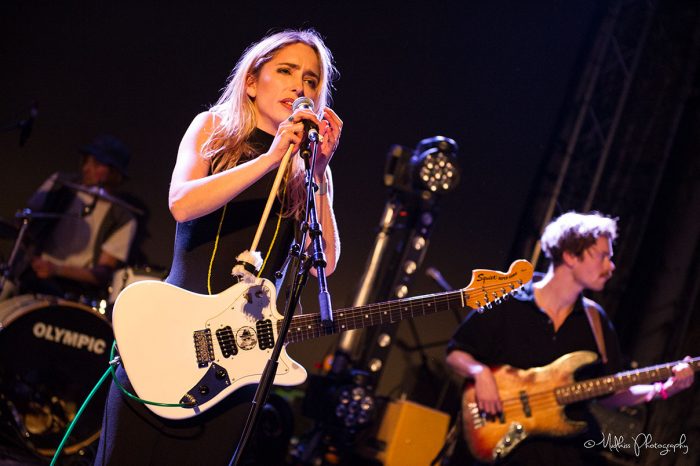 Back to the Furnace stage and The Orielles were playing out the final few songs of their set. For such a beautifully whimsical band on record, the band really tore it up live with a surprisingly heavier sound. The Furnace’s sound problems persisted, but the Liverpool band still provided an impressive set with ‘Joey Says We’ve Got It’ the highlight.

Fast-forward a few hours and it was time for Black Honey. ‘Corrine’ was one of the best songs of the day, with its sparse intro and swooning chorus. Set opener ‘Spinning Wheel’ and ‘All My Pride’ sound great, whilst ‘Teenager’ warranted the regular comparisons to Lana Del Rey. One of the reasons Black Honey are such an exciting band live is because of their ability to contrast the smoothness of frontwoman Izzy B’s tones and the laid-back tunes with her other more fraught and energetic moments. A perfect mixture that can see her crooning one moment, then standing on the barrier the next, belting out a tune to the crowd. The band definitely made the most of their set. 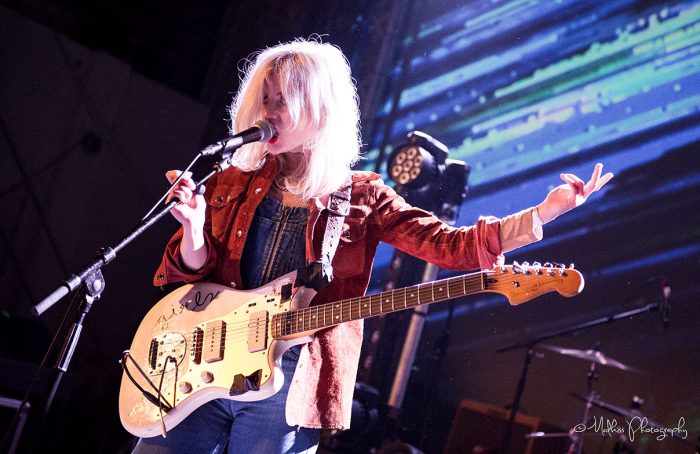 By the time Juliette and the Licks made it on stage, the Camp was at full-capacity, same as the photographer’s pit and the balcony. The room was awash with excitement, as well as intrigue. Juliette did not disappoint. Arriving on stage, in ferocious red leather boots and an ‘I love Brad Wilk’ t-shirt, Juliette and her licks were electric from start to finish. Old and new tracks made the cut, with the energetic frontwoman strutting around the stage, dancing with bandmates in a non-stop and frantic manner, mic cord whipped around the stage, but never tangled. The set was a mesmerising watch, with every second lapped up by a crowd packed in cheek to cheek. The fact that the set was such a rare appearance made it feel even more special. 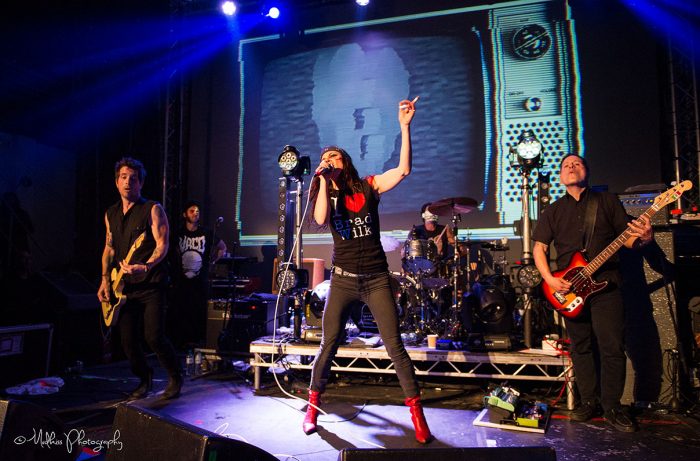 The lads did well too by the way. Wigan’s TVAM is an interesting project, with an arse-rattling array of textures that sound huge live and Cupids were surprisingly impressive. Blossoms rise becomes immediately understandable upon seeing their set and explains the huge roll-call of summer appearances.

However, Festevol was an event that saw the girls leading the way.

Check out the Photo gallery:

All words by Davey Brett, more writing by Davey on Louder Than War can found at his author’s archive

Photos by Melanie Smith. More work by Mel on Louder Than War can be found at her author’s archive. You can find her on Facebook and Twitter. Photography portfolio can be found here: mudkissphotography.co.uk