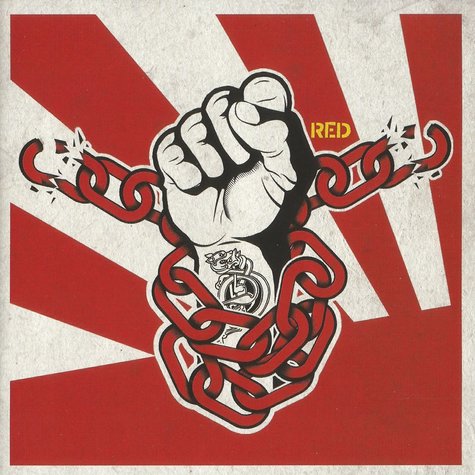 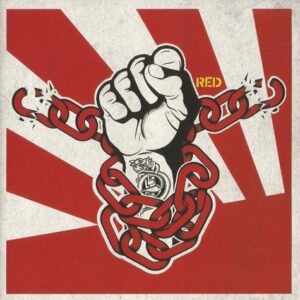 Self released, under total band control and stocked in the Louder Than War shop along with the rest of the FD catalogue, the third album from the, erm, ferocious celtic folk punksters carries their message onwards and upwards.

Proudly displaying a tagline from US magazine Shite’n’Onions that calls them “As authentic as feck”, the Red album is exactly what it says on the tin – the colour of danger, a warning, take care, beware;  no holds barred, no prisoners taken, no punches pulled and to lift from  the Ferocious blog – “no red herring.”

The induction of new members, multi-instrumentalist John Leonard  and drummer Alex Smith don’t in any way lessen the familiar hectic vibrancy. Building on the opening volley of a trio that lyrically announces Red with the standard diet of empty promises, slavery and lies, Black Leg Miner then takes a step forward and gets  covered with a series of breakneck fiddle and banjo breaks.

The Ferocious Underdog attitude underlies Together We Are Strong – simple bare bones seventy seven punk bar the pogoing and gobbing, which might have been particularly out of place in the gentle string driven middle section. In fact, it’s where the tried and trusted takes a back seat in A & B whose more sombre subject of Birkenau concentration camp takes a more simple but most effective path – proof that for all the bluff and bluster and the marching beat in The Enemy Within that follows, the picked tumble and roll of guitar notes and a lamenting fiddle  do the job

Seven minutes of the slow reggae jive Class War inevitably gets an injection of vitality as the Dog continue their relentless pursuit – the occasional reflective moments soon giving way to frantic gypsy fiddling punky thrashes. It’s the veritable  same picture in a new frame although critics may launch accusations of predictability as one song merges into another in a one dimensional medley.

What’s for sure is that Red proves an outlet for a bit of a rage and rant and although it may test your patience,  you wouldn’t want to argue.

You can watch American Dream from the album (starring he who must not be named) here: