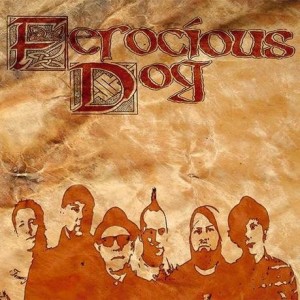 If you judge a band on the t-shirts they wear, Ferocious Dog are right up there – Roughneck Riot, Slaves and New Model Army shirts were all on show, demonstrating some of the band’s influences and giving newcomers a clue as to what to expect from an evening with Ferocious Dog.

Over the last few years, Ferocious Dog have built up a solid loyal following and they were here tonight in Manchester’s Ruby Lounge. Bare chests, tattoos, a bouyant pit and maximum crowd participation by fans who knew every word to every tune made me think of many a New Model Army gig. It wasn’t the biggest ever turnout at the city centre venue, but it was definitely one of the most devoted, one of the most energetic.

Frontman Ken Bonsall plays a great part – sporting the best Mohican haircut I’ve seen in many years, he leads the band and lifts the crowd in a way which creates one of the most fun-filled gigs I’ve been to in a long time. They clearly enjoy themselves on stage and that filters down into the pit and on to the dance floor.

At the same time, there’s a serious and emotional aspect to Ferocious Dog which relates to the tragic loss of Lee Bonsall and the issues surrounding PTSD. Take a look at “Panorama – Broken by Battle” on YouTube for the full background.

This was actually my first time at a Ferocious Dog gig, but it won’t be the last. You can catch them at their very own Festival in Warsop on December 6th – DOGFEST – where they’ll be joined by the likes of Mark Chadwick, Rev Hammer, Gaz Brookfield, Roughneck Riot and Attilla the Stockbroker. An impressive line-up and testament to the respect they’ve earned themselves.

If the Hell Hounds come to your town, be there.