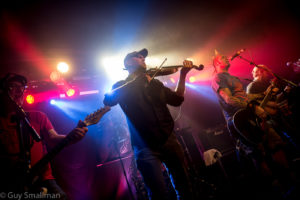 What a difference 120 miles can make.

Not long ago Ferocious Dog became the first underground band to completely ram 2,500 capacity Nottingham Rock City. On this outing they’ve sold out 3 nights at the more intimate Nottingham Rescue Rooms along with most of their other shows. It is their biggest tour to date. Yet here in the big smoke the modestly sized Garage is very busy, yet not quite the sweat box that we’re used to north of Watford.

Not that their lack of profile in these parts had dampened the spirits of their fanatical travelling (and local) ‘hell hounds’. Jay and Lee from Newcastle gleefully tell me how they’ve endured a 6-hour Megabus to be here. The place is buzzing.

Backstage Ken Bonsall is overflowing with praise for the band’s new additions. 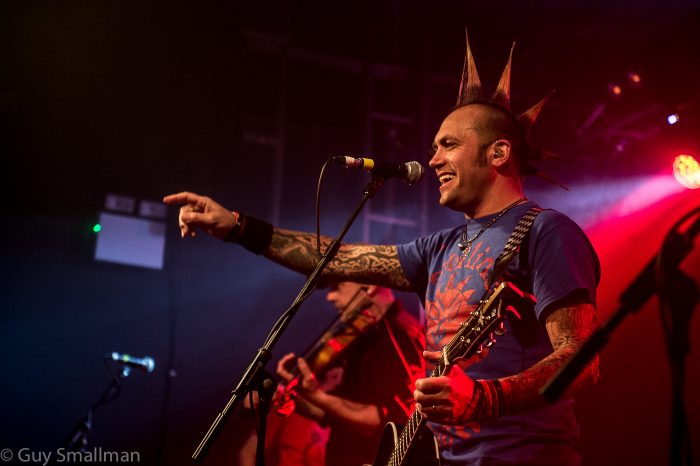 “This tour has been absolutely amazing. These two (John & Alex) joined just two weeks before we started. You’d expect to take two steps back when your introducing new musicians but with these two its been two steps forward. The energy they’ve brought to the live show is just fantastic and they are here in time to be recording on the next album.”

A few minutes later the band are opening their set with ‘Gallows Justice’ and it is clear that the mohicaned ex miner was not exaggerating about the ability of the new members.

John Leonard is playing the intricate folk melodies on his various stringed instruments with commendable ease & precision. Meanwhile the drums are being expertly punished by Alex Smith.  At just 21 he wasn’t even born until many years after this band first started in 1988.

The show has indeed moved up a level since we last saw them supporting the Levellers at Brixton Academy last year. The solid bass of John Alexander completes the rhythm section leaving Ken’s vocals & Dan Booth’s fiddle to lead the charge with Fruitbat (aka one half of Carter USM) completing the line up on guitar. Live experiences don’t get much better and they have the songs to go with it.

We get nearly 20 tunes tonight, which range from the energetic madness of ‘Hell Hounds’ to the melancholy dub-ska of ‘Freeborn John’. Other highlights include ‘Ruby Bridges’ a tale of superhuman bravery in the face of institutional racism and ‘Crime & punishment’, which remembers the unfortunate souls, transported to Australia from an unforgiving Victorian England. While very many bands have written many well-meaning ballads about the 84-5 Miners Strike, Ken Bonsall actually lived through it and songs like ‘Criminal Justice’ and ‘Slow Motion Suicide’ (which closes the set) have an incredible poignancy, which other artists don’t quite achieve. 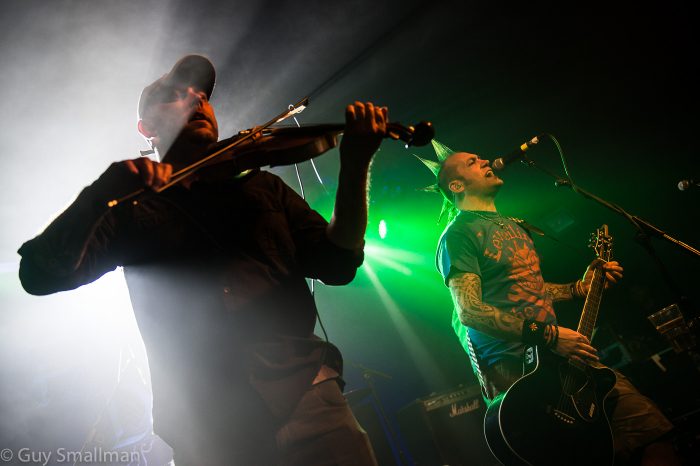 As always Ken graciously thanks his crew and plugs the work of the Sea Shepherd eco warriors whom have a stall here. Also the local food bank who’ll be going home with boxes of supplies as the band’s loyal following continue to empty their kitchen cupboards on request.

For each date of the tour local charities helping the skint & homeless have benefited from a now established practice of nightly donations from fans that like the band themselves do more than just talk the talk. Ken was full of praise earlier for ‘I Daniel Blake’ but his band were taking practical steps to address poverty and social injustice long before Mr Loache’s masterpiece hit the silver screen.

Politics aside, their cover of ‘Raggle taggle gypsy’ has to one of the best versions of the ancient folk ballad and ‘Lee’s tune’ continues to put the ‘mental’ in instrumental. It is actually quite impossible not to dance to this lot.

With a new album in the pipeline and a live show that just keeps going from strength to strength this is a band that everyone must see before they die. Hopefully my fellow Londoners will soon discover what they are missing.