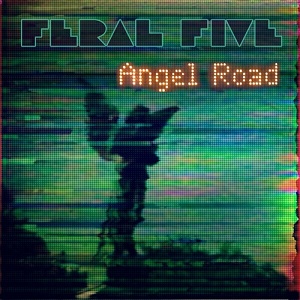 “Where are these angels to put the world right? Here they are. This is it”. It’s been a quite year for Feral Five. Two singles which created media whirlwinds including one which created media frenzy with its references to the world of 3D printing. Now Kat and Drew are back with their cinematic take on the question of existence.

Three mixes are available with the Radio Edit kicking off the hat trick. A killer bassline from the start is compelling and strong making your speakers and eardrums throb with a little volume. Synth echoes and trails spin around an apocalyptic soundscape and Kat’s vocals sound better than ever. The chorus and melody are instantly memorable providing possibly the duo’s most effective single release to date. Add a monster guitar gnarl at the end of the song and it’s the perfect soundtrack for Xmas Day.

The Dusk Til Dawn remix begins with a more operatic approach and slowly introduces sliding and spinning tones which tease the stereo facility before shuffling percussion and semi Xmas shimmers before the chorus enters. ‘Angel Road is littered with broken wings…..shattered with broken dreams’ – have the angels transformed into people? Maybe only the Ferals know the answer with a little help from guest speaker Robert Fripp.

Tim Elsenburg of Sweet Billy Pilgrim provides the final mix which concentrates more on Kat’s vocals and layered reproductions of her voice. The instrumentation is subtle and understated over the bass which continues to pulsate beside additional percussive beats. There’s a final kick as the mix ends which rolls to a very satisfying conclusion.

Feral Five continue to release their very special brand of alternative electro pop and Angel Road and the world is a better place for it. The cats are back in town.