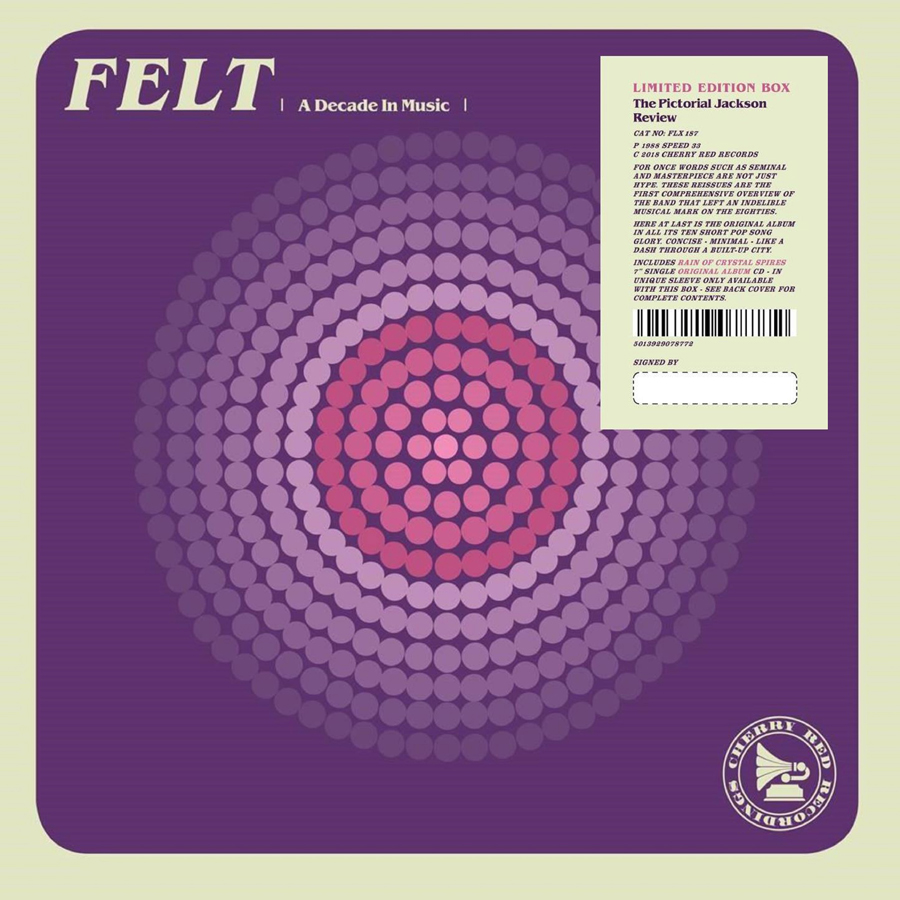 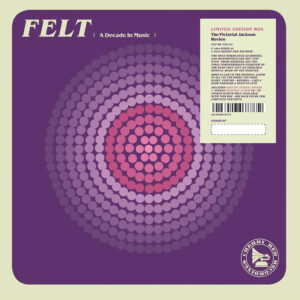 Reissue of Felt’s eighth album, restored to what was its intended form, with the tracks Tuesday’s Secret and Jewels Are Set In Crowns, which were pulled in favour of Martin Duffy’s instrumentals Sending Lady Load and Darkest Ending just prior to release in 1988, now reinstated. LTW’s Ian Canty ponders the benefits of hindsight and pitfalls of changing the “classic” form….

My this is a tricky state of affairs. Amending an album’s running order and substituting tracks is always going to be problematic for fans. The album that you associate with good or bad times in your life, a vinyl friend you could always pull out of its sleeve and count on, now sounding not quite the same. Even if in this case, it seems to be more a case of reinstating the original “short album full of short songs” that was Lawrence’s vision of the time, it’s bound to be a little on the thorny side for some (Bitter End and the very “Bob Dylan meets Lou Reed in the Midlands” How Spook Got Her Man have also swapped positions in addition).

The 2018 version of the Pictorial Jackson Review is also a fair bit shorter than the original record, coming in at around the 25 minute mark. Martin Duffy’s now missing keyboard tracks, which originally made up the entire side two of the album, clocked in at just over a quarter of an hour. The “new” songs, Tuesday’s Secret and Jewels Are Set In Crowns barely scrape past five minutes altogether, despite their obvious charm. Not that running times ever bothered Felt at any stage, albums were as long as they should be in their world, but now with the meditative side two missing, it represents a vast change in structure. Sonically these substitute songs fit in almost perfectly, though Tuesday’s Secret does have a mildly different, less keyboard focussed sound. Having said that, it is not jarringly dissimilar though and if someone hadn’t previously heard the album they would be hard pressed to point out where the alterations occurred, or in Eric Morecombe’s words, “you can’t see the join”.

The album maintains an even momentum all the way through now, not exactly at breakneck pace, but still skittering by with barely time for one to draw breath. Denied the reflective and elegant Jazz piano comedown of Sending Lady Load and the more sombre Darkest Ending, the LP now a very different fish indeed (perhaps side two on the LP as it was sounded like it could be by a different artist entirely, but that may have been part of its appeal). This tends to bring the Dylan influence present into a sharper focus, apparently Nashville Skyline was a template for this album (along with Friends by the Beach Boys) and it does show a bit. The singular talent of Lawrence and his band are in fine form though and you are never in any doubt this is the work of Felt. The Pictorial Jackson Review still has a great deal to recommend, even if it is not quite the same as it once was.

What we are left with here is more in the tradition of Forever Breathes The Lonely Word, not that there’s anything wrong with that, but it is a big change. Even so each piece is intricately put together, with Duffy’s warm keys joined by some excellent guitar playing (on the racing Christopher Street the fretwork on display is delicious) and an always tasteful rhythm section. Jewels Set in Crowns has I feel a little of a 1978 Elvis Costello sound, which makes sense as at this stage Lawrence could have been his 80s equivalent, an acidly observant eye just at the corner of the action. On the lurching, mid-paced delight Until The Fools Get Wise in just a few stanzas he states what could possibly be his manifesto “I see through your disguise, I won’t ever compromise”. He never did either.

Bitter End has a slight Faces feel, Duffy’s work on this recall the wonderful Ian McLagan in his prime. The lyric features another typical heartbreaker in “the world never could be mine”, the bitter tinge is never far away, but that is often negated by Lawrence’s nonchalant cool. The slow/fast Under A Pale Light now becomes pivotal and Don’t Die On My Doorstep is archetypal Felt, with Lawrence at one turn cruel (“Can’t you crawl to another town”), the next more conciliatory (“still want to hear your point of view”), effortlessly pinpointing the contradictions we tend to live our lives by. Economically stated as always and of a snappy musical build, it provides a fine end-piece to the reconstituted album.

It occurred to me that given the format that these reissues are presented in, the perfect way to solve this conundrum was in plain sight. Though it is nice to have the Rain Of Crystal Spires/I Will Die With My Head In Flames single, perhaps the two previously unreleased recordings could have been provided on the 7″ instead, leaving the album intact? Just a thought. It is a shame that both versions can’t be represented, but I will bow to the artists’ vision on this one. Again this disc is accompanied by various paraphernalia, which are okay as stated in the Forever Breathes A Lonely Word Review (you can read that here), but again the price tag again may prevent folk picking up on what is an excellent album, despite the rejigging.

I know that some fans will never accept an artist tinkering with a record and I fully respect that. A song, or set of songs, can mean a different things to different people and be tied up with the time you first heard it, what it meant to you, who you were with, how it made you think and feel. It is entirely understandable that a substantial change would be received suspiciously. But if we can see past these concerns for a moment and I feel I should whisper this bit, it might even make a little more sense in this form. Even if you don’t agree with that, this “new” version of The Pictorial Jackson Review is a fine record and shows that Felt were both remarkable and remarkably consistent too.