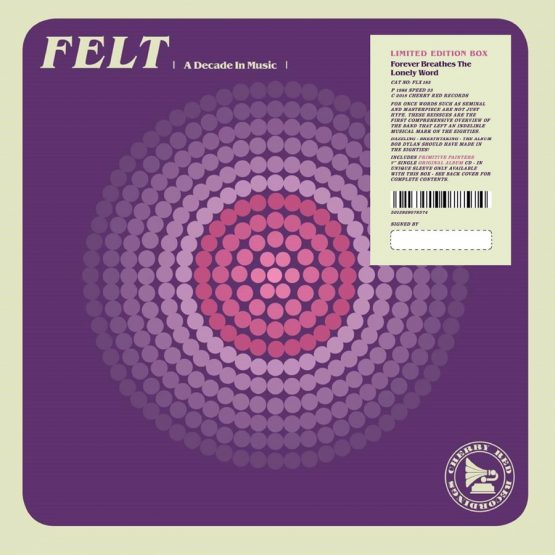 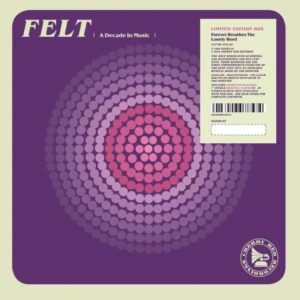 Part of the Felt reissue campaign’s second phase, which includes Poem Of The River, The Pictorial Jackson Review, Train Above The City and Me And A Monkey On The Moon as well as this one, recorded for Creation in 1986….Ian Canty feels a deep autumnal hue and thrills and spills along the river bank….

I suppose you could say that Forever Breathes The Lonely Word was Felt’s first “proper” album for Creation after the short, sweet and totally instrumental Let the Snakes Crinkle Their Heads To Death. But nothing is quite as simple as it might seem in Felt-world and everything belongs and makes sense whatever the duration or style. One thing is for sure though: this LP was one where Felt sounded totally relaxed and on great, ebullient form, with Martin Duffy’s organ taking things in a different but equally pleasurable direction to Maurice Deebank’s flights of guitar dexterity. Lawrence had come up with some amazing songs, the production is full and clear and I can only conclude that Forever Breathes…. is possibly the apex of Felt “Mark Two”.

Despite clocking in at a concise 31 minutes 45 seconds, this album has it all. It’s the perfect Felt statement, full of style and low-key passion, warm tones to the sound bringing out the best in the elegantly mysterious songs. There is a definite feeling that everything fits just right, pacing the songs perfectly. The LP starts off at a cracking rate on Rain Of Crystal Spires and has an irrepressible drive all the way through, even at reflective moments (for example the languid and spellbinding A Wave On the Rocks) keeping things snappy. It’s beautiful, louche, ecstatic and sad, all in one hit. Lawrence really is on top form and his bandmates perform the tunes flawlessly. Forever Breathes….. really is a work of perfection.

Someone at the time apparently said it was the album Bob Dylan should have released in the 80s, but the only real things it has in common with Robert Z I can see is the ability to capture images in just a few words and skewering those deserving it with a calm but chilling accuracy. Here Lawrence hits all his targets with a panache few could match. He conjures moods and scenarios out of the air and right into the ear of the listener, gifting a view of a master at work, but maintaining the mystery that was always a big part of Felt’s charm.

I could leave it at that, but there is more detail to be drawn out. Lyrically we get hints of the frustrations the band and Lawrence in particular had been feeling, including that Felt were perhaps not getting their just desserts while far lesser talents made it big. We have to bear in mind that the C86 scene was gaining traction at the time this LP first emerged, sometimes that was wonderful, but it also gave a home to a good few bands doing a similar thing to Felt with none of the richness that was to be found here. The scathing All The People I Like Are Those That Are Dead is the most obvious pointer beginning with the memorable line “Maybe I should entertain the very fact that I’m insane” and later “I should take a gun and put it to the head of everyone”.

Elsewhere momentarily more positive ideas are offered “It’s totally magic what we’ve been through” on A Wave Crashed The Rocks, before being dashed with a typical downcast Lawrence flourish that “you in your wisdom you ruined it all”. But even though the lyrics are sometimes acidic, often heart-breaking and always wryly observed and skilfully deployed, they are wrapped around the most irresistible tunes imaginable. September Lady feels like the perfect point where VU meets the Beach Boys, great harmony vocals, lovely Hammond touches (the keys on Gather Up All Your Wings And Fly are truly beautiful too) and of course Lawrence being himself that takes things away from those influences and onto a different plane of their very own (the song juxtaposes these lovely sounds with an abstract portrait of a dying relationship).

Listening to this LP on the last day of September, it feels perfectly in tune with the time, with a pastoral hue running through the music. The seasons are referenced during some of the songs and the music has the kind of rush of the last days of Summer and the feel of an Autumnal change in the air. Just over halfway through the “10 albums in 10 years” Felt were set up to accomplish, they’ve learnt hard lessons and emerged tougher. Perhaps Down But Not Yet Out sums Felt up – despite the endless knock backs and pain, they were not going to be beaten – a bit bruised maybe, but the wiser.

I know that this raft of releases have put the cat among the pigeons so to speak with the fans of the band, with regard to re-jigged track-lists, the generic packaging and above all the price tag – it makes more sense to discuss these reservations in the piece about The Pictorial Jackson Review, which is one subjected to the tinkering which I know is some people’s bugbear. But I will say that it is nice to see Forever Breathes The Lonely Word out again whatever the trimmings, because anything that draws attention to one of the neglected greats of UK music is a good thing I think.

As is uniform across these Felt reissues, this one comes in a 7″ inch box complete with the classic single and sole Indie number 1 Primitive Painters/Cathedral, along with a set of badges and other bits and pieces. I’ll certainly be donning the “Lawrence Is Felt” badge at some point in the future! The other stuff is ok, but lets face it the album itself is what you want to hear and perhaps could have been released separately too and a little cheaper without the adornments, nice as they are. Seems a shame people might miss out on hearing a truly great work because of the cost.

Forever Breathes The Lonely Word is still as fresh, urgent and fascinating as one could wish for – pulling off the difficult trick of being both enigmatic and accessible. Felt have been no more for 28 years, but they have never sounded more alive. This was consummate evidence that Felt could survive and thrive without the maestro Maurice Deebank. One of the 80s best kept secrets is ready to reveal its splendour for you right here.