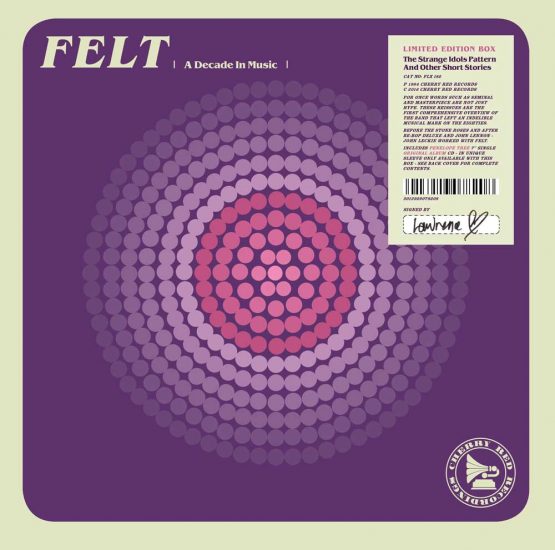 A Decade in Music – Their First Five Albums

New reissues of the first five Felt albums, with an accompanying vinyl single apiece and various associated ephemera …….LTW’s Ian Canty looks at the first half of the long playing career of these Indie legends…..

If the reception to the excellent Mozart’s Mini Mart album is anything to go by (reviewed here), 2018 could indeed be Lawrence’s year. As well as this cracking addition to his catalogue, new reissues of his initial aggregation Felt’s first five albums are now available, in CD form with an accompanying vinyl single each. They were one of the main bands that defined the early sound of Cherry Red Records and UK “independent” music in general, developing a mystique about them which set them apart from most others. They kept it that way too, from the word go, right up to when they signed off ten years later with Me And A Monkey On The Moon in 1989.

The 1979 debut single Index was a raw blast of guitar noise with some unintelligible vocals, solely the work of Lawrence. It wasn’t until 1980 that Felt actually became a “band” in truth, but the stars must have been aligned when it eventually happened, because Maurice Deebank and his ingenious guitar skills came in. It was no doubt a rocky union, but yielded some gold. By the time of the first of the five LPs we are looking at here Crumbling The Antiseptic Beauty, they were joined by Gary Ainge on cymbal-free drums and bass player Nick Grant.

Both the first two Felt LPs only featured 6 tracks and this coupled with a running time of around 30 minutes set out their stall in an assertive way – these records lasted as long as they did because it made sense in the band’s internal logic – everything fit together. If you were confused about whether it was a mini-LP, long EP or an album you were slightly missing the point.

Crumbling The Antiseptic Beauty commences with the fluid instrumental Evergreen Dazed, an excellent introduction, dream-like and glistening. Fortune, part of which was later reused on the Sunlight Bathed The Golden Glow single, is Lou Reed relocated to early 80s Brum, with Ainge’s tom tom pitter patter juxtaposed perfectly with the lovely mournful guitar jangle. Perhaps Cathedral is one of the first Felt classics, with Lawrence intoning “When the choice is mine I hope I make it” – which could be Felt’s manifesto at the time in short form. The vinyl offering with this one has two versions of their brilliant 1981 single Something Sends Me To Sleep, replicating their second 7″ release.

It would be a whole two years before Felt returned with the follow up The Splendour of Fear (the intervening period only yielded the My Face Is On Fire and Penelope Tree singles, the former of which included here with Trails of Colour Dissolve on the flip and the latter is appended to the new version of Ignite The Seven Cannons, which we will look at below), another 6 track LP with only two selections featuring vocals. This helped the band keep a sense of mystery about them, slowly revealing their activities and obsessions, never over-cooking anything. Restraint and fastidiousness as part of the attitude. With Mick Lloyd taking over from Nick Grant on bass, The Splendour Of Fear was very much in the same line as the debut (it also came dressed in that memorable “Chelsea Girls” sleeve). Deebank’s sorrowful, ringing guitar dominates Red Indians and the pleasantly lilting A Preacher In New England.

Of the two tracks that have words (and even on these ones, lyrics are used sparingly), The World Is As Soft As Lace has beautiful emotion and the line “And all my great plans get blurred, by the softest touch, the gentlest word” is the fragility of the writer laid bare. The Stagnant Pool is an 8 minute plus tour de force of Gothic symbolism and subtle musical shapes, imaginative and bright.

Arriving later on in the same year, The Strange Idols Pattern and Other Short Stories featured 10 selections but a shorter running time. Changes were afoot within the band’s sound as well, as Gary Ainge now operated a more traditional drum kit and the band on the whole sounded more bullish (for Felt anyway) and purposeful. Whirlpool Vision Of Shame plays around with the same themes as the My Face Is On Fire single in a fresh and winning way and Crystal Ball has a lovely, flowing guitar line. Sunlight Bathed In The Golden Glow possesses the exciting rush of early Subway Sect and the brief Imprint is an instrumental gem. Strange Idols is a cracking album, one of Felt’s best and comes complete with the Mexican Bandits single.

By the time of fourth LP, Ignite The Seven Cannons, Felt had become a fixture on the Independent Charts and seemed on the edge of crossing over into the mainstream. The album was produced by Robin Guthrie of the Cocteau Twins and their singer Elizabeth Fraser’s gorgeous, weightless voice features on the Primitive Painters single, absolutely stunning and a much-deserved Indie chart-topper. The link up between Felt and the Cocteaus seemed a marriage made in heaven, but Lawrence was never happy with the vocal mix on the record. It has been remixed here and has a sharper sound.

Putting aside any misgivings about the production, Ignite The Seven Cannons is a masterful piece of work and an able follow up to Strange Idols. Further line up changes occurred with Marco Thomas coming in for Lloyd and keyboardist Martin Duffy being added. Duffy’s impact gave the band another aspect and he was to become an import part in the development of Felt slightly away from the “guitar band” pack.

Aside from the great Primitive Painters single, The Day The Rain Came Down sparkles, it is simply brilliant Pop Music and the slow, finely coiled energy of Black Ship In The Harbour, complete with soaring backing vocals and a carefully picked out guitar line, seduced this listener totally. My Darkest Light Will Shine benefits from Duffy’s warm, summery keys, which turns some people’s view of Felt as Moz type misery merchants on its head – this is joyful, using a bit of the Velvets’ Sweet Jane as a template to create a super, strident groove. N.B. Serpent Shade, which was on the original album, is not included on this reissue.

It is a little odd that first “LP-sized” fruit from Felt after the exit of the talented Mr Deebank was a totally instrumental record. The Seventeenth Century AKA Let the Snakes Crinkle Their Heads to Death, may be an anomaly in Felt’s catalogue, but it is enjoyably diverting nonetheless. In Deebank’s absence, the keyboard interjections of Martin Duffy come towards the centre stage, with Lawrence handling all guitar duties.

Album opener Song For William S Harvey is delightfully light and carefree and Duffy’s Hammond gives it a Soul tinge, with guitar glinting atop. Some of the tracks mine Easy Listening and Library Music, pre-dating the craze for such things that was still about 15 years off, with the strum and bongo feel of Indian Scriptures being the best example. The jaunty Jewel Sky also is in this mode, like the instrumental theme to a forgotten film’s 60s party scene. Sunlight Bathed The Golden Glow is the single attached to this final offering (for now – the final five Felt LPs are due out soon).

These new reissues sound bright and clear and come with reproductions of gig flyers, posters and badges. Although the extras included aren’t legion, they are relevant to each album. These updated editions are aimed squarely at the Felt collector/obsessive – people new to the band would be better served by trying either Ignite The Seven Cannons Or Strange Idols, rather than diving straight in to all of this.

Felt at this stage in their life cycle were complex, different, suave and strange. Around the time of the fourth LP Ignite The Seven Cannons they stood on the verge of success, with only bad luck and the lack of radio patronage possibly holding them back. What may have looked to the outside observer to be the occasional self-destructive impulse, was really just their own inscrutable reasoning, even if it was counter-productive.

Anyway, more importantly there’s some fine and original music contained on these records, each one displaying Felt’s own unique attitudes about the way they would sound and the feelings and ideas their lyrics would depict. Everything fits perfectly. Felt produced a singular body of work through the decade they were functional in and created some total masterworks that few could equal, let alone top. There was nothing else like them really.