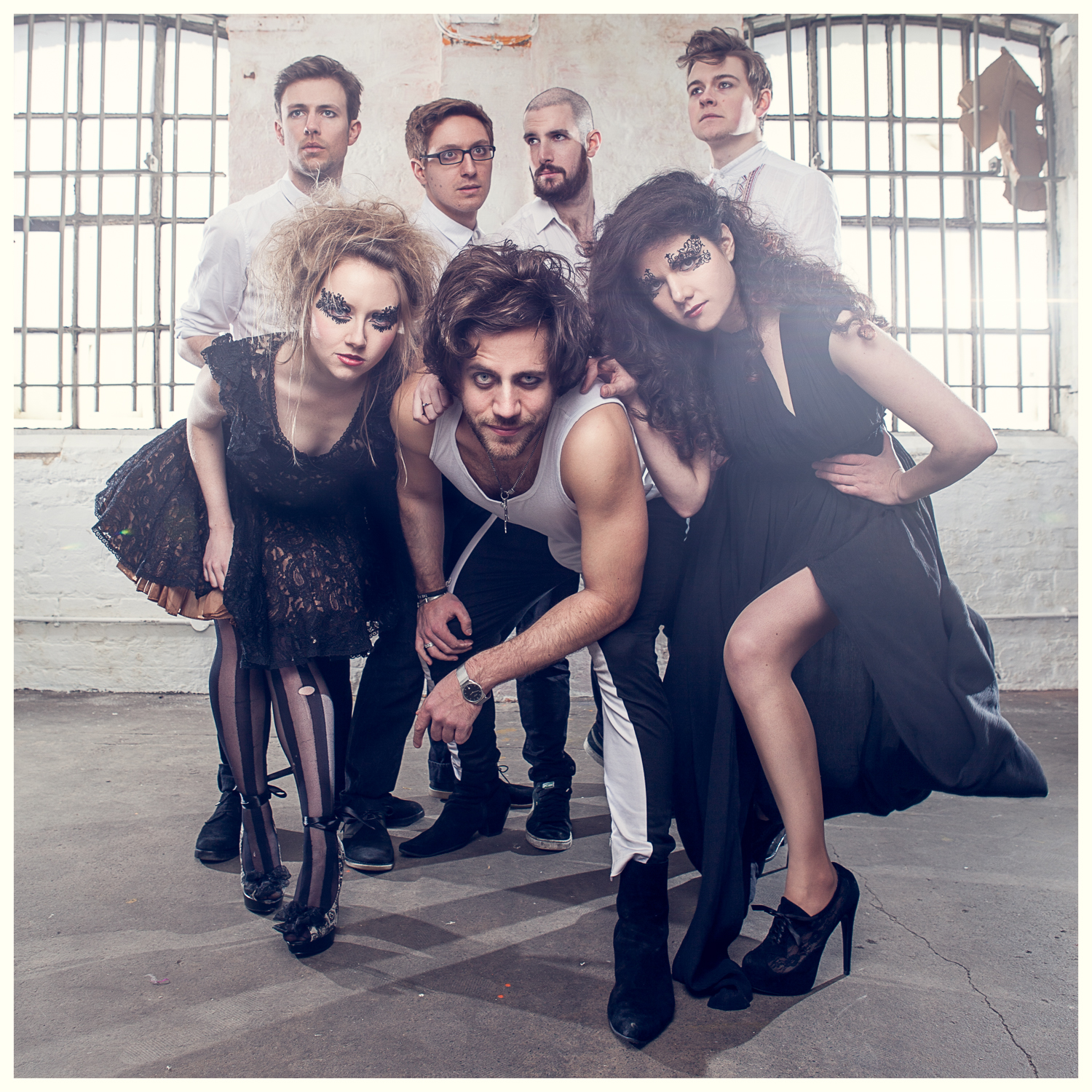 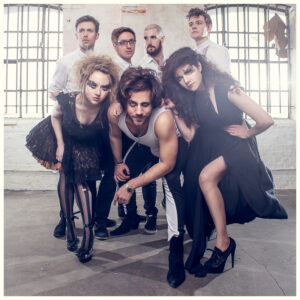 Camp, crazy, and catchy as hell. Felix Hagan & The Family have been infecting everyone whose ears come close to their music with dancing fever, and it’s all because of the latest EP String Up The Entertainer.

Louder Than War’s Ian Critchley spoke to their ring leader about his musical childhood, spandex, lunges, and the shocking fact that this great act are still looking for management.

Louder Than War: Hello! How are you doing today?

Your EP String Up The Entertainer came out in September of last year. Has the reception to it been good?

We’ve had some lovely comments from our fans plus some cracking write ups, not to mention the wonderful one from your good self. The first album was a bit of a mad bundle of theatrical ideas in a million different directions, so for this one we wanted to go POP and make it MUCH bigger. We’re very happy with it. The main addition is the production wizardry of Joe our pianist. The boy’s a genius.

You had quite a nice shout out from UK songwriter Frank Turner on his website ….

That beautiful man. With his marvellous talent and gigantic audience, it’s like he’s been imbued with superpowers. And he uses them to help us. We’re his Lois Lane. His bearded Lois. And it feels great.

He keeps coming to the shows whenever he can, and when he invited us to play with him at the Hatfield Forum last year it was like we’d fallen into someone else’s life. I could evangelise on his behalf for hours. The thing with Frank is that he sees helping young bands as like paying forward the help that bands like The Offspring gave him when he was starting out. Which bespeaks an exemplary level of generosity and humanity. We love him.

I’ve played the EP to a lot of people and everyone seems to dig it, some I didn’t expect to. I played it to metal heads and they loved it! Have you found that a strange variety of people have been getting in touch and coming to shows?

We’ve had everyone from muscle-bound punk rockers with wood glue Mohicans and transgender burlesque dancers to tie-wearing office managers and moustachioed hipster kids coming to see us. We welcome all our beautiful boys and girls with open arms. I think people can sense that we exist primarily for their benefit and pleasure. I like to think that if your ethos is less ‘come and bask in the glare of my brilliance while I stare at the floor and whimper at you’ and more ‘come and dance your arse off with us while we scream, sweat and strain every fibre of our being to entertain you’ then people will understand how much you appreciate them. And that is a nice thing to feel, no matter who you are.

The music kind of treads a line similar to bands like Queen and the Scissor Sisters (not that those two sound alike), a very over elaborate, high energy sound that’s covered with camp melodies. What were the main inspirations for this direction and was it a conscious decision to do something really upbeat or did it just simply slip out that way?

It was a conscious decision for a number of reasons. I grew up thinking of rock musicians as more than human. These divine beings that lived in this other world, cut off from the mundanity of life where you could do extraordinary things. The huge, spectacular opera of it all is what really stirred me and made me want to freak out and flail. Plus, I started out as a drummer. And when drummers write songs they make them loud and fun. Less prodding, more smashing. So I wanted to write music that made people forget everything and just let go. I also, from the second I experienced it to now, love musical theatre. It’s the best thing in the world. Fundamentally entertaining, rammed with narrative, passion, musical skill and emotion, and utterly divorced from ever needing to be cool. And that’s the coolest fucking thing there is.

Your website says that you’ve been performing since six years old. Did you come from a very musical family/background?

My mother was an opera singer and excellent pianist who belted out coloratura soprano solos at the Albert Hall, and my Dad in his younger days was a drummer in a Merseybeat band in Liverpool in the sixties. He used to go and watch The Beatles play in the Cavern every lunchtime. Also, my elder brother is a colossus on the guitar. So I grew up in a house full of instruments. In that sort of environment it seemed like the most natural thing in the world to learn how to play everything. When you’re a kid, being bombarded with Peter Sarstedt, Queen, Vivaldi, Rogers & Hammerstein, Green Day and Pantera every day, things are going to get weird. Lo and behold, a fully grown man in make up and tight trousers screaming musical theatre songs.

A lot of people may not even realise they’ve heard your work before as you do a lot of compositions for TV, the most recent of which is the theme tune of Jack Whitehall’s new show. Is Jack a fan of the band?

Well, all that came about because Jack and I were at school together. Our mutual friend Freddy Syborn had written a play in which I had to play a grumpy pianist who ends up screaming and exposing his cock to the audience. What fun! Anyway, Jack saw this and liked the character, so I ended up going to the Edinburgh Festival in 2011 and performing in his show Backchat (sadly the clothes had to stay on). We then did it all over the place in bigger and bigger venues, then it went to TV. And I got do my first theme tune, which was ace. One day I shall entice Jack to a gig, but right now I don’t think there’s a harder working man in Europe. Although I did get to be his guitar-soloing body double in a TV show the other day. But that’s a secret.

It seems like you’ve got quite a large celebrity backing. This can only work to the advantage of your band, right?

Yes. Bring it on.

A composition you worked on is currently Number 1 in the iTunes classical chart. Are you worried that your endeavours as a rock musician might tarnish your reputation in genres like the classical scene?

Ha! Well I’m afraid that was my very first foray into the classical world. There’s not much call for spandex, lunging and eyeliner down at the Wigmore Hall. Anyway, we’re not Number 1 any more. We were ousted by Andrea Bocelli. And to be able to even use that sentence is a thrill in itself.

And finally, though it’s an awful cliché, what’s next for the Family?

We’ve had an amazing time this last year going all round the UK playing to bigger and bigger crowds, and now we want to start venturing overseas. We’re currently hunting for bookers and management to help get us on the road, and hopefully we can bring this big idea to life.

But in the meantime we’ll just keep doing more videos, more songs and as many gigs as we can possibly do. If you’d told me last year that we’d soon be playing to thousands of beautiful people with Frank Turner I would have laughed bitterly and called you a mad fantasist. But it turns out that wonderful things do happen. So we’ll just keep working at it. Because it’s bloody good fun.