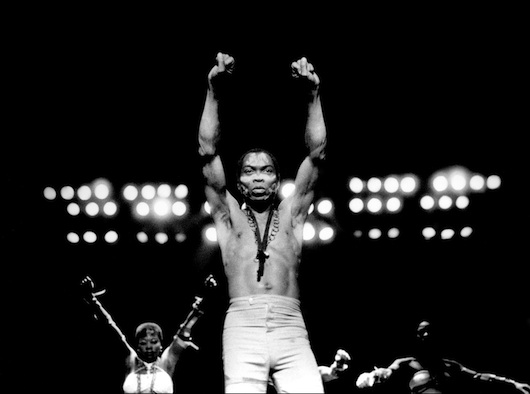 Timed to coincide with the release of Finding Fela – the definitive documentary about Fela Kuti – Knitting Factory Records are releasing six of Fela’s most important albums on vinyl for the first time since their original vinyl release in Nigeria in the 70s and 80s.

Early indications are that the documantary is going to be this years Man On Wire, Senna, The Act of Killing or Searching For Sugar Man – an exceptional documentary that’ll feature on many film writers end of year lists. The buzz building behind it has been growing and growing ever since it premiered at Sundance in January. Directed by Academy Award® winning director Alex Gibney it’s billed as “an utterly compelling and hypnotic portrait of visionary Nigerian musician and social activist, Fela Kuti” – and we at Louder Than War can’t wait to see it!

The film explores both Fela’s extraordinary courage in the face of implacable opposition, and his exceptional musicianship with the story being told through the eyes of musicians, friends, family members and those that knew and admired him, from near and far.

With the excitement ramped up thanks to the film it only makes sense for Knitting Factory Records to capitalise on this and do some serious reissuing. They already released  the complete works of the Afrobeat originator over 26 individual CDs and box sets last year but now it’s the turn for us vinyl obsessives to get executed because, in response to popular demand, six of Fela’s most important albums will be reissued on vinyl this Autumn.

This will be the first time they are released as individual vinyl albums since their original vinyl release in Nigeria in the 70s and 80s.

Check out the trailer for the film, (soundtrack due out 1 Sep and the film 5 Sep) and an extended cut of Sorrow Tears & Blood below: