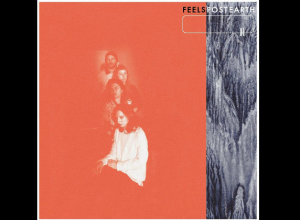 You get the feeling FEELS really should have emerged about 25 years ago, when they could – would – have been poster girls for the Riot Grrrl scene. But they were barely born at the time.

Luckily, there’s always going to be a place in our hearts for Girls With Guitars and the East LA quartet’s twin-guitar twin-vocal brand of lo-fi noise-punk is never going to go out of fashion. Song titles are as short, sharp and to the point as the sound they make: Car. Sour. Flowers. Anyways. Tollbooth. They riff and they grind and they change key and melodies interweave and intersect beneath the squall, sounding sweet and sour in equal measure.

Opening tune Car sets the scene with a DIY punk riff and a smart lyric that sets the scene for the album’s theme of post-millennial angst: “All smiles DJT / War dogs on the street / The land of the free / One nation under fraud”. So far, so political on an album that is intended as a call to arms. “It wasn’t intentional to write a politically charged record,” says bassist Amy Allen, who constitutes FEELS with Laena Geronimo (guitar/vocals), Shannon Lay (guitar/vocals), and Michael Perry Rudes (drums). “But the way the world is functioning right now made it impossible to write about anything else. We all need to figure it out; we’re running out of time. The golden age is over.”

“If you have any kind of platform, you should use it for good,” adds Lay, with Geronimo summing up what FEELS are aiming for: “If our wildest dreams came true, the album would sound exciting to people while also inspiring awareness and action against hate, prejudice, greed, the destruction of our environment…apathy’s not cool and toppling oppression could be fun if we do it together!”

The daughter of original Devo drummer Alan Myers, Geronomo combines her role as lead guitarist and lead vocalist with a parallel career as a classical and experimental violinist, and has spent a decade adding her session skills to records by the likes of Ariel Pink, Allah-Las and John Frusciante. But FEELS are far from being Geronimo’s one-woman show and very much the sum of their individual parts; vocals and guitar lines intersecting seamlessly and a rhythm section – Lay’s melodic basslines and Rudes’ propulsive sophistication – in perfect sync.

When it comes to reference points, you can go all the way back to the Seventies (Slits, Au Pairs) through the Nineties (Bikini Kill, Sleater-Kinney) through to today (L.A.Witch, Bleached), but these are connections rather than influences, though it’s interesting to learn that Geronimo is involved in an annual Slits tribute in LA, a link to her father’s generation at the birth of punk.

Awful Need is all stop-starts and melodic guitar lines and sensuous, sinuous vocals: a song that could have come from This Is It, if only The Strokes had started out with a female singer. Deconstructed, by contrast, is a frenzied punk thrash with shouty vocals and lyrical references to The Simpsons and, at only just over a minute long, is sure not to outstay its welcome. There’s more to them than those two extremes, however. Find A Way could have come from an old Au Pairs album with its jerky rhythms and angular guitar figures and impassioned call to arms: “Burn all the money / All the flags / All this stupid pride”

There is, as the album title suggests, a post-apocalyptic theme behind these songs, the anxiety in the lyrics matched by the tension in the music, where melodies do not so much interweave as cut across each other as if competing for attention. Whereas their self-titled debut album in 2016 traded on a garage sound, courtesy of a single day in the studio with Ty Segall, this time the songs are given space to breathe and open up by Tim Green from punk iconoclasts Nation of Ulysses (production credits: Sleater-Kinney, Bikini Kill, Joanna Newsom) over a comparatively leisurely eight days at his Northern California studio.

Consequently the album demonstrates more light and shade. Sour, one of the longest songs here at more than five minutes, ambles along on a slacker groove with a hubbub in the background, as if the band is rehearsing with a window open on to a school playground, while the title track is another long jam filled with images of billionaires fleeing a dying planet, with an experimental feel that is explored further in live performance (they’ve just completed a UK tour, but will be back).

W.F.L. starts off all pretty vocal harmonies before lurching sideways as if suddenly overcome by drink or drugs, sounding like a transatlantic version of probably their closest contemporaries here, Goat Girl, while the layered instrumentation of Anyways shows off Geronimo’s considerable skill as a classical arranger before the album comes to a comparatively tranquil close with Flowers, a song that channels Patti Smith in its improvisational approach.

Lyrically, meanwhile, the message of ironic resignation at the times we live in reaches its apocalyptic denouement in Tollbooth: “Everything’s great, all the world’s in flames”. In a statement for the newly released video for Find A Way (below), the band explain their stance: “So much is at stake right now. We’re all wondering what’s gonna happen. Scientists have all these grim predictions for the future if we continue down the path we’re headed…there’s still hope but humanity really has to step it up and make some drastic changes. Will we?”