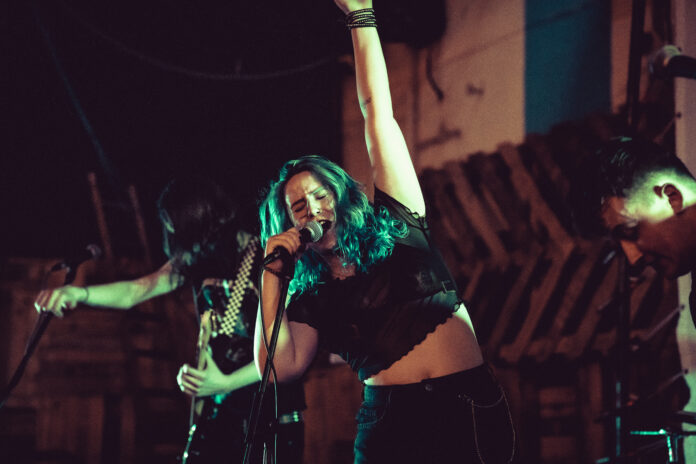 Iain Key travelled to Lancaster to attend his first gig since February 2020. The ‘Fear Records presents…’ promotion featuring Rich Kid Problems, ROLLA, The France and SHADE, here’s how it went…

I walked into Kanteena as SHADE were doing their soundcheck. It hit me that this is the first gig I’ve been to in over 15 months. The longest gap I’ve known between gigs in over 35 years. I’m positive time actually stood still for a few seconds. You know those Marvel movies where 2 characters fight? One swings a punch and you watch in slow motion, waiting for it to land? It was like that. The bass and drums hitting me, snapping me back to reality. Oh, how I’ve missed live music.

The venue itself is relatively new, opening in 2019. A ‘repurposed’ warehouse in the centre of the city. Previous gigs there include LTW favourites The Lovely Eggs, however obviously due to C*vid things have been quiet of late.

Of the bands playing, The France and SHADE are signed to Fear Records. By the time you read this, they will have had sets broadcast on Mark Radcliffe’s Showcase TV series, Live From The Edge. The other groups on the bill, Manchester’s Rolla and Morecambe’s Rich Kid Problems, are both unsigned but have self-released material. They are here on merit, not to make up numbers and definitely worthy of your attention.

It’s the first time any of them have been in front of a crowd for some time. You can feel the buzz throughout the soundcheck; the nervous energy and anticipation of playing a ‘real gig’ building as the afternoon slips into early evening.

RKP are the perfect band to open the night. The local, Morecambe based, 5 piece
fizzing with energy. Lead singer Ray may only be 5’3” (the same height as her idol Debbie Harry) but she owns the stage and vocally packs a punch.

They play a 7-song set packed with tracks from their EP, Plane Crash On A Sunday. It’s punk-pop all the way. Special mentions go to Electric Blue, which slows things down and allows the vocals to really shine, and the new song Karen. (Everyone knows a Karen…)

Finishing their set with Runaway, a track so instantly catchy you’ll think you’ve heard it before, even if you haven’t. Maybe it’s just me, but there is also a slight hint of Dancing With Myself to the opening guitars – definitely Billy Idol-ish rather than Billie Eilish!

A great new band to keep eyes and ears open for and a great start to the night.

ROLLA take the stage exuding the confidence and attitude you would expect from any self-respecting Mancunian band. They may be third on the bill, but if you hadn’t been paying attention you’d think they were headliners.

The way the 5-piece look and line up, with singer James moving around the stage channelling a young Liam Gallagher, make the Oasis comparisons very obvious (and lazy). The boys have more in the locker though. Their sound, guitars especially, owe more to the underrated Twisted Wheel or mid/late 90’s John Squire (Second Coming/Seahorses), particularly on recent single No Violence.

It’s pretty full-on throughout, but new song Life’s Thunder Striking, a little slower and lighter, hints at them growing as songwriters.

ROLLA’s set closes with the popular Sweet Lullaby, leaving the audience feeling like they’ve had an aural slap across the face.

Highlighting the diversity of the Fear Records roster are The France. More Radio 2 than 6 Music, the lads kick off a well-crafted set of uptempo radio-friendly tracks with debut single Indie Kate.

I used to have an issue with The France, but having seen tonight’s performance I realise it was me and not them. Slightly older than the rest of the bands playing tonight, they have a professionalism which my own music snobbishness couldn’t see past. Recent releases Forever Too Long and Better Off Alone wouldn’t sound out of place on a teen movie soundtrack.

Being sandwiched between a couple of Manchester’s up and coming ‘indie rock’ acts could potentially have been a daunting prospect, but The France’s focus and self-belief means they more than hold their own.

Finishing the set with their next single, the breezy California, they are met with rapturous applause (well as much as you’d get with people sitting down!)

Prior to the world turning to shit, this young Mancunian 4 piece were already a live favourite in their home city. After a year’s enforced practice however they’re tight as fuck and hit the ground running as soon as they step onto the stage.

SHADE are everything you want from a headliner from the moment they kick off their set with their second single Head In The Clouds.

They deliver a flawless 45-minute set, focussing on the music with minimal banter. 100% Northern attitude and melodic tunes you can hum and sing along to. When I first heard the band there were some ‘familiar’ influences you could pull out, but now the music is their own, they’ve stepped out of everyone’s shadow. Now it’s just SHADE.

The more mellow and reflective tracks such as Super Cars mix effortlessly alongside more in yer face tracks such as recent single Jump Into Heaven and future release Test Of Time. My personal favourite, Interstellar already has an epic feel to it and doesn’t disappoint. Tonight a couple of phones are lit up and held aloft as they play. Give it a year, and there will be seas of lighters as far as the eye can see. New rocker, I Can’t Sleep, has a harder edge and brings the tempo back up again before the band close on a high with fan favourite Illusive Dreams.

As they left the stage, around where I was sitting, the comments were unanimous. ‘What a fucking band’… I really couldn’t put it better myself.

The fact that tonight was socially distanced, seated and capped at 250 didn’t stop it feeling like a celebration. An extremely welcome return to live music with bands all giving it their all.

Fear Records put on a great show… when’s the next one?