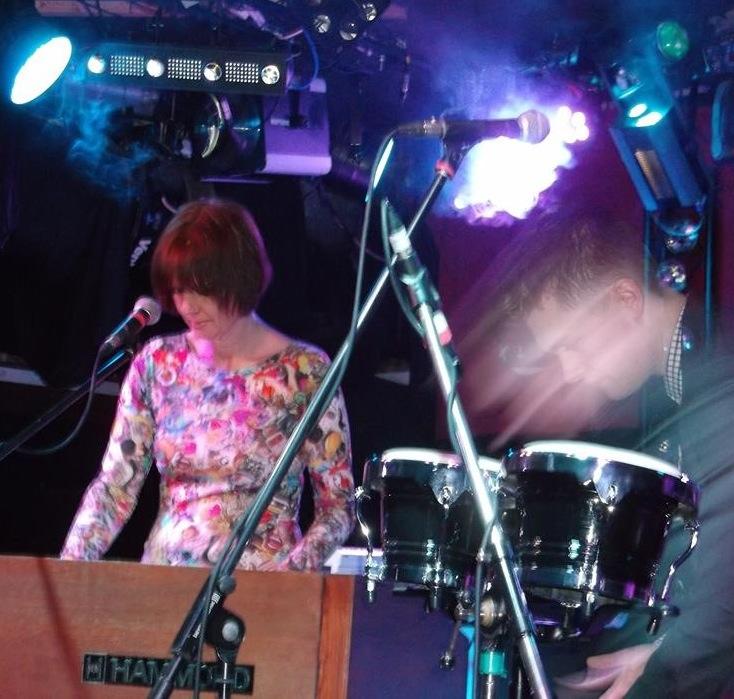 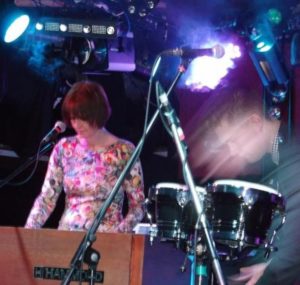 Organised by Tonic, Music for Mental Health, this was a night of Hammond and big tunes by mod legends and twee contenders. Ged Babey reports from the dancefloor.

‘I lo-ooove the sound of the Hammond, it always gives me a hard-on!’ beamed Tommy Overington, singer with  recent Detour Records signings The Rising. His band had played to a full-house at the Joiners the previous night for Independent Venue week, and he was still buzzing when Fay Hallam took to the stage and cranked up her organ.

Earlier the Spiraltones had played a long and varied set which was well received for the most part.  They are a peculiar band in that they don’t settle on one genre but hop, skip and jump thru styles and imbue them all with a warmth and wit.  They are a smiley, happy bunch with a positivity that always baffles me. Their faster, jaunty numbers are a bit C86 in style but the male/female vocal combination still reminds me of The Beautiful South. The ‘Lets Do the Show Right Here’ vibe is created by big characters with small instruments (ukeleles cunningly painted to look like guitars) and is as infectious as it can be irritating but Spiraltones have tightened up a lot and do rock when they want to.

Ending the set with a few country/bluegrass style numbers had a few Mod-ish people turning up their noses  but the Tones seem to have found a lot of fans and go from strength to strength.  The appeal of singer Jo though is partly down to her resembling a young Anne Diamond which means co-singer Colin should maybe brush up his Roland Rat impression.  Lipstick and Tea is still my favourite Spiraltones song and I can’t help thinking that the band would be best served playing open air in daylight on a sunny afternoon at one of the numerous smaller festivals. 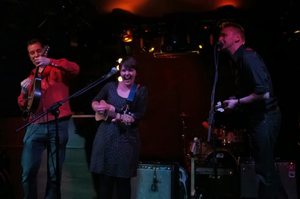 I’m ashamed to say I’m a newcomer to the work of Fay Hallam because somehow she has always been off my radar but she totally rules the underground Scooterist/Mod scene which appears to be in rude health and full of nice geezers & women.  Formerly a member of Makin’ Time and the Prime Movers I learned all I know about her from fellow LTW writer Ian Canty here.

I’ve always loved the Hammond organ sound (although perhaps not quite as physically as Tommy!) from the early James Taylor Quartet material to the Charlatans and digging back to Booker T and Jimmy Smith, despite my enduring love of punk & post punk cacophony. Its hard to explain but it is just a beautiful sound, so much warmer and sensuous than the bleepy harshness of (particularly 80s) synths.  It evokes an imagined past of groovy Sixties optimism somehow. I always think that the origins of  my generations love of the Hammond come from all those 70s TV repeats of the Man From Uncle and shows like that where there was always a nightclub scene which used Hammond powered pop music  to soundtrack the action with mini-skirted dollies with big eyelashes and pale lipstick  shaking their stuff  (drifts off into a little fantasy daydream where I AM Illya Kuryakin) and bossa-nova style cocktail jazz as incidental music.

Anyway, the Trinity’s set was (from what I read on various fans’ Facebooks afterwards!) a healthy mix of old songs and new, from Makin’ Times  Where the Rhythm Takes You, a couple from the 1975 album (2009) to four songs from the latest Lost In Sound album (on Blow Up) which I got hold of after the gig and has been playing non-stop since.

(Goes off at a tangent…)  I don’t own many albums like Lost In Sound. There are two songs which sum it up;  Alive has a chorus that goes ‘You know its good to be alive’ and Dancing has a repeated refrain that says ‘We’re so happy now..’.  Both of these get stuck in your head and make you walk around smiling like a loon (this is not the kind of behaviour one expects of me, Nick Cave fan and miserablist extraordinaire).  They remind me of the music from those 70’s adverts for Nimble  (Honeybus ‘ I Can’t Let Maggie Go’ and the Fifth Dimensions ‘Up, Up and Away’) what gets referred to in some circles as Sunshine Pop.

The fact that there’s a lot of soul and a gospel feel to some of the songs;  I Can’t Cry is introduced by Fay as being ‘for my dad’  shows its not all feel good music. There is a bit of depth and melancholy in there too. The bass part also sounds a bit like the one in the Get Carter theme.

Live, the thing that you don’t notice is that there are two organs, bass guitar and drums, plus Fay and Graham Days son Josh on percussion, but there is no guitar!  And it doesn’t matter, its not needed or missed.

The retro organ sound of Fay Hallam with the Trinity or on disc with the Bongolian has a similar feel to music by hipsters like Broadcast and Stereolab and trip-hop acts like Portishead and Morcheeba, all of whom had degrees of success and recognition (and rightly so, they’re great!)  It seems a shame that Fay Hallam has languished, as they say, in obscurity, despite being loved by select, discerning devotees who, (and I got this off  Keiran the drummer) Keep the Fayth!

She is a delightful and friendly  woman offstage and a really classy lady with a huge talent and a back catalogue I shall be seeking out.   This was a cool gig, as usual with the Cellar, and the Tonic charity deserves your support.

And I’ve STILL got those Happy Now and Good To Be Alive songs in my head, four days on from the gig!

“We’ve got a music and art workshop on 24th April at the Cellar with Vinny Peculiar and the next night a gig with Vinny and the workshop participants.  Should be cool, the artists will be painting the sounds of music being produced. Come along if you can. We are planning more regular events -keep an eye on our Facebook“.