They may be ‘big in Germany’ but their roots are decidedly English. Benji Kirkpatrick, Paul Sartin and Saul Rose team up for another round of touring in the guise of Faustus.

Like fellow folk trio Leveret, in the locale the previous night, Faustus have just returned from Germany, a place that suddenly seems to have something of a pull for English folk music. In a bizarre version of entente cordial, exporting our traditional music to the continent and returning with some Deutscher cold germs in return. Lovely.

A big clap on the back for this gig, not for the three who stand on stage and deliver the musical goods, but to regular travelling companion and sound man Matt who dialled up something magical on his tablet to give the three piece sound a real deep resonance. A rich swell that belied the fact that the creation was the result of just three instruments onstage. 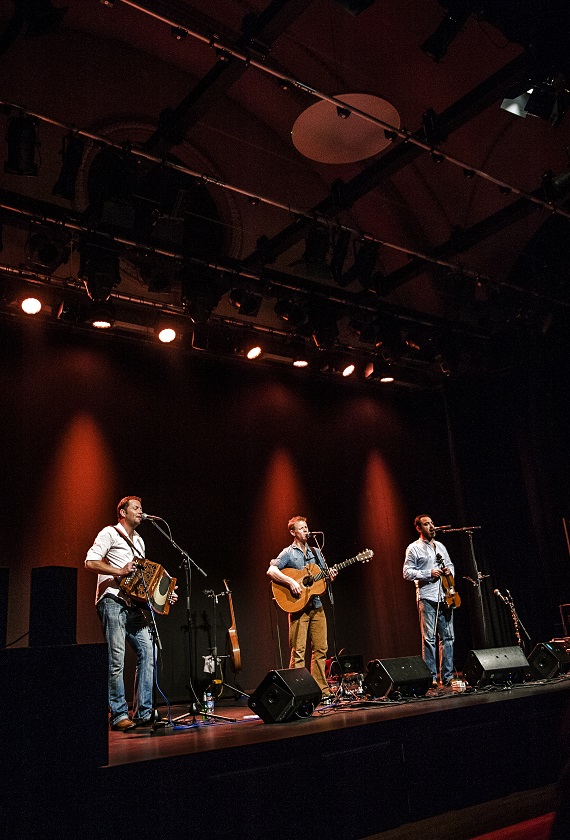 For Faustus, the focus remains on showcasing their most recent work; the Death And Other Animals material  running the gamut from the dark and the ominous danse macabre plod of Death He Goes A Walking to the Harry Kitchener set of tunes that shifted from something like a revved up morris dance to a celtic jig (or reel? – like a rugby ruck or maul, I could never get my head round the difference). Whatever, it was vibrant folk music  with the sort of unbridled  energy, the style of frantic romp that would be right at home in an outrageous big brassy band arrangement.  Slaves and The Deadly Sands take the direction towards the noble and imposing while False Foxes once again recalls  the recurring pulse of  the bass guitar run in Tubular Bells just before the spoken word and instruments start to join in.

Three finer and jolly fellows you couldn’t wish for and they show their mettle in lighter moments when they encore with Broken Down Gentlemen and the straight laced banter that culminates in Benji Kirkpatrick’s Connolly-esque rambling intros – it can’t be easy multitasking on tuning and talking – which are like those puzzles (this one should be Find the route to the song title) where the object is to find the link between George Best and a tuna sandwich in five steps.

It’s always a treat when they dig a little deeper and to hear The Hostesses Daughter – the opening track from their debut album –  and although there was no room for the same album’s Ballina Whalers, any seafaring members of the congregation were catered for with the rollicking Og’s Eye Man.

Like many folk musicians who flit from pillar to post, gigging with one band one night and then in a different combo another, Faustus might be a part time band but there’s no compromise on their return.