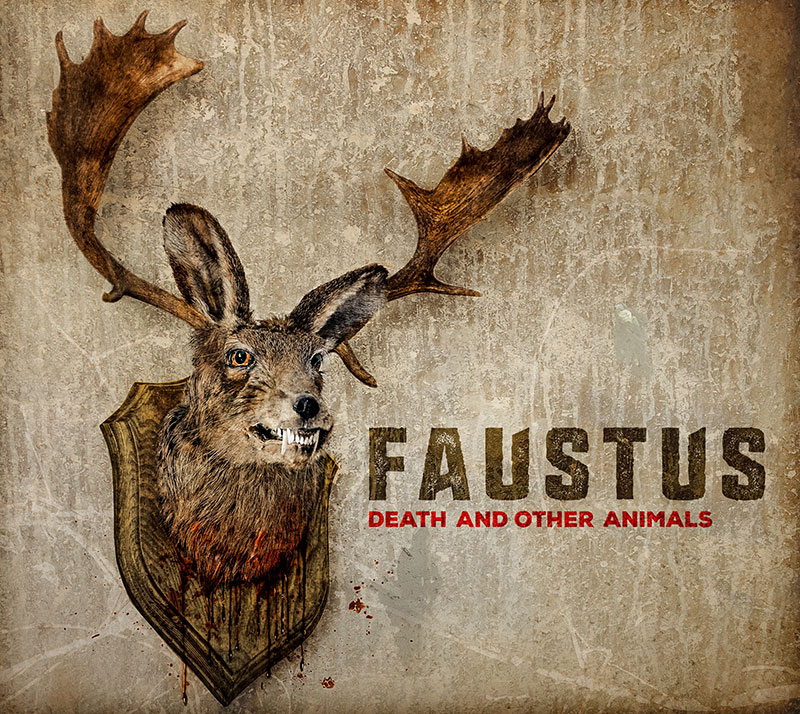 FAUSTUS : DEATH AND OTHER ANIMALS

Their third album from the (quote) ‘bloke folk’ trio. A label  which might be slightly less cringeworthy than being tarred with the  ‘folk supergroup’ brush which often goes hand in hand with Faustus. Anyway.  Saul Rose, Paul Sartin and Benji Kirkpatrick once again come up trumps.

Having previewed some of the new material live earlier in the year (LTW review here)   as part of the deal which saw Faustus take up the position of artists in residence at Halsway Manor  – the National Centre For The Folk Arts –  ‘Death And Other Animals’ goes some way to cementing their reputation as ‘leading lights of their generation’. Leading lights leaving a cosmic trail so blindingly dazzling that you may well need to don a pair of RayBans before listening.  It might also shield you from the unnervingly bright eyes of the stags head printed on the disc like one of those eerie portraits that seem to follow you everywhere…

At the risk of coining an overused yet handy phrase, ‘Death And Other Animals’ does what it says on the tin. Tales of, well, animals and death,  out of  which producer Rupert Christie with his Bellowhead credentials, has coaxed a much fuller  and rich sound from the trio whilst  the Halsway residency has seen them tap the relatively unfamiliar Ruth Tongue collection for a number of  songs in the collection. There’s a veritable assortment of material including some original tunes tagged on, new tunes added to old words and  Bill Caddick’s mournful  and pastoral ‘Oh To Be A King’ which drifts into a stately progression courtesy of Benji  Kirkpartick’s ‘King Of The Discoed’.

From some fascinating origins come all manner of skilfully fashioned works. ‘False Foxes’  contains something  not dissimilar to  the famous bass guitar riff  straight from ‘Tubular Bells’ yet  the album’s portentous epic comes in the form of ‘The Deadly Sands’. Pieced together by Ruth Tongue with  a suitably ominous tune added by Saul Rose,  the  throb of jagged melodeon driving the song on and on to its fatal conclusion. Despite its origins as a sea shanty, ‘One More Day’ could fit easily on something by The Who; a proper riff or as much a riff you can get in a folk context with its hook line of   “rock and roll me over for one more day” and even  a Benji lead break – Paul Sartin must be  practising the Daltrey mic swinging as we speak and cue the lasers for more bedazzlement.

The word is that Faustus are planning to play  the whole album on tour (plus a few old chestnuts of course). For those who though it was only ageing rockers revisiting their halcyon days or conceptual prog rockers who played full albums tip to tail. Maybe more of a sign as to the regard in which they hold the new material.

It’s  in the closing ‘Death Goes A-Walking’ take on the commonly  known ‘Dance Of Death’ (not the Iron Maiden version…)  that Faustus set the seal on confirming  themselves as masters of the crafting and blending the traditional with the contemporary in the guise of modern day  Folk buccaneers.

You can watch the Songs From The Shed performance of ‘Banks Of The Nile’ from their ‘Broken Down Gentlemen’ album here: