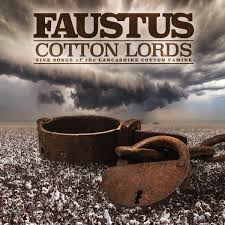 The esteemed folk trio issue a new mini collection that comes inspired by sifting through writings that mark the story of  the 19th Century Lancashire cotton famine. If that’s not folk then what is?

They’ve been busy bees, flitting in and out of  various Faustus related projects alongside  their non-Fausty commitments. Their last album, Death And Other Animals, recorded during their years as Artists in Residence at Halsway Manor, received the 2017 German Critics Award in the Folk/Singer-Songwriter/World Music category while they played a key role in the production of Peter Bellamy’s The Transports folk opera that toured in 2017-8 and recorded an album.

Now finding themselves part of a project based at the University of Exeter to archive, preserve, and rehabilitate the poetry of a particularly  distressing chapter of working-class history, Paul Sartin, Saul Rose and Benji Kirkpatrick have set some of the texts to new music, released on a five track EP by Westpark Music.

The five tracks come very much cut from familiar Faustus cloth. It’s a sombre collection and the subject matter essentially although naturally  quite dark. It seems like the trio are earning a reputation as The Smiths of the folk world. Selecting from over  a hundred poems (there are still several hundred for the project to work on), the class conscious Cotton Lords, published in the Blackburn Times in 1864 by the anonymous author justifies itself on the notion that  “work’s conducive to their health.” The notes from Dr Simon Rennie, the man who initiated (and more importantly found funding – “a fairly substantial budget” from the Arts and Humanities Research Council) the project  add succinct but considerable flesh to the bones.

The Preston and Burnley press seem rich and ripe sources from the material that opens with a strongly grand vocal performance on Cotton Lords while Lancashire Operatives (Starvation) and it’s “pray help us” call adds to the feeling of austerity with a distinct lack of feelgood folkiness. I Wish This War Were Ended tweaks and makes more accessible the original and very opaque Lancashire dialect that comes packed with, amongst other things, enough apostrophes to makes even the most fervent members of the apostrophe correction league shudder. And whilst there may be what Saul Rose has spoken of as “an overwhelming sadness” about the source material, they have managed to find one with some finger pointing anger – Wrongs And Rights coming across  to redress the balance somewhat albeit set to a ‘grumpy’ tune.

Watch the band performing Slaves from Death And Other Animals:

The trio recently took their Cotton Lords songs on tour and we caught up with them quite appropriately at Lancashire’s Helmshore Textile Museum. They’d spent a day doing a song workshop with local schools and took the chance to play a gig in the evening. Set in a plain upstairs space rather than amidst the atmosphere of the mill’s machinery, they ran through a set that showcased all the new songs amidst what’s now become quite a healthy Faustus back catalogue. A pleasure to again hear The Hostesses Daughter with some nice improvised fiddle lines making the most of a technical hitch (out of adversity and all that…) along with False Foxes and the guitar line that always conjures up the bass run from Tubular Bells and a return for The Old Miser from their first album.

Quite apt too that the new songs fit almost seamlessly into the Faustus set with the general air of misfortune and despair (despite the morris interludes) of Death He Comes A Walking and in particular Slaves perfect bedfellows for the Cotton Lords songs. In the presence of Exeter University’s  Simon Rennie, they delivered a typically stout and  stately Faustus performance. 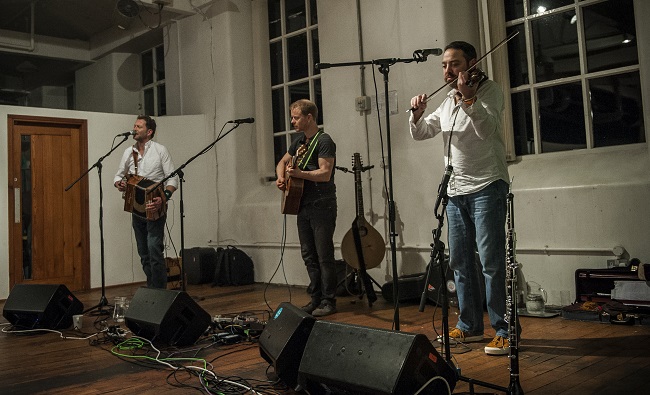