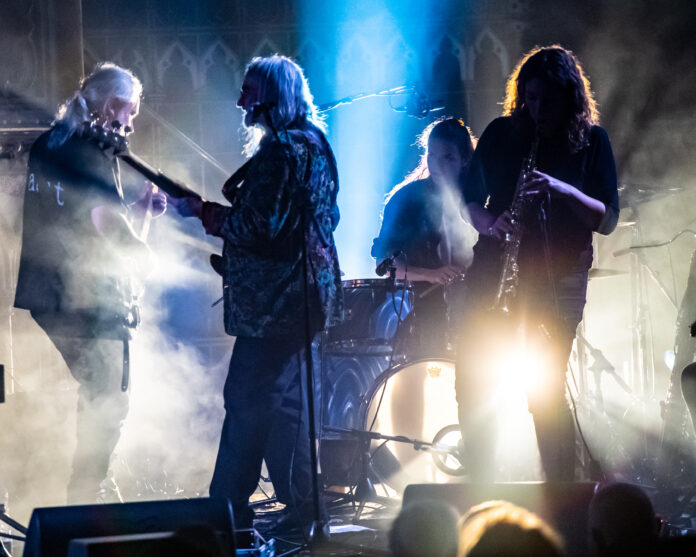 Veteran krautrock experimentalists Faust perform their landmark album Faust IV in its entirety, nearly half a century after its release.

In a darkened church the silence is broken by a disembodied voice telling the packed congregation: “Dream the name and I’ll answer to it.” The voice belongs to Peter Blegvad, from Faust’s fellow travellers and frequent collaborators Slapp Happy. Sadly, ill health means he is present only in spirit. The next voice comes from Jean-Hervé Péron, who is very much present in person, just as he has been ever since Faust first formed in Germany in 1971, now revelling in his role as the sole survivor and master of ceremonies. And it is very much a ceremonial occasion, enhanced by the ecclesiastical setting, with the musicians assembled beneath a pulpit and a glorious stained-glass circular window.

“London is the place where Faust was first welcomed,” he explains to a rapt audience that was expecting to see this show before it fell victim to lockdown, and had probably begun to worry whether it would ever happen. “You called it kraut music, and that became krautrock… You can see we have remained faithful to your tongue-in-cheek term krautrock for 50 years.” There is another English connection to the evening: their seminal 1973 album Faust IV was recorded at the Manor studio in the Oxfordshire village of Shipton-on-Cherwell by five musicians, an engineer and producer Uwe Nettelbeck.

Tonight there are a dozen musicians to perform it in its entirety, although Péron is the only one to have been involved in both. Incredibly, perhaps uniquely, the dozen performers – half men, half women – span every decade down to the newest recruit, 18-year-old drummer Audrey Dechevre. There is surely no other band performing with members in their teens, twenties, thirties, forties, fifties, sixties and seventies. 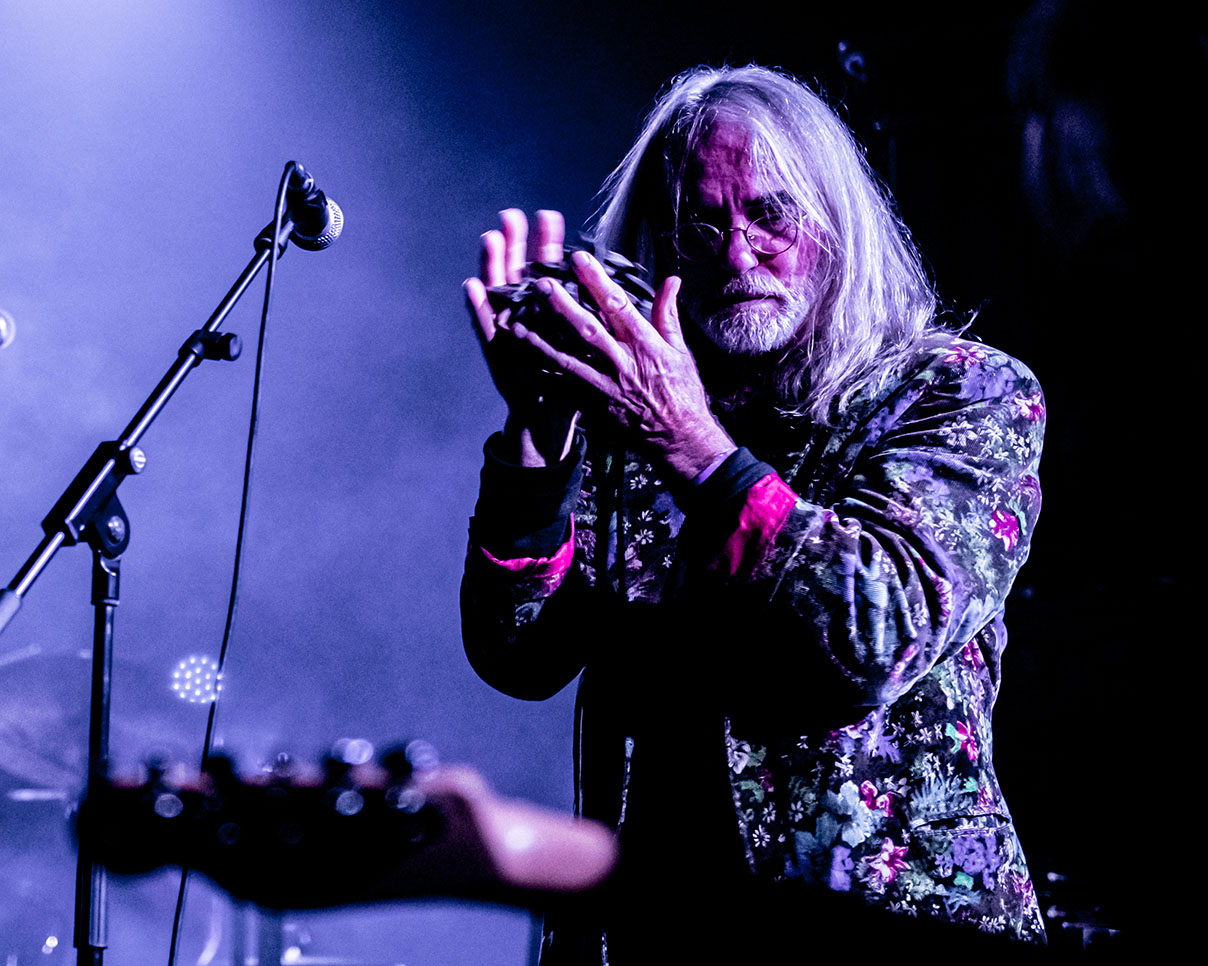 For the first 15 minutes, we sit listening to a soothing string arrangement of Hans-Joachim Irmler’s organ composition Run (untitled on the album itself, where it appeared at the end of Lauft… Heisst Das, Es Lauft Oder Es Kommt Bald… Lauft.) reinterpreted as a minimalist chamber piece for violin, cello and double bass by the band’s Japanese pianist and conductor Yumi Hara, an enthusiastic performer with a passion for extravagant shoes. Like the introductions, it is performed in total darkness, focusing the attention, relaxing the mind, calming the spirits and prompting some concern that this might be like the infamous performance they gave at the Rainbow Theatre in 1973 – the year Faust IV was released – when all members of the band sat in front of TV screen improvising, before getting up and leaving the audience feeling short-changed.

Are we in for another conceptual joke? It’s soon clear we are not, as shadowy figures creep on to the stage with their instruments. The violin piece comes to an end and the lights go up… albeit on the audience. The band can be glimpsed only in silhouette apart from the silver-haired elder statesman at the front. He promises there will be no chainsaws, no cement mixers, no flames – a guarantee that might disappoint those who have followed Faust’s career through the decades.

As you would expect from a group for whom experimentation has been not merely a watchword but the very essence of their being since their inception, the songs serve only as a starting point tonight, the musicians expanding, enhancing and embroidering the material according, it seems, to their intuition. The process seems to stretch into areas that emerge of their own volition rather than according to any kind of pre-arranged plan. It’s a fascinating experience and one that more bands should emulate. 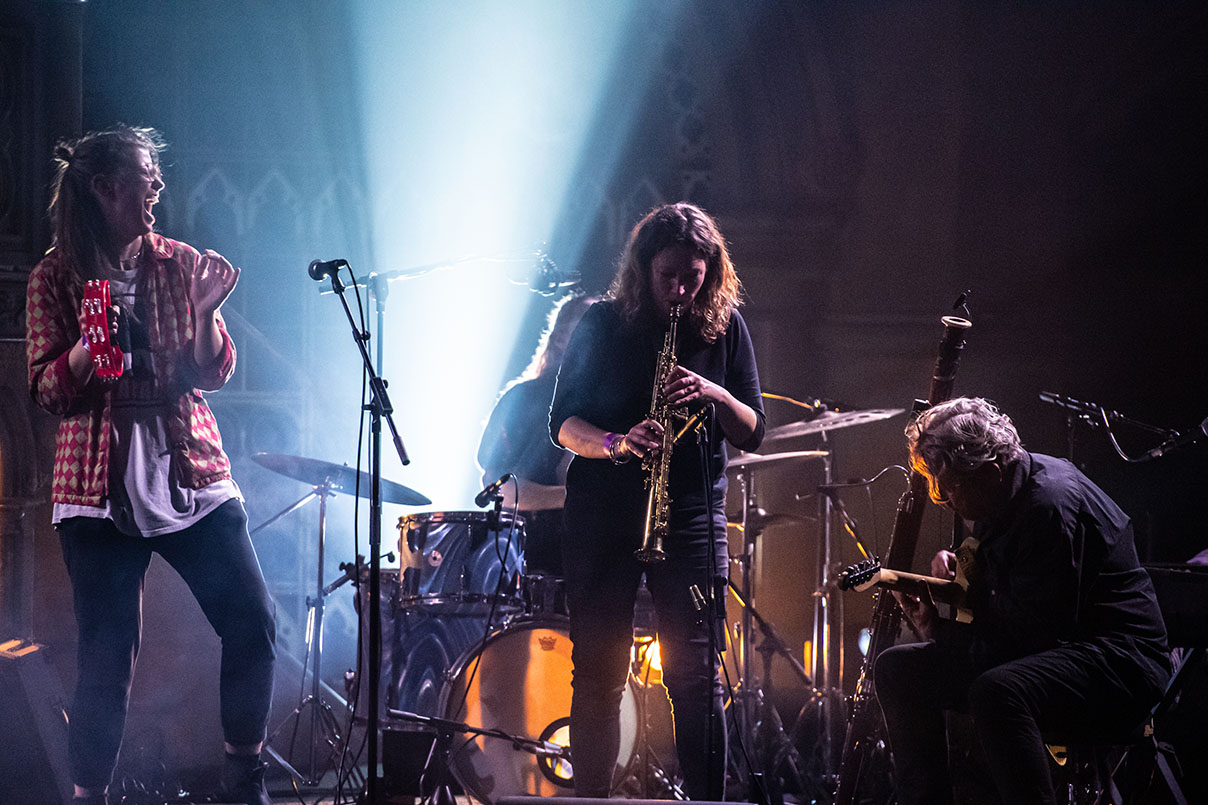 Surveying the sea of silver hair and beards beneath the balcony, it’s clear that most of the audience is of an age suggesting they were introduced to the weird and wonderful world of Faust by that cut-price collection The Faust Tapes in 1973, an early marketing gimmick by Richar Branson at his new label Virgin Records, selling it for 48p. For many, if not most of us, that was a gateway drug that expanded our minds, and our record collections, previously comprised mainly of T.Rex, Slade and Sweet singles, into albums by the likes of Faust, Can and Kraftwerk.

The music made by the intergenerational dozen onstage is immersive, emotionally intense and occasionally overwhelming. The foundations are laid by two drummers of contrasting experience, the 18-year-old Dechevre and 74-year-old Chris Cutler, once of Faust’s fellow travellers Henry Cow. Two, and sometimes three guitarists – Amaury Cambuzat of Ulan Bator, Anthony Moore of Slapp Happy and the artist, film-maker and beekeeper Geraldine Swayne – bring tone and texture, the fluid lines emerging from the mix at times resembling the glissando technique pioneered by Michael Karoli of Can.

There are strings, with Clement Meulemans on double bass, his brother Raphäel, his mane of ginger hair cascading onto his little black dress, playing the cello, and Antonia Mallach on violin. There is brass and woodwind from Chloe Herington on soprano sax and bassoon. There is Yumi Hara, conducting them from behind her keyboards when she is not playing them herself. And there is a girl curled up on the stage as if sleeping, who rises, chrysalis-like to sing Giggy Smile and will be introduced as Peron’s daughter Jeanne-Marie Varain.

Together they make what Neil Diamond might have called a beautiful noise. At times it washes right over you, occasionally right through you; at other times it’s almost recognisable as pop music. Picnic On A Frozen River is as jaunty as Faust get, while the lively rhythms of Giggy Smile create an almost polka-like mood and there’s acoustic guitar and the click-clack of a woodblock in Laeuft… Heisst Das, Es Laeuft Oder Es Kommt Bald… Laeuft.

The simple and affecting Jennifer (not her real name, apparently) is as close as Faust ever got in their career to a conventional pop song, at least in terms of its structure and in simple melody, but surrealism lurks within its minimalist two-line lyric: “Jennifer your red hair’s burning / Yellow jokes come out of your mind.” You don’t get that from Ed Sheran. Then the stage lights up for the first time to reveal all 12 musicians for the album’s oddest and song, The Sad Skinhead, with its reggae lilt and quirky lyric: “I always felt good with you / Going places, smashing faces / What else could we do?” You don’t get that from Adele.

It all ends, as it had to do, with the track that gave an entire genre of music – this genre – its nickname, albeit one Péron used to dislike (he once said he thought the term was “taking the piss”) before coming to terms with it after half a century. Lasting 12 minutes on the record, where it is the opening track, Krautrock stretches out to almost twice that length here, its relentless assault on the senses enhanced by spirals of psychedelic guitar and the sheer volume of it all. I wanted it to last all night – and the next day too – while wondering whether Lou Reed had been listening to this when he came up with the idea for Metal Machine Music.

And then it’s over. Péron assembles his cast onstage like a theatre ensemble or circus troupe and he, the ringmaster, introduces them one by one, before paying tribute to the absent ‘Zappi’ Diermaier, to Hans Joachim Irmler and Gunter Wüsthoff who long ago split to perform with their own version of Faust, and to Rudolf Sosna and producer Uwe Nettelbeck, who have died since the recording of Faust IV.

As applause rings around the ancient church, Péron bows and vows: “See you in another 25 years!”