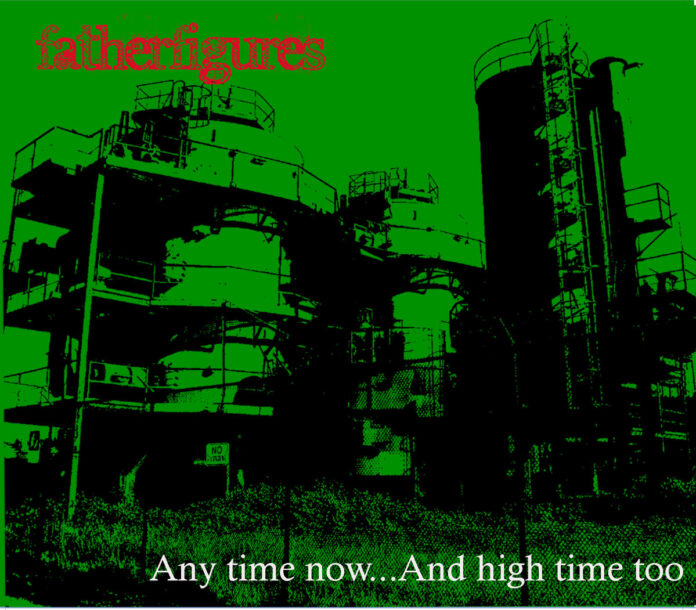 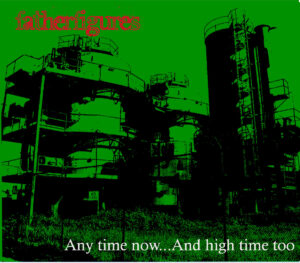 fatherfigures: Any time now… And high time too (Self Released via fatherfigues)
CD | DL
Available now

Debut release from the Leeds based fatherfigures, despite the bands infancy this is fully fleshed, an accomplished release – this may well be due to the fact that all four members have as the band describe “previously been in other bands” most recently as Flies On You; a group assembled to play material crafted by Doug Aikman and Andy Watkins. Watkins died suddenly in January 2018, the surviving members soldiered on, but the spark was gone; as such fatherfigures were born out of both tragedy and necessity, with a desire for a new approach, new material was written and that became this debut album.

Released on CD and bundled with the bonus CD ‘The Lockdown Remixes’ which sadly looks to be becoming both the most unwanted and overused title of 2021, Any Time Now… And High Time Too is 14 tracks of dark angular post-punk, that has a distinctly Northern feel to it. I would suggest the tracks reflect the bands (undisclosed) germs of influences – opener Marilyn builds around a fantastic rhythm, a great bass rumble complimenting a steady drum whilst a spooked guitar adds expanse, the mood is taut, almost strained vocals, which continue into Jesus! which drops some welcome echo into this Interrobang type number that should get even the most lead-footed shuffling across a dance floor.

Think About It had me recalling the mighty Gang Of Four, though this is no mere aping of the band; fatherfigures bring new ideas to the table, the propulsive drums pushing you towards the chanted chorus, clipped guitars deep within the mix and some welcome keyboards add a twisted pop sensibility whereas Bosch has an almost arachnid guitar that loops around the stripped back rhythm ramping up the tension ahead of the line “a packet of Quavers, held up in the air… in alarm” as the drums drive ever forward to the exasperated “she’s tossing him off” as the track reaches its climax (sorry!).

Hissing is a delight, the pace is dramatically reduced and relies upon a haunting keyboard which provide the perfect foil to the gothic tinged vocals – the track pulls off a neat trick sounding both cold, almost disdainful, yet the keyboard draws you in; and having used the goth word its only correct that A Mere Transition sounds like something Andrew Eldritch would be happy to have written, but yet again fatherfigures have their own identity stamped all over this as it builds to a perfectly measured finish.

There is so much here, Landing, and Distressed Behaviour both feature the distinctive thrusting guitars, whilst the later even has nursery rhyme vocals hidden under the barely controlled mayhem – it’s almost psychedelic, whilst Barbara utilises all sorts of sonic wonderment, the track envelopes you dragging you deeper down into the darkness; yet there is humour here – the unnerving vocal of Stockings On as our protagonist plans to spice up his marriage… “put your stockings on my sweet… we’re going to rob a garage” which brings an ‘Up North’ slant to Squeeze’s Cool For Cats.

The entire album is an off-kilter gem, it’s at times unsettling, sharp, anxious even, yet beneath the subversion there are comedic flashes and certainly enough melodies to draw in the more pop savvy.

fatherfigures: Any time now… And high time too