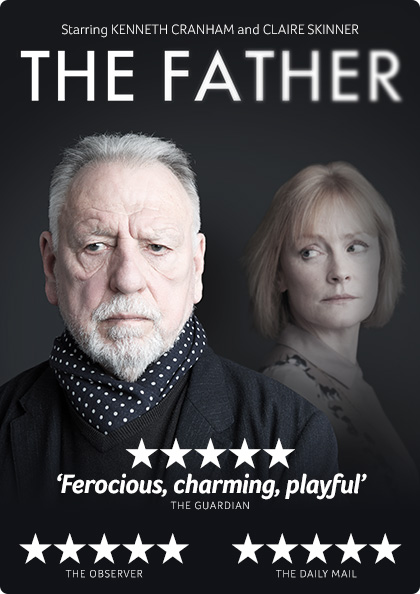 The Father by Florian Zeller

The Tricycle Theatre continues its  run of plays. After the success of Handbagged in its two versions (one acts and 2 acts), they are now presenting The Father a one act play by French Playwright Florian Zeller. Louder Than War’s Craig Chaligne reviews.

First staged at the Hebertot theatre in Paris in 2012, the play has received several Molieres (equivalent of the Oliver’s in the UK). This UK version (translated by Christopher Hampton and directed by James Macdonald) opened one month ago to five stars reviews all-around that resulted in the Tricycle’s website crashing down for 24 hours as people tried to snap tickets. The play closes on June the 13th but all the performances are sold-out.

Set in a Parisian flat, the play charters the gradual descent of Andre (played by Kenneth Cranham) into dementia. It starts off with Andre arguing playfully with his daughter Anne (played by Claire Skinner) about the departure of his third carer following accusations from Andre that she had stolen his watch. As the play continues the extent of Andre’s illness gets revealed. The flat that he thought was his own is in fact his daughter’s and peoples names and occupations become a blur. The deterioration of Andre’s mental state is accompanied by the gradual disappearance of the furniture. Symbolizing the loss of the familiar surroundings of Andre’s home, it also helps the transition of the set to the care home in which Anne is forced to put him in in the end. The plays is cut in small sections with blackouts to adjust the set and the placement of the cast members. There seemed to be some issues with the musical accompaniment during the blackouts at the performance I attended (maybe something wrong with a cable or a scratched cd). Despite these disruptions, the play turned to be absolutely enthralling. Kenneth Cranham manages to balance Andre’s avuncular/charming side with his increasing moments of dementia perfectly. Claire Skinner’s portrayal of Anne, a daughter caught between her love and commitment to her father and the pressures that the set up his generating on her marriage is all self restraint. The play is written from Andre’s point of view so certain scenes are repeated, the characters all start to blend into each other, the time of day isn’t what he thought it was if he hasn’t got his beloved watch. As Kenneth Cranham says on the video promo for the play, professional’s from the care sector says it’s the most accurate account of a patient’s struggle with dementia that’s been written.

For further information on the play you can check its page on the Tricycle website: www.tricycle.co.uk.